Increasing awareness of sexual harassment and abuse endured by Iraqi women on a daily basis has shed light on the need for social institutions to combat this kind of injustice. 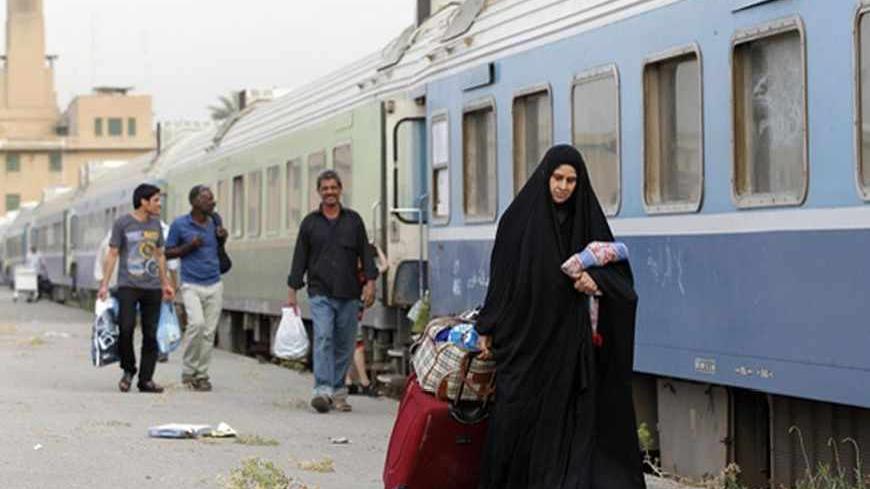 An Iraqi woman walks on a platform at a train station in Baghdad, May 6, 2013. - REUTERS/Mohammed Ameen

Iraqi society stands helpless against increasing sexual harassment, despite dominating conservative values that have prevented people from moving toward social, economic and media openness since 2003.

What makes Iraq different from other communities that suffer from the same problem, however, is that Iraqi women no longer keep their silence about the sexual abuse they endure in a patriarchal society that waives their rights in many areas of life. Moreover, media outlets have started boldly approaching the problem, after timidly dealing with it initially.

Sexual harassment is mostly verbal. Women may be subject to this kind of harassment in the workplace and in public places, with one of the worst scenarios being bosses who harass their employees.

Harassers do not care about the social status of women, and whether they are married or not.

Increasingly, harassment of teachers by students or employers by employees occurs, thus revealing new ethics in Iraqi society that result from a serious social upheaval.

In an interview with Al-Monitor on July 25, Iman Kamel — a sports teacher from Babylon, 100 km [62 miles] south of Baghdad — avoids talking about the molestations that she, and many of her female colleagues, are sometimes exposed to by co-workers. They seek to protect their reputation for social and ethical reasons, while trying to avoid tensions in the workplace.

Iman also recognizes the main problem to be "when a student harasses a teacher. Many teachers have complained about this phenomenon that prevents the establishment of a healthy and positive relationship between the teacher and her students.”

Feminist activist Siham Hassan from Karbala, 108 kilometers southwest of Baghdad, said in her interview with Al-Monitor on July 26, “Keeping mum about the phenomenon only further exacerbates it; when women decide not to talk, they are deemed weak. Also, harassers find themselves in a superior position, and no one can stop them from doing what they’re doing.”

Given her experience in feminism and the fact that Iraq does not provide accurate statistics of the spread of sexual harassment, Siham estimates that “nearly four out of 10 workers are subject to sexual harassment, and the phenomenon takes place more frequently in professional environments where males and females work together.”

Siham also emphasized, “The phenomenon is widely taking place in public places such as gardens, parks and local plants and factories, where sexual harassment is on the rise as shown by the rate of its daily occurrence.”

For her part, Kawthar al-Naimi, the owner of a beauty salon in Baghdad, revealed in an interview with Al-Monitor on July 28 the truth behind harassment through the stories of her clients, who have different levels of education. Naimi notes, “The phenomenon is more mentioned by those who are uneducated or who have received a low level of education.”

Due to concerns about the interference of men in her work or clients having to endure the curiosity of men, Naimi hired a young man to whom she is related in an effort to ward off such scenarios.

Naimi calls for a “tough stance on the part of women toward harassers,” adding that “they should not allow themselves to fall victim to male sexual instincts.”

In her interview with Al-Monitor on July 26, Aseel Hassan, a student at the University of Babylon, says that she chose another direction in the hope that sexual harassment had not spread to academic circles. However, similarly to what the other interviewees experienced, she affirmed that sexual harassment is not only limited to individuals with low educational levels.

“I have been the victim of verbal sexual harassment several times, and I had to listen to very immoral words,” she admitted.

“Men usually give girls inappropriate looks and make suggestive comments about their beauty or describe their body’s sexual features in admiration, in an effort to get these women to date them,” she added.

Cleric Hassan al-Yasiri from Babylon said in his interview with Al-Monitor on July 27 that he believes “when a girl excites a man with her daring clothes and excessive makeup, it leads him to molest her," noting that “women who wear makeup usually catch the attention of men” and calling for “the promotion of religious values ​​to ward off evil.”

Aseel, however, rejects this concept, arguing that Yasiri’s ideas “are based on reactionary grounds, and do not have a logic that makes them acceptable.”

Between the two views there is a third opinion. This one is put forth by social researcher Fatima Hussein from Baghdad in her interview with Al-Monitor on July 29. Hussein confirms that “both veiled and unveiled women are subject to sexual harassment, and this creates a sense of frustration and inferiority among women, especially when they hear phrases containing sexual insinuations.”

“Iraqi women do not even accept compliments such as 'You are beautiful,' even if they feel flattered deep down inside. Their conservative values ​​do not even allow them to respond to such compliments,” she added.