Plastic surgery is on the rise in Iraq as more and more young women rebel against conservative social norms and traditions. 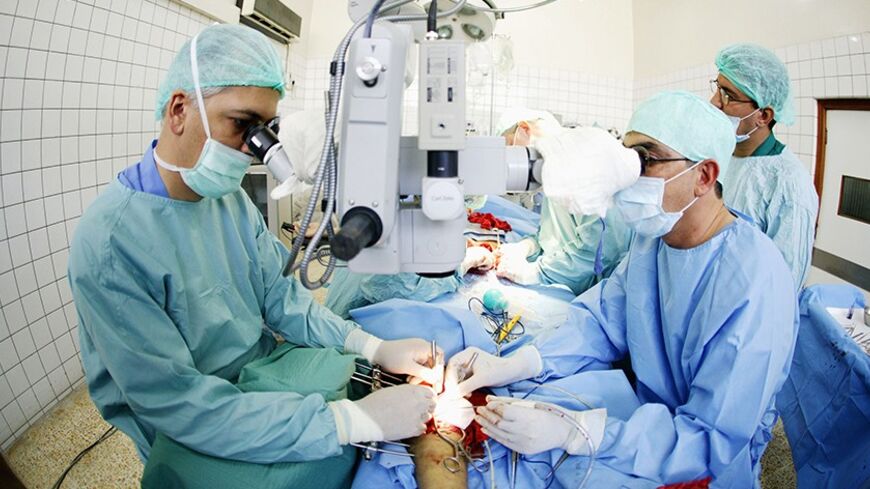 A plastic surgeon at the Al-Wasity Hospital in Baghdad performs an operation, June 6, 2004. - Brent Stirton/Getty Images

There has been a debate on Facebook among Iraqi activists about what has come to be known as "artificial beauty," that is, plastic surgery, which some consider to be a mask. This phenomenon is not new to Iraqi society, but it has become more prevalent in recent years, as if the product of the new political and social era. The online debate reflects a real controversy in society, because the plastic surgeries being performed are making women look alike.

Of particular interest, plastic surgery is thriving at a time when conservative religious and political rhetoric prevail, and the Islamic "veil" has turned into a mere head covering. Exaggerated makeup, plastic surgeries and exaggerated femininity reflect an openness in society that is in direct conflict with the dominant political trends, which have adopted a religious rhetoric and given high priority to behaviors based on religious customs.

Thaeera Chamoun al-Bazi, director of Iraq Paradises, a cultural media institute, told Al-Monitor: "Plastic surgery in Iraq is gradually turning into a collective obsession that is approaching addiction for some women, especially those who are insecure or who seek attention. These women turn to Botox fillings, which have become more rampant than ever."

Cosmetic operations are in full swing at the Amal Beauty Salon in Babel, south of Baghdad, where conservative society is being confronted with a new openness. Speaking to Al-Monitor, Bouchra Hassan, the owner of the salon, observed, "The work of beauty salons has boomed. Their numbers increased following 2003, which is further proof that cosmetic surgeries have become increasingly popular."

The writer-poet Salah Hassan, who has written critical, analytical contributions on issues of aesthetics, shared with Al-Monitor, "Iraqi women have always been known for their unique beauty. However, they are always hidden in houses and covered in the streets, so as not to attract attention."

Hassan said that there is now an “absence of beauty” in Iraq, asserting, “Daily violence as well as religious, political and social policies have smothered and insulted the beauty of women." He also noted that ethics have changed. These days, attractive women are sometimes referred to with a distasteful and revolting word. "There is also a new illiterate generation that is incapable of finding synonyms for the words beautiful and gorgeous, Hassan alleged. According to his observations, "In Iraqi society, every pretty woman is seen as a sex object, nothing more."

Reem al-Saffar, a social researcher, told Al-Monitor: "There has been a drastic change in social concepts. Veiled women are no longer necessarily conservative. On the contrary, today they outrank unveiled women in turning to facelifts, artificial eyelashes, and hair dye, as the veil is no longer a 'religious duty' as much as it has become a ‘social habit.'"

Al-Monitor also spoke with Sattar Kawoosh, an artist known for paintings depicting femininity by highlighting the stylized beauty and features of Iraqi women. "Although not all [women get plastic surgery], it is has become very obvious [in society]," Kawoosh contended.

"The majority of women want to compensate for the suffering they endure under abnormal conditions. It is only natural for humans to want to showcase their beautiful qualities. Women, in particular, turn to makeup and adornment to flaunt their external beauty, which reflects the beauty of their souls and their femininity," Kawoosh asserted. He added, "Many Iraqi women have charming faces. However, they wear a lot of makeup, smearing their faces with more colors than an artist puts on his canvas."

Kawthar Husseini, a student at the University of Babel, told Al-Monitor: "Many girls are more concerned with their looks and beauty than with their studies. This is due to a number of reasons, including the fact that they want to rebel against customs and traditions in this era, which is characterized by rebellion and a desire for change. As for conservative girls, they seek to flaunt their beauty to attract men in a society where the number of unmarried women and widows is on the rise."