As Iraqi women expand their presence in the workplace, they are increasingly subjected to sexual harassment, including at public institutions. 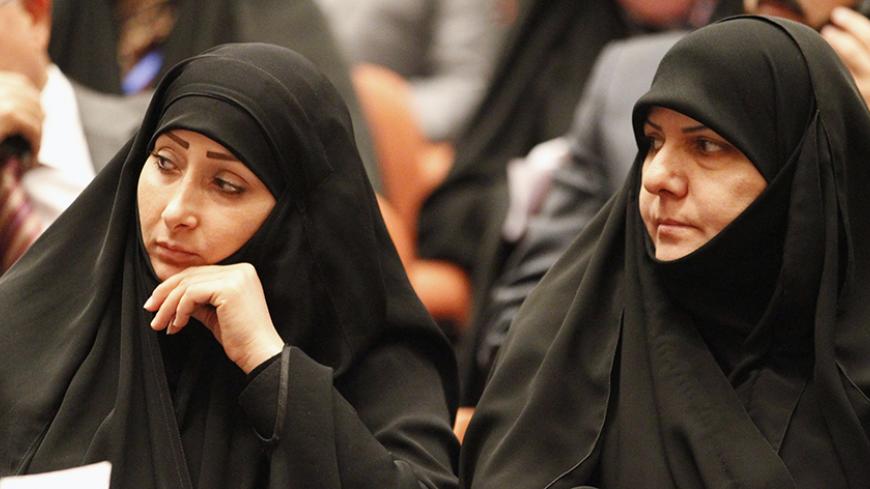 Female members of the new Iraqi parliament attend a session at the parliament headquarters in Baghdad, Iraq, July 1, 2014. - REUTERS/Thaier Al-Sudani

BAGHDAD — Iraqi women are dealing with worsening harassment in the workplace and sexual abuse in general, according to statements made by Iraqi members of parliament and media reports.

On Jan. 15, 2017, parliament member Aaliyah Nasif revealed that she has been receiving complaints of sexual harassment of female employees in a number of ministries, while on Jan. 17, Education Minister Mohammad Iqbal dismissed the director-general of the ministry for soliciting sexual favors in exchange for a promotion.

On Jan. 17, a Finance Ministry employee told Al-Aalem newspaper that her division director trapped her in the “vault,” the place where documents are archived, after she refused to become his secretary, a position that would have entailed harassment by him.

Kurdistan Alliance parliamentarian Rizan Sheikh Dalir, who was interviewed in the report, told Al-Monitor, “Women are perceived as inferiors by the male politicians. This is why even women MPs had to deal with harassment during parliamentary sessions,” adding, “They would bully a woman MP by saying that there are no laws that prohibit polygamy, which is derogatory to women.”

In a Jan. 14 article for al-Hewar al-Motamaden, writer Dawood Salman al-Kaabi argued, “It is possible that MP Aaliyah Nasif, who blew the whistle on the sexual harassment of female employees, had been subject to it herself by some MPs with whom she had altercations.”

While there are no statistics available for the past year on harassment in Iraqi society, a report published in September 2015 by a conference of Iraqi civil society organizations revealed that 77% of Iraqi women have been victims of sexual harassment.

Although women often avoid admitting that they were harassed for personal and social reasons, journalist Safaa Ali told Al-Monitor, “I have indeed dealt with sexual harassment myself, and I had to step away from this embarrassing situation immediately,” adding, “Other colleagues were also subject to verbal and physical harassment.”

In an interview with Al-Monitor, journalist Hiba Noureddine said, “The phenomenon is growing worse. MP Nasif and the Iraqi Women's Journalists Forum reflected this fact.” She went on, “Some officials and colleagues see women as only bodies.”

Qassem Hussein Saleh, head of the Iraqi Psychological Association, told Al-Monitor, “The phenomenon has become widespread, especially in public institutions. It is due to the pervasive political corruption, which is closely connected to the moral crisis.”

Saleh offered his psychological analysis of the phenomenon: “Many officials with modest educational backgrounds have not been exposed to gender mixing and cultural openness at university and throughout their careers. Sexual harassment was a way to compensate for personal and social restraint.”

Rehab al-Abouda, the head of the parliamentary Committee for Women, Family and Childhood, told Al-Monitor, “Harassment is prevalent in the workplace and high-profile institutions. However, female victims almost never file a complaint to avoid shame.”

Jawad al-Shamri, the media director at the Iraqi High Commission for Human Rights, told Al-Monitor, “This phenomenon is … a result of the financial and administrative corruption in the country.” He explained, “The physical and verbal harassment of women in the workplace is a violation of international human rights declarations.” Shamri pointed to “a complaint filed by a female journalist at one of the Iraqi TV stations after she was subjected to sexual harassment, forcing her to quit her job for good.”

Iraqi researcher Rabi’a Shaker al-Obaidi published a study on Jan. 16 revealing other contributors to harassment, such as unequal educational practices that lead to an unequal social perception of men and women and family disintegration as well as offenders' low self-esteem, which can lead to the failure to establish healthy relationships and even violence.

Journalist Asmaa Obaid expressed pride in Iraqi women and told Al-Monitor, “Although Iraqi women were able to enter many sectors like medicine, engineering, the media and politics, they are still objectified and perceived as maids.” She stressed, “Sexual harassment is the product of a patriarchal culture,” and, “Whether they wear hijab or not, women face sexual harassment.” Obaid called for “deterrent laws to put an end to this phenomenon.”

In the Iraqi Penal Code, Paragraph 400 of Section 3 covers "immodest" and "shameful" acts. It states: “Any person who commits an immodest act with a man or woman and without his or her consent is punishable by a period of detention not exceeding one year plus a fine not exceeding 100 dinars.”

Obaid believes that such punishments are not strong enough deterrents, and that harsh sentences alone are incapable of ending an entrenched social phenomenon like sexual harassment. Social awareness campaigns are needed to help citizens, both men and women, realize that women must not be treated as second-class citizens, she added.