Both Israeli and Palestinian children are paying a high price in lifelong trauma for politicians' violent and careless promises. 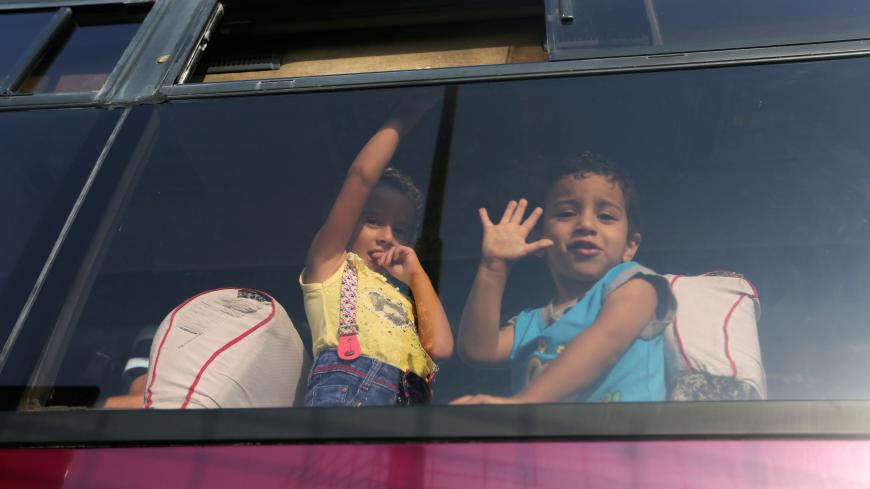 Palestinian children look out through a bus window as they wait with their family to cross into Egypt through the Rafah border crossing after it was opened by Egyptian authorities for humanitarian cases, in Rafah, in the southern Gaza Strip, Aug. 27, 2017.

The papers reported that two rockets fired from Gaza on Dec. 18 had landed in the Israeli border town of Sderot and in a community south of the coastal city of Ashkelon, “causing damage but no casualties.” The next item read that Defense Minister Avigdor Liberman said while touring the Gaza border region the following day that the government had known there would be a cost for US President Donald Trump’s Dec. 6 recognition of Jerusalem as the capital of Israel. “Such things appear to have a price that’s worth paying,” the minister said, not forgetting to praise the “optimism and high spirits” of area residents.

The same day, Liberman declared his “full backing” for the soldiers who displayed restraint when a 16-year-old Palestinian girl, Ahed Tamimi, slapped them recently in what some quarters claim was an effort to provoke a response. The soldiers proved that the Israel Defense Forces are “an ethical army guided by moral values,” he said.

Tamimi is one of 45,000 Palestinian minors arrested by Israel during its 50-year occupation of the West Bank. Some 64% of them reported being beaten during their detention, according to data issued this week by Military Court Watch, an organization that monitors the detention of children by the Israeli military. The Israeli troops who subsequently arrested Tamimi were high school students themselves until a few months ago. Many of their fellows who detained Palestinian minors during their military service bear emotional scars caused by their experiences as soldiers. A few bare their souls to Breaking the Silence, an Israeli organization opposed to the occupation, or join the group in an effort to ease their distress. Others carry with them the trauma, often unaware of it or its consequences.

Let us start with the price paid by the Israeli children living in the constant shadow of rockets and mortar shells from Gaza — for example, Ido Gabbay from Sderot. Gabbay spends most of his time in the family home’s secure room and almost never leaves his house. During one of his anxiety attacks, triggered by the thunder of overflying fighter jets, he used a pen to pierce his skin until he bled.

Maozia Segal, director of social services of the Hof Ashkelon local council, described in an interview with Yedioth Ahronoth how children can experience flashbacks every time they hear a rocket fall or a siren warning of incoming rockets. Educational psychologist Tamar Lavie, director of community services at NATAL, the Israeli Trauma and Resilience Center, described in the same article how little things can set off residents’ emotional distress. Triggers can include a news report about growing tension in the region, planes taking off from a nearby military base and certainly the firing of Qassam rockets and warning sirens. The continued conflict with no resolution in sight undermines the recovery process, she added. Lavie talked about children and teens afraid to sleep alone in their beds, take a shower with the door closed or stay home alone, children who revert to bed-wetting or cling to their parents, who don’t dare go far from home or walk around by themselves for fear that terrorists could reach their communities and even their homes.

Similar incidents, also with “no casualties reported,” occur in the West Bank as well. There, too, children pay the price that Liberman and his friends in the government and the Israeli West Bank settlements think is “worth paying.” Do these government ministers ask themselves what 13-year-old Israeli children go through when they are taken on a Bar Mitzvah trip near a Palestinian village, as occurred on Nov. 30, and come under a hail of stones thrown by angry Palestinian residents and have to hide in a cave until Israeli troops rescue them? One of the boys, Avitzur Libman, recalled, “All the children started crying and saying ‘Shema Israel,'” referring to the prayer that Jews utter when facing death. Israel will be paying for years, with compounded interest, the heavy price of the post-traumatic stress to which politicians like Liberman are condemning future generations.

The suffering of Israeli children is nothing compared to that inflicted on Palestinian children by the conflict between the adults. According to a 2015 study published in the British Journal of Education, Society & Behavioral Science, children were the most vulnerable group during the fighting that raged between Israel and Gaza in the summer of 2014. Four of 10 Gaza children have been diagnosed with post-traumatic stress disorder, and 30.9% with anxiety disorders. Israeli psychologist Mohammed Mansour, who visits Gaza as a volunteer for the Israeli organization Physicians for Human Rights, told Haaretz, “All the children in Gaza have wounds from the blows they give and receive.” Over a third of children aged 5 to 13 he met in the Jabalya refugee camp in Gaza reported sexual abuse. In Gaza’s harsh climate of tension and violence, many parents suffer trauma and depression themselves and are unable to support their children, protect them or provide their most basic needs.

Politicians, who think a meaningless declaration by an American president is “worth” the suffering of Israeli children, cannot be expected to display empathy for the suffering of Palestinian ones. However, they should be expected to understand that a Palestinian boy from Gaza whose mother is killed by an Israeli mortar shell in front of his eyes is a ticking time bomb threatening the children of the neighboring Israeli town of Sderot. His trauma as a child will be surely translated into anger and hate as an adult. The study published in the British Journal of Education, Society & Behavioral Science found that 91.4% of the children interviewed said their religious beliefs were a source of strength for them. It doesn't take an expert on terrorism to predict that many of them will eventually sign up for service in Hamas or another movement in Gaza.

Psychologist Shafiq Massalha, who studied the dreams of Palestinian children, wrote that his findings raise troubling questions regarding their mental health, their view of the world in which they live and the manner in which they perceive Israelis. The hardships experienced by the current generation of Palestinians, Massalha adds, as reflected in the dreams he studied, raise the question of whether there will be any room left for reconciliation and the creation of normative relations between the two people. Will the perpetuation of the current state of things widen the gap between the sides, what experiences will have to be nurtured in order to bridge this gap and how long it will take? Until then, hundreds of thousands of Palestinian and Israeli children will keep paying the price for the nationalist and religious fanaticism of the politicians — grown men and women willing to sell the fate of future generations for a pittance.