Palestinian President Mahmoud Abbas has announced that he will apply for Palestine to join 22 international agencies and organizations to which Palestinians have a right to full membership. 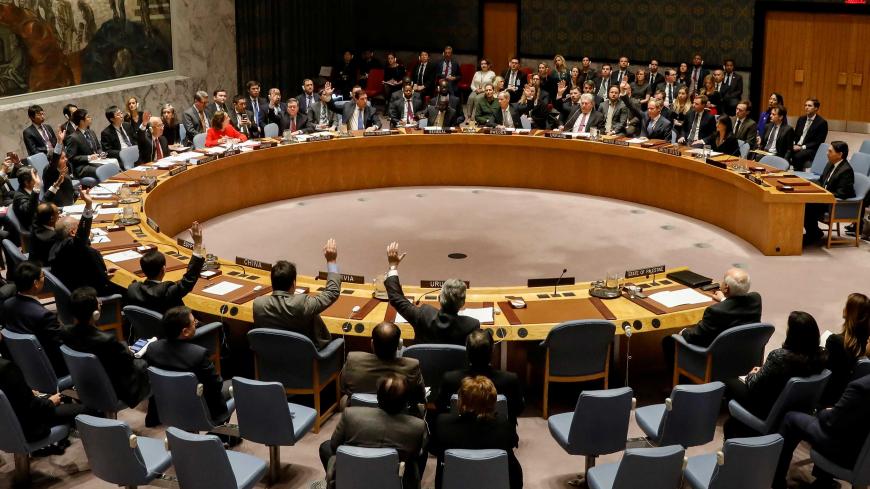 Egypt sponsored a UN Security Council resolution on Dec. 18 rejecting the proclamation made by President Donald Trump on Dec. 6 recognizing Jerusalem as the capital of Israel. The United States vetoed the measure. As a result, the Palestinians are now preparing for a full-scale diplomatic offensive. On Dec. 21, a similar vote will be brought before the UN General Assembly, where the United States has no veto power. More than 100 of the United Nations' 193 member states are likely to support the resolution, to be submitted by Turkey and Yemen.

The Israeli Ministry of Foreign Affairs has instructed Israeli representatives in the world's capitals to reduce the potential damage to Israel's image by waging a public diplomacy campaign against the upcoming resolution and by recruiting nations other than the United States to oppose it. Meanwhile, Palestinian President Mahmoud Abbas feels humiliated and hurt by Trump's decision.

Abbas has instructed senior Palestinian officials, as well as the Palestinian ambassador in Washington, Husam Zomlot, and his ambassador to the United Nations, Riyad Mansour, to act boldly and use every means at their disposal to ensure that the UN resolution passes. They are to do this even if the consequences include the closing of the Palestine Liberation Organization (PLO) mission in Washington, which Secretary of State Rex Tillerson threatened to do a month ago, or expedited congressional passage of the Taylor Force Act, which would dramatically cut American aid to the Palestinian Authority (PA) because of its support for the families of imprisoned Palestinians convicted of terrorism.

Abbas no longer has anything to lose. It is clear as day to him that the diplomatic activities that he is planning are more than a declaration of war against the State of Israel. He is also going up against the world's greatest superpower, the United States. As I wrote in Al-Monitor Dec. 18, the Trump declaration made clear to the Palestinians that there is no diplomatic solution mediated by the Americans on the horizon. As a result, most Palestinians want to see Abbas exit the political stage and hand his role over to someone who can lead them along a different path from the one Abbas has followed for the past few years. This path now appears to them to be naive and failing.

The Palestinians have been encouraged by the European states and every member of the Security Council (except the United States) who supported the Dec. 18 resolution to overturn Trump's declaration. They believe that even if the vote in the General Assembly is only of symbolic value, it would be a major victory for their image. With the backing of the international community, they would be able to lift their heads and follow a new path, without the involvement of Trump and the United States.

After the Americans vetoed the Security Council resolution, Abbas delivered a bellicose speech in Ramallah in which he declared, “We will [try] once again, and many times, to get full membership.” Abbas also said that the Palestinian leadership plans to submit applications to join 22 international organizations to which Palestinians have a right to full membership. Abbas' remarks were also in response to harsh comments by US Ambassador to the United Nations Nikki Haley. Haley said that if she could, she would counter the Barack Obama administration's abstention in the Security Council in December 2016 and veto UN Resolution 2334, which called the settlements an obstacle to peace.

Senior members of the Palestinian leadership received a direct message from Abbas that they were to treat the Trump administration as hostile and challenge its decisions in any and every international forum, whatever the cost. A senior Palestinian official told Al-Monitor that Abbas was deeply offended by the American administration, which said one thing to him but did another. Abbas feels that Trump's envoys, Jason Greenblatt and Jared Kushner, intentionally deceived him. According to the official, Abbas may be acting on his gut response, but he still has no choice but to fight the decision with every diplomatic means at his disposal, instead of “turning the other cheek.” He added that the support of the other 14 members of the Security Council encouraged the Palestinians and offered them a sense of hope in their struggle.

Hanan Ashrawi, a member of the PLO Executive Committee, praised the 14 nations for their support. She promised that the entire Palestinian leadership would respond with a single voice in the international arena, particularly at the United Nations, “to ensure that justice prevails and that these Israeli and American violations will not challenge the peace and stability of the world.”

If an overwhelming majority at the UN General Assembly rejects Trump's declaration, it would be interpreted by the Palestinian delegation as a sign of international support for the path that Abbas has chosen. Such a vote would demonstrate to the public back home that apart from Trump and the United States, the rest of the international community backs Abbas. Widespread support in the United Nations would also be a green light for the kinds of moves that Abbas has been planning for the next few weeks to request that the Palestinians be granted membership in various UN committees and international bodies, including full membership to the International Criminal Court (ICC).

When the Palestinians received observer status at the ICC three years ago, Israel imposed economic sanctions. Since then, Israel has pulled out its economic sanctions card every time Abbas has threatened to join UN committees or the ICC as a full member. Israel has a proven weapon against any diplomatic measures taken by Abbas. It can freeze the transfer of tariffs that it collects for the PA for business conducted by Palestinians with Israel and the rest of the world. This would make it impossible for the PA to pay the salaries of its employees and effectively bring about its economic collapse.

Abbas is determined to submit these requests right after the vote at the General Assembly. When he does, Prime Minister Benjamin Netanyahu, Education Minister Naftali Bennett and Defense Minister Avigdor Liberman will compete, for their own political reasons, over who can come up with the most creative and extreme sanctions against the PA, which could lead to Abbas' fall. On Dec. 15, Liberman boasted that the only reason Abbas remains in power is because he maintains security coordination with Israel and hinted that the Palestinian president would not dare abandon the arrangement, even if once again subjected to the kinds of sanctions that would strangle the PA.

Abbas is taking into consideration the same type of Israeli measures that he has experienced in the past. Given his current situation, this time it looks like he has no other choice but to take a fateful step.