PLO office closure threat could be last straw for Palestinians

Though it was reversed just a week later, the US decision to close the PLO office in Washington led to increased calls for the Palestinians to move ahead with more unilateral actions. 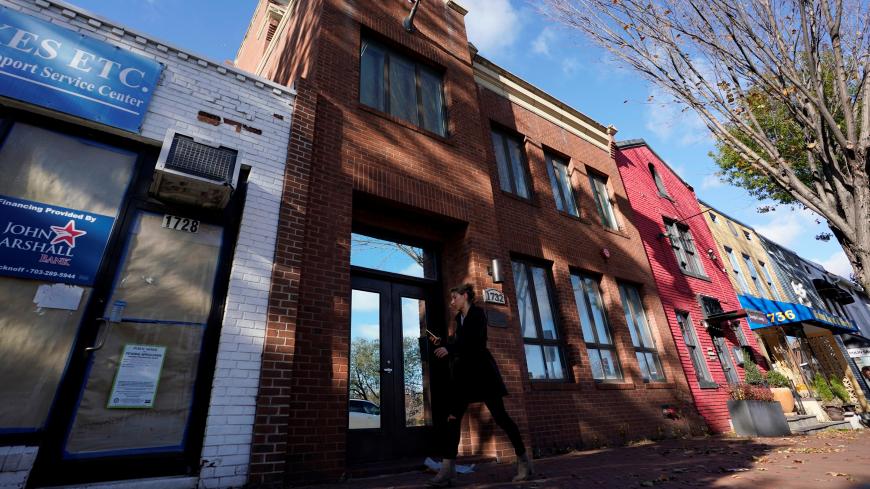 The US decision Nov. 17 to close the PLO office in Washington produced a rare instance of Palestinian unity. Palestinian officials, Palestinian-Americans and opposition activists are all in agreement that the US decision could help usher in a new path for Palestinians. All seem to agree that this could be a rare opportunity to break away from the current US attempts to dictate to Palestinians their strategy, actions and even words.

This unity helped the PLO reject any engagement with the US government and as a result the Trump administration on Nov. 24 reversed its decision and said it would allow the office to continue operations, albeit with some restrictions for the next 90 days.

Husam Zomlot, the Palestinian Authority (PA) ambassador to the United States and the head of the PLO mission in Washington, told Al-Monitor that the status of the Palestinian office cannot always remain under threat of closure. He said, “We can’t be bound by arbitrary decisions of the US legislature, whose decisions are based on pressure groups.” He added that some of these decisions “promote radical Israeli positions" and even "hurt US interests or the ability of the United States to act as a neutral partner for a comprehensive peace.”

Zomlot, who spoke to Al-Monitor by phone from the PLO’s Washington office on Wisconsin Avenue, said that the status of the office is based on a 1987 US law that had considered the PLO to be a terrorist organization. “Despite all the bilateral agreements and cooperation on multiple levels since, it is unacceptable that the status of our office continues like that and we must correct it,” Zomlot said.

Hanna Hanania, the president of the American Federation of Ramallah, agrees with Zomlot that Palestinians should refuse to go back to the status quo. Hanania told Al-Monitor by phone that if the US government does not back off completely, Palestinians should cut off the relationship. “Otherwise, if we allow this small problem to fly, there will be other things in the future,” he said.

Lara Friedman, the president of the Foundation for Middle East Peace, said the US Congress has continually slipped clauses into major laws over the years that have brought about the current legal debacle. She said former US President Ronald Reagan had considered the clause restricting the ability of the president in regard to foreign powers "to be unconstitutional"; Reagan argued on Dec. 22, 1987, that when it came to the issue of deciding on relations with the PLO, “the right to decide the kind of foreign relations, if any, the United States will maintain is encompassed by the President’s authority under the Constitution, including the express grant of authority … to receive ambassadors.”

US State Department spokesman Edgar Vasquez used similar language when explaining the reversal of the US decision regarding the PLO office, saying, "These actions are consistent with the president's authorities to conduct the foreign relations of the United States." US officials now say that the PLO office only faces certain restrictions for 90 days, and that those can be lifted if serious Israeli-Palestinian talks are underway.

On Nov. 21, three days before the reversal was announced, the Palestinians said they would freeze all contacts with the United States. President Mahmoud Abbas on Nov. 22 refused to take a phone call from Jared Kushner, President Donald Trump's son-in-law and Middle East adviser.

Hanania, a Palestinian-American dentist in northern Virginia, said the decision to close the PLO office is a reflection of a lack of communication within the administration, the administration's lack of experience and pressure from the pro-Israeli lobby and the State of Israel. "[Israeli Prime Minister Benjamin] Netanyahu has been publicly saying since September that Israel wants to close down the PLO office and it seems that he is getting his way,” Hanania said.

The Times of Israel reported Sept. 28 that Israel was actively pursuing a plan to get the Trump administration to close down the Palestinian mission in Washington.

Ali Abunimah, the co-founder of the Electronic Intifada, told Al-Monitor that it is not enough that Palestinians suspended ties with the United States. “This does not go far enough. [Mahmoud] Abbas should show he is serious by refusing any further payments of US aid money to the Palestinian Authority. This aid is after all given on condition, and for the purpose, of supporting PA collaboration with the Israeli military occupation.”

Abunimah, author of “The Battle for Justice in Palestine,” said the Nov. 17 US decision to close the PLO office is a perfect opportunity to accelerate the work of the International Criminal Court. “If it has to be either or, then pursuing justice for Palestinians murdered, maimed and expelled by Israel is of incalculably greater importance than the existence or not of a PLO office in Washington,” he said.

Hanania said that some people have argued that another reason for the Trump administration's Nov. 17 decision to close the PLO office might be the effectiveness of the Palestinian ambassador to Washington. “The activities and the effectiveness of the new ambassador are not making American Israel Public Affairs Committee happy. He is helping unite the Palestinian-American community and is doing things differently than what we have seen before.” Hanania said most of the negotiations are going through Zomlot because “he is known to have the trust of President Abbas.”

The Nov. 24 reversal decision will not be enough if it is just a temporary one with the US secretary of state and the president continuously wielding an ax over the Palestinians' heads. No diplomatic mission can operate and engage freely and independently if it has to constantly worry about the fate of its mission for every word that is spoken by its leadership.

By acting so rashly and overextending itself, the Trump administration, Israel and the pro-Israeli lobby may have inadvertently provided Palestinians with a unique opportunity to help themselves. It might have allowed Palestinians to put a stop to the current situation in which Palestinian diplomats and officials have to be constantly pleading for US favor and acting in ways to avoid angering the United States, Israel and the pro-Israeli lobby just to be able to go to their office every day.

The reversal is the right step if it is followed up in writing with clear reference to the immunity that diplomatic missions are guaranteed. Otherwise the past week’s emergency situation facing the ambassador and staff of the Palestinian mission will be repeated every time the United States is unhappy with what the Palestinian leadership says or acts on.