US, Israel isolated as UN votes in defiance of Trump on Jerusalem

The overwhelming vote at the UN General Assembly meeting against the US move on Jerusalem will not bring peace any closer, but it does restore a sense of integrity to the world body. 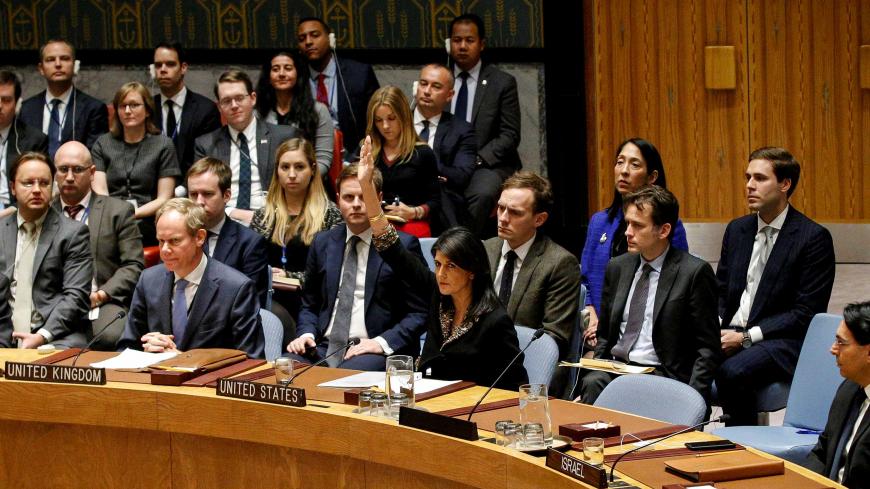 US Ambassador to the United Nations Nikki Haley vetos an Egyptian-drafted resolution regarding recent decisions concerning the status of Jerusalem during the United Nations Security Council meeting on the situation in the Middle East, including Palestine, at the UN headquarters in New York City, Dec. 18, 2017. - REUTERS/Brendan McDermid

Unlike all previous Arab-Israeli confrontations at the United Nations, this one was not about Israel. The world was given clear instructions by the sole superpower to accept its dictates even if they flaunt the resolutions of the world body, or suffer direct financial consequences.

The world didn’t flinch or back down under the threats of the powerful United States, but called the American bluff.

The UN General Assembly was holding an emergency meeting according to the UN charter’s Uniting for Peace clause, which allows for an appeal to the General Assembly when a veto decision is cast. The General Assembly voted overwhelmingly in favor of a resolution, 128-9 with 35 abstentions, submitted jointly by Yemen and Turkey on behalf of the Arab League and the Organization of Islamic Cooperation to declare the US move "null and void."

Speaking to the Saudi-based Arab News, the Palestinian ambassador to the UN, Riyad Mansour, called the vote impressive and stressed the resilience of the international community despite US pressures. “This vote was not against Israel; it was a vote against the US. I am happy with the result despite all the pressure that was placed on UN member states not to support this resolution.”

In the days leading up to the vote, both President Donald Trump and his envoy to the UN, Nikki Haley, threatened countries with financial punishment if they went against the United States.

Rashid Khalidi of Columbia University told Al-Monitor that the “latest display of childish pique when things do not go President Trump’s way provides an extraordinary spectacle.”

In an email exchange, Khalidi predicted even before the vote that countries that might have succumbed to the usual quiet American-Israeli pressure tactics may now be too embarrassed to do so.

Khalidi, an Edward Said professor of Arab studies, said that the United States has employed arm twisting, threats and pressure myriad times during its reign as the world’s leading superpower. “Such tactics, for instance, were deployed in 1947, when the UN adopted UNGA Resolution 181 known as the Partition Plan.”

PLO Executive Committee member Hanan Ashrawi said in a press statement after the vote that Trump should know that some things are not for sale or subject to blackmail. “Extortion is the most effective way for the US to isolate itself even further and to weaken its influence and standing globally,” she warned. Ashrawi noted that despite US efforts to safeguard Israel against its own violations and war crimes, the majority of members maintained their principled positions while a minimal few succumbed by abstaining or voting against the resolution.

“This further demonstrates the isolation of the US in its blind support of Israeli lawlessness and impunity. It is therefore called on to rescind its irresponsible and dangerous decision and refrain from joining Israel in its criminal behavior," Ashrawi concluded.

The results of the vote showed that Canada, which voted Dec. 19 against the Palestinian right of self-determination two days earlier, abstained from the vote on Jerusalem. Israeli writer Barak Ravid tweeted Dec. 21 about why Canada made a last-minute change. “Canada considered voting against the UNGA resolution on Trump's Jerusalem announcement but changed vote to abstention after hearing Trump's threats in order not to be perceived as US puppet, Western diplomats tell me,” he tweeted an hour before the actual vote.

In its daily press review Dec. 22, the Palestine News Network observed that the Israeli media noted that the UN vote was “difficult for Israel and its legitimacy, a defeat to [Benjamin] Netanyahu and a cause for shame to US President Donald Trump.”

Mahdi Abdul-Hadi, director of the Palestinian Academic Society for the Study of International Affairs, told Al-Monitor that despite the US threats and blackmail, Palestinians are seeing a majority of countries rejecting the US position. “Does this mean that the Trump administration will be ushering in a new chapter of international relations [to replace the one] that has been with us since the end of the second world war and the creation of the UN?”

While the majority of the discussion centered on the US threats, the decision at the extraordinary General Assembly meeting was also seen as a vote of confidence in the UN and for the preservation of the world order.

Speaking on CNN after the vote, Palestinian envoy to the United States Hussam Zumlot argued that the UN decision was about the credibility of the international organization. “This wasn’t a win for Palestine, it was a vote internationalism, for multilateralism, for international legality, for international system. Otherwise we would be in the rule of the jungle. … Today was a clear day that the world has voted for its own resolutions.”

While the vote was overwhelming in support of the resolution vetoed in the Security Council on Dec. 18, the atmosphere that has ensued has isolated the United States and Israel. This isolation comes just as Trump and Netanyahu face their own internal legal problems and appear to be running away from them by creating international distractions.

The vote at the UN will not bring peace any closer, nor will it do much to change the situation on the ground, but it does restore a sense of integrity to the world body while shaming a superpower that threatens poor people around the world with financial punishment if they don’t toe their line on how to practice their sovereign rights as independent countries.