Iraqi Kurdistan suffers from a devastated economy and increasing public anger in the aftermath of the independence referendum. 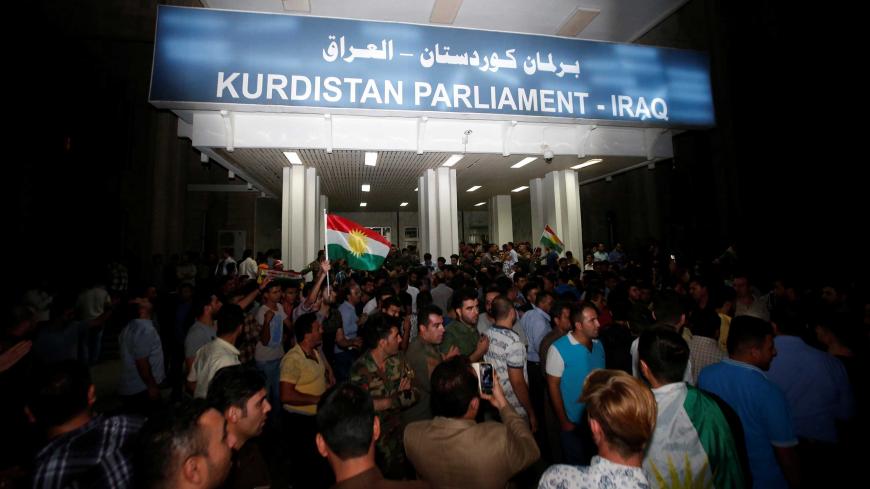 ERBIL, Iraqi Kurdistan — “A local minimarket like mine should have worked! If things are going this badly here, then how bad is it elsewhere?” said Badr Mahmoud, who just reopened his shop in Kurdistan's capital city of Erbil. It's smaller this time because of the lack of income, with fewer products and less stock than before. “I must figure out how to survive because the neighborhood and even the kids in the street need me.”

Mahmoud’s shop is one of over 300 that have closed over the past four months in Erbil — a third of the total. The closures reflect the decline that started with the costly battle against the Islamic State (IS) and accelerated with the fallout over the Kurdish referendum for independence in September.

“A month before the referendum, people started to spend less, as they did not know what was going to happen. The situation got even worse after it. Friends who rent shops closed before me. At least I don’t have to pay rent, as the place is mine.”

Before the flight ban imposed by Baghdad following the September referendum, Kurdistan was a popular destination for businessmen, aid workers and professionals who could fly in from Vienna, Frankfurt, London, Beirut, Istanbul, Tehran and Dubai. Now many stay away, either for lack of an Iraqi visa needed to travel through Baghdad or because they do not fancy the longer route overland through Turkey. Either way, the cost of traveling to Kurdistan has more than doubled.

All international freight now has to detour through Baghdad, adding time and cost. Travel by road between Erbil and the rest of Iraq is hampered, as main routes are blocked after military operations. In October, just miles from Erbil, Kurdish peshmerga troops engaged with the Iraqi army as they took back most of the disputed areas that the Kurds had secured in battles against IS. The longer routes are often less safe, adding loss to loss.

“The measures are supposedly intended to promote Iraqi unity, but how can you expect anyone to stay with someone who imposes such measures on you?” Mahmoud said.

Baghdad is even trying to limit the autonomous authority of the Kurdistan Region. Official documents of the Iraqi government now refer to the "three northern provinces," and most measures seem to derive from a wish to treat the Kurdistan Region as such — including the new regulation that Kurdish companies wanting to sell to central and southern Iraq have to secure a permit in Baghdad, chairman Dara Jalil of the Kurdish Chamber of Commerce told the Kurdish TV station NRT.

As trade is the Kurdistan Region’s main source of income, with many products originating from neighboring countries, the closure of some of the border posts on the Kurdistan-Iran border has also had an impact.

Other measures, like those making it more difficult for Kurdish banks to function, have added to the negative effect on the economy, which has led to most markets slowing down and the real estate business freezing up completely. Since negotiations between Erbil and Baghdad have not been successful so far, the economy has been brought to a halt.

The continued hardship led to three days of protests in December in a number of Kurdish towns in which government party buildings were set on fire, six protesters were killed, hundreds were arrested and security police clamped down to impose peace.

After the protests, Abadi promised to pay some of the salaries of Kurdish civil servants, pending validation of their employment. As for demands for negotiations, he repeated that Erbil has to commit first to the constitution and hand over all border posts to the Iraqi federal forces, as well as withdraw to the pre-2003 borders.

Abadi announced Dec. 27 that his government has started paying salaries to Kurdistan public servants. The first round includes salaries of water resources personnel, to be followed by salaries of employees of the education and health sectors. He accused Kurdistan authorities of providing fake employees lists, which required double checking and correction.

His political opponent, former Prime Minister Nouri al-Maliki, who cut the salary payments in 2014 over oil disputes with the Kurds, now said he supports paying employees in Kurdistan to restore stability there. “It is shameful to punish the Kurdish people in order to garner more votes during elections. Such an approach contradicts ethical, national and legal norms,” he said, calling for direct talks, even though many saw this as a move to spite Abadi. “The Kurds will return to being partners and brothers in this country,” Maliki predicted.

Although rumors abound that the airport ban will soon be lifted, well-informed Kurds doubt that. An adviser to the Kurdish prime minister’s office told Al-Monitor on condition of anonymity that he expects the problems to remain until the Iraqi elections in May, as Abadi needs his anti-Kurdish policy to keep ahead of his rivals.

As a result of the Baghdad measures, the Kurds have lost oil income and become dependent on Baghdad for their civil servants’ salaries, although these have yet to be paid. Mahmoud points out that “if the Kurdish government draws up a solid plan and implements policies on corruption and double salaries, they can fix a good many problems. Also, people from different parties are thinking about solutions. This is a terrible crisis, but it will not last forever.”