The Iraqi government’s austerity plan has now reached civil servants, raising fears of an uncertain future in light of the plunging oil revenues and increasing military expenses in the fight against the Islamic State. 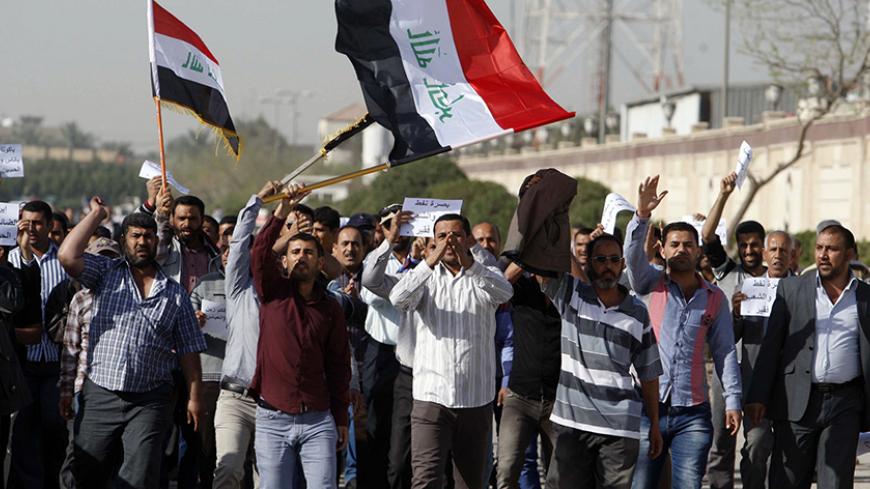 BAGHDAD — Plunging oil prices are now affecting ordinary civil servants’ salaries in Iraq. Al-Monitor met with an employee of the Ministry of Culture who, on condition of anonymity, shared his plan of submitting a request to take a one-year leave of absence without pay once he finds a job in the private sector to make up for the government salary. Rumors that civil servants may end up not being paid in the coming months are the result of a 3% reduction in their salaries as of January, which is helping fund the Popular Mobilization Units in their war against the Islamic State (IS).

In regard to the situation of Iraq’s civil servants, he said, “Cuts in civil servants’ salaries have caused discontent in the Iraqi street and resulted in some employees resigning, either to work abroad or in the private sector, because their salaries are not even enough to pay rent.”

The Iraqi economy — which depends on oil revenues to support state expenditures — is in shock; Iraqi Prime Minister Haider al-Abadi promised that the economic crisis would be absorbed through an austerity plan he announced in October 2014, which has now resulted in the public sector’s salaries being reduced by 3%.

On Dec. 16, parliament approved the 2016 draft budget, which is estimated at 105 trillion Iraqi dinars ($87.5 billion). However, $60 billion of the draft budget is needed to pay civil servants’ salaries in 2016, in addition to the cost of the war waged against IS, which the parliamentary finance committee estimated at $10 million a day, or $3.65 billion annually.

Iraqi civil servants’ fears about their income are primarily based on a statement by Finance Minister Hoshyar Zebari. He said Jan. 4, “The Iraqi government will not be able to allocate the employees’ payrolls for April 2016 in the case that oil prices continue to fall.”

To avoid this fate, a less painful solution seems to be on the table now. A source from the consultative committee at Abadi’s office told Al-Monitor, “Abadi delivered a message to the economic experts at the committee, asking them to study a proposal to reduce the salaries of state employees — except for the police, the army and security services — by 25%, similarly to what the Kurdistan Regional Government did [on Feb. 3].”

Yet a spokesman for Abadi’s office, Saad al-Hadithi, told Al-Monitor, “Abadi did not decide to reduce salaries by 25%. There are, however, several proposals, including furloughing civil servants for a specific period of time and cutting a small sum from their salaries. So far, no decision has been made on significant salary reductions.”

Hadithi said, “The government is working hard to pay the salaries of the employees as part of its commitment to its citizens. The [government’s] austerity measures are a part of its mechanism to preserve sustainability of the civil servants’ salaries.”

Najiba Najib, a member of the parliamentary economic committee, told Al-Monitor, “Reducing civil servants’ payrolls needs to be halted, particularly since a large percentage of Iraqis live on these salaries that are not in line with the high cost of living in the country in any way.”

She said the government must not reduce civil servants’ salaries and must work to pay them on time "because Iraq’s economic situation cannot tolerate an attack on the livelihood of its citizens.”

Maytham Elaibi, a finance professor at Al-Mustansiriya University in Baghdad, told Al-Monitor, “The proposed rate of a reduction in the civil servants’ salaries was 10%. It was deducted in two parts: first 3% and then 7%. The financial situation in the Iraqi provinces is more stable than that in the Kurdistan Region, partly because the Finance Ministry and the central bank are located in Baghdad, while such essentials of the state's strength are not available in Iraqi Kurdistan.”

Elaibi said the amount “that will be deducted will be considered a tax, similarly to other taxes paid by employees in other countries, and not a salary cut. Yet I believe it would be better that this rate is subject to the principle of progressivity, rather than being imposed at a fixed rate for all rungs of the career ladder — the imposition of a 12% rate for the top with the rate decreasing to 2%, for instance, for the 10th rung on the career ladder.”

Elaibi suggested that “deduction rates from the salaries be close in range and that the differences between one rung and another do not exceed a 1% deduction rate. For instance, it could be at a rate of 0.5%. A 7% rate can be, for instance, deducted from the salaries of civil servants of a particular rung, and a 6.5% rate for the rung following it. This will [help] bring about justice in the distribution of the financial burden and ease the burden on lower social classes.”

He added, “I do not think that the central government is unable to pay the salaries for 2016," saying it "can take measures that could contribute to the payment of salaries before it becomes unable to pay.”

Abadi’s government is facing serious challenges, most importantly securing the salaries of its civil servants and financing the war against IS, both of which are correlated with the deteriorating economic and security situation in the country in light of the ongoing dependence on oil revenues as the only source to finance the federal budget. All solutions seem temporary and inconclusive, at a time when there are signs indicating that the economic situation is collapsing and the poverty rate is rising due to the ongoing fall in global oil prices.