How to resolve Iraq's economic crisis

It's time for Iraq to look beyond stopgap measures and develop a larger plan to resolve the country's dire economic situation. 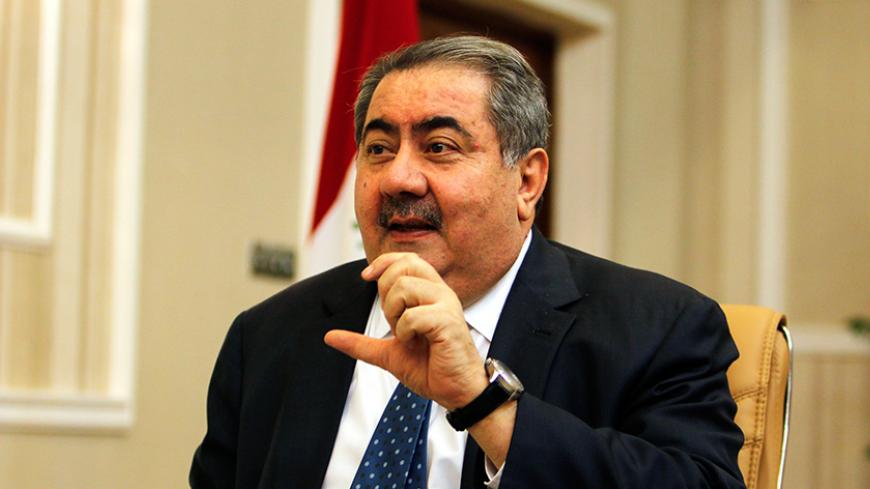 Iraq's Finance Minister Hoshiyar Zebari speaks during an interview with Reuters regarding Iraq's consideration of an international issuance of $5 billion worth of five-year, dollar-denominated bonds to cover its budget deficit, in Baghdad, March 18, 2015.

The Iraqi government faces a huge budget deficit and is having difficulty running the country’s economic activities because of plummeting oil prices, the heavy burden of the war against the Islamic State and rampant corruption.

Prime Minister Haider al-Abadi faces numerous problems that require immediate attention, such as the public's anger over austerity measures that hurt ordinary workers. Iraqis are also demanding that the government improve its performance and bring corrupt officials to justice.

The estimated 2016 budget is as unrealistic as the 2015 budget. A major part of its funding relies on fluctuating oil revenues, which are expected to reach $55 billion in a best-case scenario. Non-oil revenues are not expected to exceed 10% of Iraq's total income, based on past years. In some periods from 1921 to 2012, non-oil revenues in Iraq did not even exceed 5% of total income.

Abadi clarified the situation in an Oct. 27 meeting with Iraqi university professors, saying, “Oil revenues are nearing 59 trillion dinars [$53.05 billion]. Deducting the cost of oil production, the remaining amount will be 45 trillion dinars [$40.3 billion]. Salaries and pensions alone require 50 trillion dinars [$44.8 billion]. How will the expenses of war, health, education, agriculture, services, the poor and others be covered?”

Haitham al-Jubouri, a member of the parliament’s finance committee, said Sept. 15 that the 2016 budget will cover only the bare necessities, with no room for extraneous expenditures or investments.

Finance Minister Hoshyar Zebari announced Oct. 21 that Iraq might borrow from international and Arab banks to make up part of next year’s budget deficit. However, he did not disclose any details about a potential loan or how Iraq would cover payments with no prospects for higher oil prices in the near future.

The most worrisome aspect of Iraq's deteriorating economic situation is that the government does not have a strategy to deal with this crisis. It has taken only temporary steps such as borrowing from foreign institutions or cutting salaries, both of which have exacerbated the problem.

The government must take major steps to resolve the crisis. Possibilities could include diversifying Iraq's income sources, activating the private sector, privatizing the public sector and implementing effective programs to combat rampant corruption.

The government needs to focus more on non-oil income sources, such as religious tourism. Millions of Shiites from Iran, India, Pakistan, the Gulf states and other countries visit Shiite shrines in Iraq. Last year, more than 1 million pilgrims came from Iran alone to Iraq for the Arbaeen pilgrimage. But in 2014 and 2015, the government waived the usual visa fees of $80 per person, leading to a significant financial loss when the country already faced a budget deficit and serious economic deterioration. Based on that experience, the parliamentary tourism committee demanded Oct. 31 that the government reinstate the visa fees for 2016.

Another step the government ought to take is to facilitate private investment in the tourism sector. In addition to religious tourism, there are ancient archaeological sites that could generate income by attracting foreign tourists interested in the country's historical significance. Many of the sites are located in southern Iraq, which is relatively safe.

There is a general demand in Iraq for ​​activating the private sector and privatizing industrial projects. Ahmed Safi, spokesman for Grand Ayatollah Ali Sistani, expressed the religious authority's wishes Sept. 18 in Najaf, saying, “The state needs to reduce the burden placed upon itself to take care of the private sector," while reducing laws that restrict private sector efforts and passing legislation that facilitates such investment.

Privatization would allow the government to oversee economic activity and end the rampant corruption. The government also needs to adhere to the guidelines of international integrity and anti-corruption institutions such as the Global Financial Integrity.

The only way out of the current crisis is for the government to look beyond stopgap measures and instead develop large-scale economic plans the general population can contribute to and benefit from.