The parliament is studying Iraq’s controversial 2017 budget this week, with the main challenges coming from a significant deficit and disagreements over allocations. 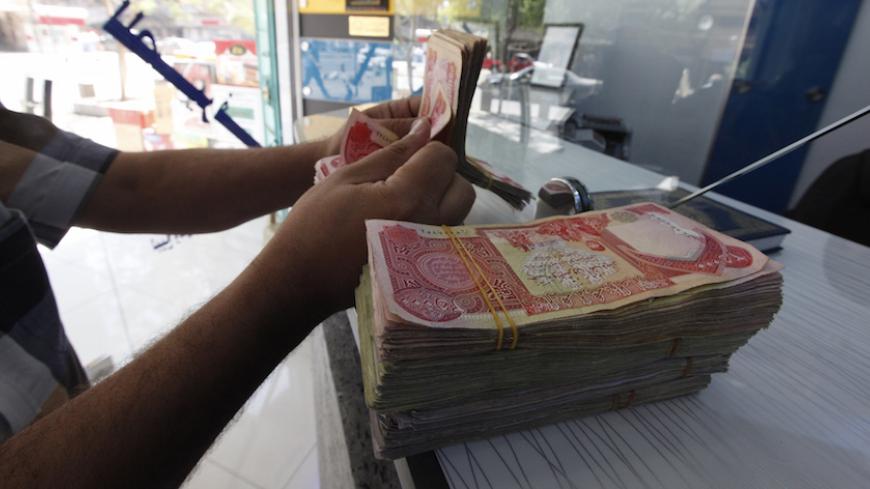 BAGHDAD — Iraq's parliament will meet Dec. 1 to continue hashing out a draft of the 2017 general budget, which currently includes a deficit that will require the country to seek out non-oil income, attract investments and eliminate alleged corruption.

So far, the draft law pegs the budget at 102 trillion dinars (about $85 billion) with a projected deficit of $26.6 billion.

The country's finances have been hammered by low oil prices, the war against the Islamic State (IS) and, according to a citizens group, significant government waste. Much of its budget will depend on the price of oil. Iraq received good news today when OPEC agreed to cap oil production. After two years of prices that sometimes dropped below $50 per barrel, OPEC now expects that figure to reach $55-$60, the Wall Street Journal reported. OPEC has not always followed through on its promises, however.

Parliament is trying to resolve disputes over a number of items, including the budget for the Popular Mobilization Units (PMU). The legislature voted Nov. 26 to make the Iran-backed PMU into an official government military force. Shiite parliament members supported the move, but the Sunni minority boycotted the vote.

On Aug. 31, the proposed budget was amended to increase the PMU’s allocations, which had amounted to about 6 trillion dinars ($5 billion) in 2016, but the PMU leadership said that was not enough to cover all necessities. Najiba Najib, a member of parliament’s Economics and Investment Committee, criticized the PMU on July 12, telling the media, “Allocating 25% of the state budget to the army and the PMU overburdens the budget and adversely affects the economy.”

Other proposed allocations also are controversial. The Finance Committee examined the budget in October and concluded it did not adequately address development and service projects. Members proposed revising the budget to address citizens’ needs by providing support for low-income workers, creating jobs and stimulating investment, but such changes have not been made.

Although the budget allocates $20 billion for investment projects, it halts investments in ministries except for the Interior, Defense, Health and Education ministries. The cost of the war on terrorism is responsible for a large part of the deficit, as 12 trillion dinars ($10 billion) were allocated to the Ministry of Defense.

The drop in oil prices forces the budget to depend on loans to cover the salaries of employees and retirees as well as to compensate the families of those who were killed in the fight against IS, in addition to covering the costs of fighting terrorism and providing farmers’ entitlements. Jamal Koojerthe, a member of the Oil and Power Committee, has warned that unless parliament is cautious, the country could go bankrupt next year if oil prices continue to drop.

This economic bump in the budget was noted by Ahmed Kanani, head of the Economics and Investment Committee, when he told Al-Monitor, “Oil prices have thwarted a lot of projects and plans included in the 2017 budget.”

Kanani added, “The deficit caused by the lack of non-oil revenues and the costs of the ongoing war against IS since 2014 forced important ministries, such as the Ministry of Defense, to rely on the allocations [taken from] less important ministries to cover the cost of its projects.”

Hussein Thaghab, a researcher, correspondent and head of the economics department at Iraqi Al-Sabah newspaper, told Al-Monitor, “An economic recovery in light of the financial hardship suffered by Iraq as a result of the drop in oil prices in global markets seems impossible."

According to Thaghab, the solution lies in “creating an environment that can attract global investments with a lot of capital and advanced technologies. Global corporations are aware of Iraq's economic capabilities and plentiful natural resources."

He added, "The country is deemed rich, and this is one of the most important elements that guarantee the rights of international companies, especially as the volume of work in Iraq is very large and accommodates a lot of specialized and internationally classified companies." Because of that, Thaghab believes “Iraq is capable of gradually achieving economic development," especially if it paves the way for investment projects in the industrial, agricultural and tourism sectors, which will "pump billions of dollars into the federal budget.”

Mazhar Mohammed Saleh, financial adviser to the prime minister, confirmed Nov. 3 to the media that the 2017 budget is in line with International Monetary Fund requests to develop non-oil resources and other sources of income.

The new budget is also expected to reduce expenses through a project that in some ways resembles a pension or severance pay incentive. Under the program, public employees who have worked at least five years in their jobs can take paid "leave" for five years, but there is no guarantee that their jobs will still be there for them after that period.

Other measures are also expected. These include reducing the number of cars allocated for officials, reducing by 25% the staff of 4.5 million public employees, closing consulates and merging all of the trade, military, cultural and diplomatic missions with embassies. These measures are aimed at containing criticism of unnecessary spending. The Citizen Alliance lashed out Nov. 14 at the House of Representatives for the proposed allocation of 50 billion dinars ($42 million) to the president's office and 39 billion dinars ($33 million) for a plan to collect illegal weapons from civilians.

Najib told Al-Monitor the solution lies in “developing public and private sectors, enacting laws that can attract local and international private companies, cutting unnecessary expenditures, adopting a tax policy that encourages investment, and stimulating domestic products so they are up to the level of imported goods.”

A main consideration is safeguarding Iraq's money and directing the budget toward the goal of getting rid of financial and administrative corruption. About $361 billion went missing from Iraqi budgets between 2004 and 2014, which led the Iraqi government in 2016 to sign a memorandum of understanding with the United Nations to investigate financial corruption.