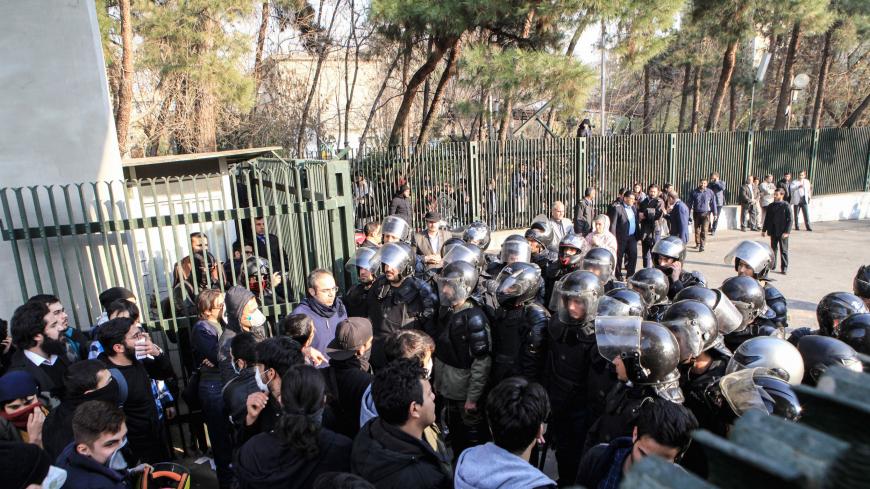 On the fourth day into the protests in Iran, key questions remain unanswered, although some emerging trends are providing important clues as to what might come next.

Having first begun in the northeastern city of Mashhad, the protests have now spread to most Iranian cities. However, major urban centers such as Tehran and Tabriz have not yet seen major demonstrations such as those that took place in the aftermath of the disputed 2009 presidential elections. Thus, in terms of geography, the trend is one of decentralized, provincial protests. Moreover, the actual number of protesters appears limited, though their impact should not be underestimated. For instance, violence, which included the burning of a police vehicle, was reported in the central city of Kashan; still, one account put the number of protesters there on Dec. 30 at merely a few hundred. However, while smaller groups of protesters may not constitute a critical mass, they could nonetheless prove difficult for the authorities to confront.

It is also becoming clear that the key mode of mobilization is the popular smartphone app Telegram, which has some 40 million users in Iran. Al-Monitor has previously closely covered the popularity of Telegram, how the authorities have sought to control its spread and how it has changed Iranian media. In April, the Supreme Council of Cyberspace in Iran required administrators of channels with more than 5,000 followers to register with the Ministry of Culture and Islamic Guidance. The move followed crackdowns on administrators of Reformist channels ahead of the May 2017 presidential elections. President Hassan Rouhani, allied with the Reformist camp, easily won a second term in those elections.

Amad News, a channel on Telegram, appears to have played a pivotal role in the wave of protests. Reportedly administered by exiled journalist Rohollah Zam — a son of a senior Reformist cleric said to have escaped the country after being accused of having links with foreign intelligence agencies — the channel had just under a million followers on the eve of the protests. This number ballooned before Minister of Information Technology and Communications Mohammad Jahromi on Dec. 30 successfully requested that Telegram founder Pavel Durov shut down Amad News on account of its reported incitement of violence. Remarkably, the Iranian request was made publicly on Twitter, a medium that remains filtered in the country. Mirror channels that emerged following the shutdown of Amad News also were closed, though one mirror site was functioning and had close to 900,000 followers as of this writing. In addition, the Iranian authorities have apparently moved to restrict mobile data services in some areas, although broadband appears to be functioning. Moreover, Telegram and Instagram, which have both been unfiltered in Iran thus far, are said to have been “temporarily” filtered in some regions.

While the method of mobilization is becoming clear, it is still unknown who, if any person or group, is leading the protests. The absence of a discernible leader has left the authorities unable to point the finger, such as in 2009, beyond the usual accusations blaming foreign intelligence services and hostile states. The speed of the geographical spread of the protests along with the apparent lack of a leader has, according to some accounts, even left some protesters puzzled, let alone most political observers. This could provide an opportunity for a variety of groups to hijack the protests.

Moreover, protester demands do not appear unitary. Chants and slogans vary from criticism of “high prices” to an outright end to the Islamic Republic. To gain a greater grasp of the situation, one important question to consider is that of who precisely is protesting.

Iran’s demography is changing: In 2013, the median age of the Iranian voter was 38 — three years older than in 2009. The aging of the Iranian population is clearly shifting public demands and has so far resulted in more pragmatism and emphasis on economic issues — a transition that Rouhani successfully picked up on in both his first election in 2013 and his re-election in 2017. Yet the administration remains mired in the challenge posed by the necessity of creating up to 1 million jobs each year simply to keep the unemployment rate from rising. As such, despite strong economic growth projected this year and for the rest of the Rouhani presidency, institutions such as the International Monetary Fund project unemployment to hover around 12% into the early 2020s. This figure is much higher among young people and women.

Eyewitness accounts as well as videos suggest that the demonstrators are overwhelmingly young. One unnamed Tehran-based social scientist told Iranian journalist Borzou Daragahi, “This is the new generation that has taken the streets this time. The '90s generation! A generation who doesn't recognize any limits. A generation who has no candidate in the race!" The social scientist added, “There is no space for appeasement in the current demonstrations, no signal to [Reformist ex-President Mohammad] Khatami, nor to [Mir Hossein] Mousavi. … What are these people looking for? There is no resemblance to the events of 2009.” Mousavi, a Reformist who protested his 2009 presidential election defeat to Mahmoud Ahmadinejad, remains under house arrest.

Indeed, the absence of specific Reformist demands such as the release of Mousavi suggests that the protesters have either become more radicalized in their demands and/or simply do not belong to the generation that experienced the events of 2009 as adults and subsequently turned more pragmatic — as seen in the high voter participation in both 2013 and 2017 that followed the widespread claims of vote fraud following the 2009 elections. While the prospect that a new generation of Iranians has lost belief in the political establishment’s ability to at the very least channel their grievances is a wake-up call for the Reformist camp, and perhaps a new and unique challenge for the authorities, it also means that there is a wide and perhaps growing disconnect with political elites.

In other words, the protesters may not have a horse in the race for the leadership of the Islamic Republic or allies willing to become associated with their still-oblique cause. One important indication of the latter is the reaction of popular voices such as pro-reform academic and analyst Sadegh Zibakalam, who took to Twitter to write that the century-long movement for democracy in Iran has faltered on many an occasion due to radicals, arguing that it has long been “one step forward, ultimately two steps back.”

In his first public reaction since the emergence of the protests, aired on state television late Dec. 30, Rouhani said, “Based on the constitution and citizens’ rights, people are entirely free to express criticism and even their protest." He added that "the form of criticism and protest should be such that the outcome leads to the improvement of the condition of the country and the lives of the people.”

The president has a unique opportunity to lead the way and transform a great challenge into a great opportunity.

First, his administration must act on its promises to provide outlets for the expression of grievances. There has been an increase in acceptance of differences of opinion in the discourse of the Islamic Republic, as seen in Rouhani’s emphasis on his Citizens’ Rights Charter and Supreme Leader Ayatollah Ali Khamenei’s public recognition that there are Iranians who do not support the Islamic Republic (and even urging these constituencies to take part in elections). One important and tangible move would be to engage with other centers of power, including the judiciary and the security services, to realize promises to license peaceful protests. Even conservative voices such as the spokesman of the parliament’s national security and foreign policy commission have urged the latter. It would be an astounding achievement for Rouhani to sow the seeds to produce what prominent member of parliament Ali Motahari has noted is lacking in Iran: namely, a “culture of protest.”

Second, Rouhani should address the genuine economic grievances — which also have to do with increased expectations stemming from his own promises — by addressing concerns about the impact of the neoliberal aspects of his proposed budget bill. The latter includes reconsiderations of the schedule of subsidy cuts and to also open the door to new modes of wealth transfer.

Last but certainly not least, rather than allowing the protests to become a tool for his domestic opponents and an opportunity for radicals to reassert their relevance, Rouhani must engage with the supreme leader to convince him of the need to tackle unaccountable centers of power and money. The president fired an important salvo in this game when he published details of budget allocations and through his recent revelations about the undue influence of opaque actors on financial markets. In the view of some, that very salvo is what helped mobilize the current protests. But in the long run, if the opportunity before him is seized, Rouhani could have in his hands his perhaps greatest chance to confront the vested interests that are preventing his agenda for reform.

Correction: Jan. 2, 2018. An earlier version of this article misstated the name of the exiled journalist who reportedly administers the Amad News Telegram channel. He is Rohollah Zam, not Mohammad Zam.