Will Tehran be able to withstand 'long overdue' quake?

The recent earthquake in western Iran renews talk of how prepared Tehran is for a big quake, which experts say is long overdue. 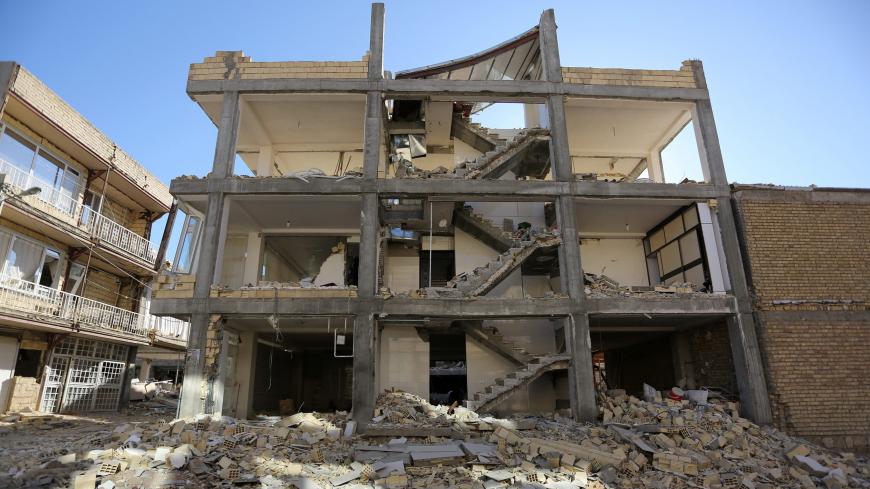 On Nov. 14, Tehran City Council Chairman Mohsen Hashemi stated at a council meeting that the Iranian capital is expecting a massive earthquake in the near future, adding, “According to the experts, Tehran experiences an earthquake of magnitude 7.0 every 150 years. Currently, it has been 35 years since the last due date for another earthquake.”

Of note, the capital was as recently as Dec. 20 rocked by a 5.2 magnitude quake with its epicenter in the nearby city of Karaj. According to a recent study carried out by the Seismology and Engineering Risk Department at the Research Center of the Ministry of Transportation, Housing and Urban Development, if an earthquake does strike Tehran, anywhere between 200,000 and 300,000 buildings will be destroyed and more than 1 million people will lose their lives. Tehran currently has a population of more than 13 million.

On Nov. 7, in an interview with Shahrvand Daily, Ali Beitollahi, the head of the abovementioned research center, stated that Tehran is one of the world's top five cities at risk of an earthquake, “There are a lot of fault lines in Tehran; there are in total about 30 fault lines from north to the south. … Therefore, if there is an earthquake, it will be massive.”

“I climb the fountain again. The street looks like a dining table whose tablecloth has been dragged. People are scattered around and beating themselves. … I look at the most beautiful street in Tehran for the last time. Perhaps I will never see it this beautiful again.” This is a quote from the novel “Don’t Worry” written by Iranian author Mahsa Mohebali. The novel begins with an earthquake in Tehran and follows 24 hours in the life of a young woman named Shadee, who is an addict. Shadee has run out of drugs and left her house in search of the next fix. Tehran continues to shake in the aftermath of the earthquake as Shadee tells of what is happening in the streets, the chaos, people behaving abnormally, violence and fear in the city.

The 2008 novel has won two independent literary awards in Iran and was printed as an eighth edition in only two years. In February 2009, in an interview with BBC Persian, the author of the book talked about her reasons for deciding to portray the Iranian capital in the aftermath of an earthquake, saying, “I think Tehran is constantly about to explode. It is like an overflowing bowl of hot soup. Now imagine there is an earthquake in this city. When a low magnitude earthquake struck Tehran following the earthquake in Bam, many people left their homes and spent the night in the parks. A lot of people started behaving abnormally.”

During the past few years, numerous Iranian officials and experts have warned that the capital is not equipped to face an earthquake. On Feb. 22 this year, Amir Mohsen Ziaie, the head of the Iranian Red Crescent Society, talked about Tehran’s inability to face an earthquake in an interview with Jam-e-Jam Online, saying, “Neither the citizens nor the officials are paying any attention to this issue and don’t understand that we are in fact sitting on a time bomb.”

On May 1, Esmail Najar, the head of Iran’s Crisis Management Organization, spoke about the same issue in a special meeting arranged by the organization’s coordinating council, saying, “An earthquake in Tehran will undermine national security.” Nonstandard buildings and worn-out urban structures are among the reasons why any possible earthquake in Tehran will have very destructive consequences.

According to Beitollahi, one-fifth of the buildings in Tehran are located in the worn-out urban zone, which has narrow passages, old buildings and unreachable areas. He talked about this issue in an interview with the semi-official ISNA news agency on Dec. 12, saying, “High-rises have been built next to roads that are 6-8 meters [roughly 20-26 feet] wide, and it is hard to even imagine what the rescue operations in these areas would be like if Tehran is ever hit by an earthquake. Therefore, the number of secondary victims of a possible earthquake in Tehran can rise dramatically.” The Tehran municipality, which is one of the legal organizations monitoring urban construction in Tehran, is also the organization in charge of managing the aftermath of any possible earthquake in the city.

On Nov. 23, in an interview on Iranian state television, Tehran Mayor Mohammad Ali Najafi said, “The crisis management system of Tehran is in some ways efficient and we should not worry about it … an earthquake is a natural event and we should not be afraid of it. We should instead try to reduce the risks associated with such an incident as much as possible.”

On Oct. 25, the head of the Center for Prevention and Crisis Management of Tehran’s municipality, Ahmad Sadeghi, talked about the process of renovating Tehran’s worn-out urban structure in an interview with Fars News Agency, saying, “If we go forward with this pace, we need at least 100 more years to renovate Tehran and make it strong enough to resist a possible earthquake.”

According to research conducted more than two decades ago by the Japan International Cooperation Agency, Tehran's fault lines can produce earthquakes of magnitude 7.0. Ebrahim Akasheh, a former university professor who is known as Iran’s father of geophysics and seismology, discussed this research during an interview with ISNA on Jan. 24, saying, “Back when this research was conducted, some of Tehran’s fault lines were identified. Today, due to further research done in this field, even more fault lines are recognized. The energy that will be released by these fault lines is enough to create, in my opinion, a great deal of human casualties. According to the data available from this research, it will be impossible to save Tehran if such an earthquake occurs. This reality should not frighten us; it should instead motivate us to take necessary measures to reduce the city’s vulnerability to earthquakes.”