A recent series of small quakes near Tehran revives fears of the consequences of a major tremor striking the Iranian capital. 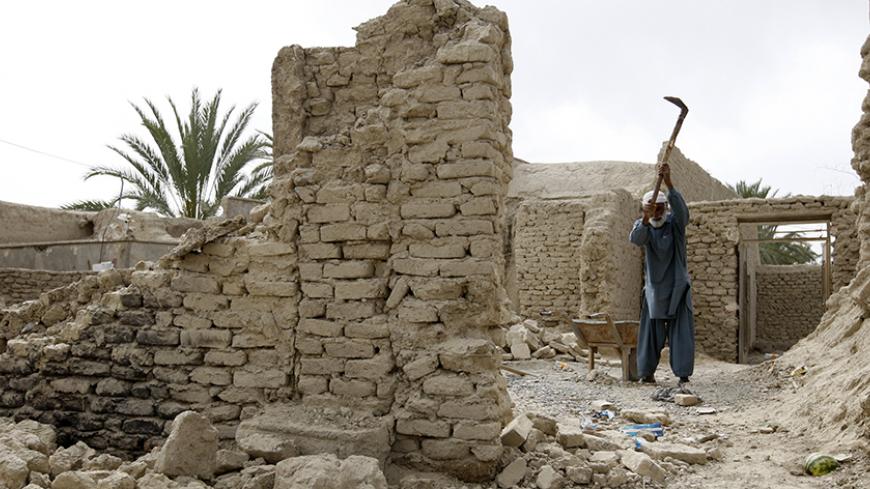 A man works at his house after an earthquake in Saravan, southeast of Tehran, April 18, 2013. - REUTERS/Raheb Homavandi

A correspondent in Tehran
September 3, 2015

TEHRAN, Iran — The recent series of earthquakes near the Iranian capital have reignited worries about whether this metropolis will be able to withstand a powerful tremor. Meanwhile, measures taken by the government and Tehran municipality to avert high casualties in case of a major quake are once again coming under scrutiny.

On Aug. 25, the official IRNA news agency reported that a medium-strength earthquake had struck near Tehran. With a reported magnitude of 4.6 on the Richter scale, its epicenter was the towns of Damavand and Firoozkooh located east of Tehran.

Separately, on Aug. 13, two earthquakes measuring 4.1 and 3.4 on the Richter scale struck Javadabad, a district of Varamin located just southeast of Tehran.

Immediately after the tremors in Javadabad, the head of the Relief and Rescue Organization at Iran’s Red Crescent Society, Naser Charkhsaz, announced an orange-level alert for Tehran province. Charkhsaz said, “The Geophysics Institute at the University of Tehran has announced that the faults in Tehran and Semnan [a city located 216 kilometers, or 134 miles, east of Tehran] have been activated.”

The orange-level alert was lowered to yellow 24 hours later. “This means people can now relax and there is no need to worry anymore,” said Charkhsaz.

Leading geophysicists and seismologists, including Bahram Akasheh — considered the father of seismology in Iran — beg to differ. They think there is a significant possibility that the recent tremors may have activated the major faults under Tehran. Following the Javadabad tremor, Akasheh said, “These earthquakes show that one of the fault lines is activated and the rest are ready to be activated.” Akasheh, who is a lecturer at the University of Tehran, added, “There are many faults running under Tehran, and it’s important to note that not only the ones in Javadabad region, but those in all of Tehran have been affected by the force and stress [of the recent series of small quakes].”

Tehran has been Iran’s capital since the late 1700s and has a metropolitan population of about 12 million. Prominent urban sociologist Azam Khatam told Al-Monitor it is very prone to quakes. “It has six main faults and several secondary faults. This means you are either on a fault or a few meters from one wherever you are in Tehran,” said Khatam.

What worries experts more than anything is the large number of dilapidated buildings in the city, which could cause a high number of human casualties if a strong earthquake strikes. Khatam told Al-Monitor, “In a country where only a few cities and regions are safe from earthquakes, vulnerability is a function of strength. Thus, instead of focusing on [seismicity] of the land, the structure of buildings must be the main concern.”

In January, Mehdi Hashemi, chairman of the Iranian parliament’s Urban Development Commission, stated that roughly one-quarter of Tehran is run down. Hashemi said, “More than 25% of the fabric of metropolitan Tehran is worn out, and most of this is located in the center of the city.” Hashemi said the dangers of an earthquake are serious, and he asked that thoughtful attention be paid to renovating the old parts of Tehran.

Mohammad Bagher Ghalibaf, who has served as mayor of the Iranian capital since 2005, also voiced serious concerns last May. He said, “Seismicity in Tehran is one of the threats facing this city. We should use the experiences of the international community to improve our situation.” Ghalibaf, who has a lot of experience in the armed forces and police, insists that great steps have been taken to reduce the number of potential quake casualties. “Preventive education and teaching people about the measures that need to be taken before an earthquake strikes are among these measures,” stated Ghalibaf.

In an interview with Al-Monitor, however, a lecturer at the University of Tehran’s School of Urban Planning who spoke on the condition of anonymity described Ghalibaf’s measures as very weak. “Tehran municipality has acted very poorly on issues such as the renovation of old areas. Of course, this comes as no surprise since the municipality’s main concern is to sell permits to high-rise builders and increase the number of construction projects in north Tehran.”

Last December, Abdollah Fathizadeh, director of the Renovation Organization of Tehran, announced that in the past 10 years — meaning since Ghalibaf took office — only 30% of the city’s old sections have been renovated. Of these areas, 70% are located in the southern half of Tehran, with District 15 facing the greatest challenge. One neighborhood in this district where the abundance of old buildings is apparent from a simple stroll in the streets is Shoush. Mohammad Reza, 70, a retired teacher here who now runs a small store on Shah Teimouri Street, told Al-Monitor that his brick home was built in 1951. "We have received no offers of renovation until now. No one will give us a loan either, and I have no money to do it myself. Believe me, we felt the Javadabad earthquake here. My wife and I were so afraid that we couldn’t sleep all night. We just pray that the Tehran earthquake never comes because with our old house, the first ones to go will be me and my wife,” said Reza.

According to Mehr News Agency, one of the most dangerous faults in Tehran is the Shahr Rey fault line, which runs through the city’s southern districts.

A principal at a public high school in District 15’s north Afsarieh neighborhood, who asked to remain anonymous, told Al-Monitor that he is very worried about the possibility of an earthquake. “This school was built in 1981 and has never been renovated. We have repeatedly written letters to the district municipality and the Ministry of Education, asking them to do something. But we have never received a response. Three-hundred students are studying here. Once a year, we hold earthquake drills. But what’s the use? With a 6 Richter scale quake, all these kids will be under the rubble.”

Some officials say many will drown in sewage or perish in huge fires if a quake strikes. Needless to say, the potential death toll is estimated to be very high. On May 4, Ali Beitollahi, head of the engineering, seismology and risk department at the Ministry of Roads and Urban Development’s Research Center, told reporters, “If an earthquake strikes Tehran, more than 1 million people will lose their lives.”

It appears that neither the government nor the municipality have effective short- or even medium-term plans to mitigate the devastation of a potential quake. Instead, things seem to be left to fate. In the words of the lecturer at the University of Tehran’s School of Urban Planning, “There is a proverb that says death is for thy neighbor. This seems to be Tehran municipality’s view too, which is why preparing the city for a possible earthquake is at the end of its list of priorities."