Unsure of who is behind the protests, Iranian political figures and factions voice support for the economic grievances of the protesters. 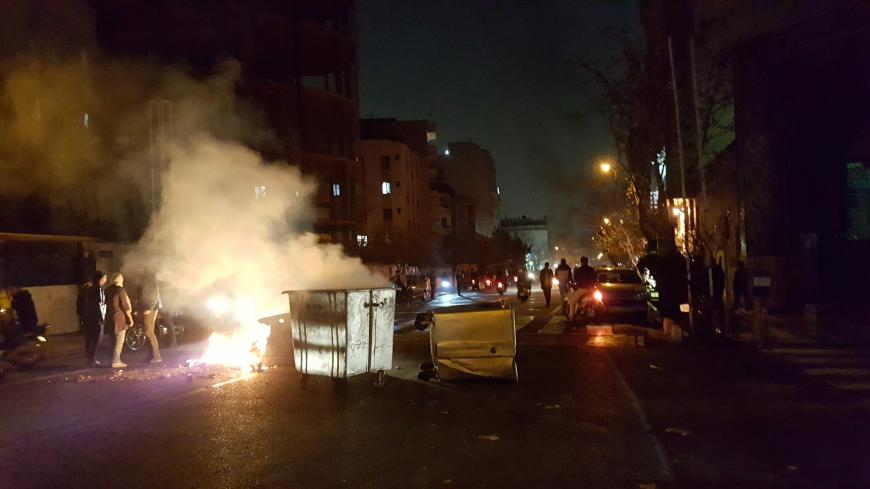 As Iran was rocked by a fourth day of protests, officials responded ambiguously by attempting to both co-opt the economic grievances of the demonstrators and promising to confront those who cause damage to property.

President Hassan Rouhani finally addressed the protests during a Cabinet meeting. He conceded that Iranians were right in their protests against not only the economy but also on corruption and transparency. However, he said the administration would not tolerate rioting or destruction of property. Rouhani also dismissed US President Donald Trump’s statements in support of the protests, saying that months ago Trump had referred to Iran as a “terrorist nation.” Rouhani also thanked the officials and security forces who did not confront protesters with violence and who showed restraint. Rouhani said that people should have a space to voice their criticism in the media.

Some of the most interesting comments have been made by conservative officials and pundits who have all previously condemned protests, especially the 2009 Green Movement protests. Ahmad Tavakoli, a former parliamentarian and member of the Expediency Council, called the street protests “predictable” due to the administration’s economic policies. He compared the policies to those of Ayatollah Ali Akbar Hashemi Rafsanjani's presidency in the 1990s; Tavakoli called them “harsh policies,” presumably referring to neoliberal economic measures to cut subsidies.

Addressing the protests that started in Mashhad, former hard-line parliament member Hamid Rasaei accused media linked to Rouhani of censoring those who are “protesting the current situation.” Mehdi Mohammadi, the former adviser to Saeed Jalili, a former nuclear negotiator under President Mahmoud Ahmadinejad, wrote that “protesting against economic difficulties is the right of the people.” Conservative analyst Vahid Yaminpour tweeted, “It has been reported that the president has called an emergency meeting. I hope that before the security and intelligence ministers give their reports on how to quiet the protesters, the economic ministers will think about how to improve the current situation.”

A videotaped message was scheduled to air later on Dec. 31 in which Rouhani was expected to address the protests.

Earlier, Rouhani’s vice president, Eshaq Jahangiri, alluded to his conservative foes' having sparked the protests in Mashhad. “Those who took actions against the administration should know that the smoke from their actions will go into their own eyes,” he said. “When street movements are begun, others will ride it, and those who started it will not end it.” More independent-minded conservative analysts have also had a similar analysis. Amir Mohebian told Tasnim News Agency that in Mashhad, the administration’s rivals were involved, but that they had not expected the protests to take on a life of their own.

Administration officials have not been dismissive of the economic grievances, however. Akbar Torkan, a special adviser to Rouhani, discussed the impact of corruption. “One of the important and sensitive issues is corruption,” Torkan said. “Corruption is something that people understand and sense. When they enter a government agency to do something and they realize that unless they give money their work won’t get done, they sense the corruption. Worse than that, when they want to file a complaint about it they realize there is nowhere to file their complaint.”

Torkan also addressed the lack of accountability in spending with some government institutions, which is a theme some Iranian social media users alluded to regarding Rouhani’s Dec. 10 address to parliament. In his speech, Rouhani said individuals were receiving government money without any supervision or oversight. He said that when his administration put an end to this, various organizations — he did not say which ones — began “applying pressure.”

In that speech, Rouhani also said that there were six financial institutions controlling 25% of Iran’s currency market and manipulating it to their benefit. He said that he personally met with Supreme Leader Ayatollah Ali Khamenei and told him that the lives of 3-4 million people were being wasted due to such activities and corruption.