US President Donald Trump has voiced his support for Iran's protests, but the unrest could further complicate his decision on whether to waive nuclear sanctions next month. 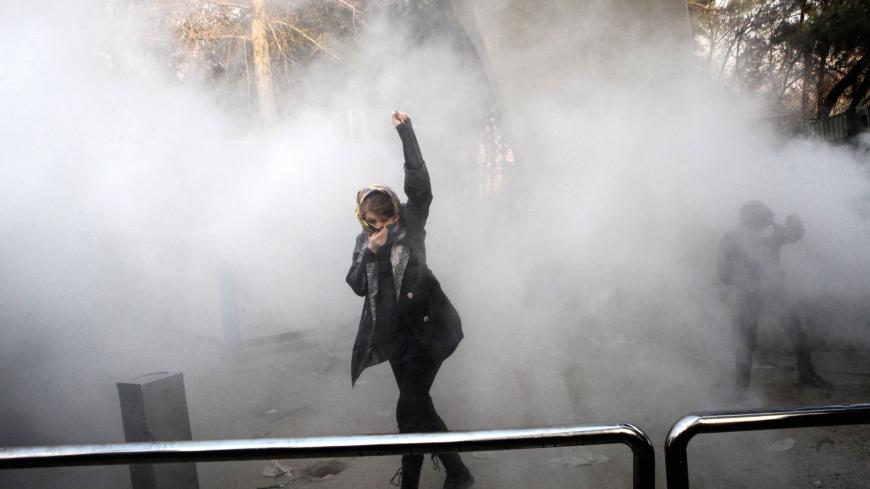 An Iranian woman raises her fist amid the smoke of tear gas at the University of Tehran during a protest driven by anger over economic problems, Tehran, Iran, Dec. 30, 2017. - STR/AFP/Getty Images

WASHINGTON — US President Donald Trump and members of his administration today continued to voice support for peaceful protesters in Iran and warned Iranian authorities not to crack down on the fourth day of demonstrations that have erupted in cities large and small around the country. Trump’s latest expression of support for the Iranian demonstrations came as Iranian President Hassan Rouhani, in his first comments on the protests, made during a Cabinet session and aired on Iranian TV, said he would work with parliament to address economic grievances of the population.

But the signs of Iranian unrest are likely to further complicate White House calculations as Trump decides whether to waive nuclear-related US economic sanctions in mid-January, which the United States is obliged to do if it intends to remain in compliance with the 2015 Iran nuclear deal, the Joint Comprehensive Plan of Action.

“Big protests in Iran,” Trump tweeted today before heading to play golf at his West Palm Beach golf club. “The people are finally getting wise as to how their money and wealth is being stolen and squandered on terrorism. Looks like they will not take it any longer.”

“The USA is watching very closely for human rights violations!” Trump warned in his tweet.

“The days of America looking the other way from the Iranian regime's oppression are over,” White House spokesperson Sarah Sanders tweeted Dec. 30. “America stands with the Iranian people.”

Secretary of State Rex Tillerson and US Ambassador to the United Nations Nikki Haley added to the Trump administration’s expressions of support for the Iranian people rising up against the regime, even while many Iranian analysts on the ground said it was still too early to say, beyond economic frustrations, what the motive of the protesters and trajectory of the unrest would be.

Several Iranian journalists and analysts suggested the protests, which started on Dec. 28 in Mashhad, the hometown of Rouhani’s conservative presidential rival, Ebrahim Raisi, may have initially been given encouragement by Rouhani’s hard-line political rivals but quickly grew out of their control. Demonstrations, recorded by cellphone video and spread on social media apps such as Telegram, erupted in over a dozen cities around the country over the weekend, attracting economically frustrated blue-collar workers in the provinces and young people — some who denounced clerics, the security services (the Sepah) and the regime led by Supreme Leader Ayatollah Ali Khamenei.

“As protests in Mashhad grew, it appeared from videos this wasn’t just about hatred aimed at Rouhani or the price of eggs,” Golnar Motevalli, an Iran-based correspondent for Bloomberg, wrote in an analysis on Twitter today. “Chants broadened to include the whole state system, including its leadership. … Pro-Rouhanists … believe hard-liner opposition and state security establishment provoked or even helped organize the Mashhad demos and … hadn’t factored in the possibility that the demos would get overtaken by their own opponents calling for their own end.”

The State Department urged other nations to join the United States in calling for the Iranian regime to respect their citizens’ rights.

“Secretary Tillerson reiterates the United States’ deep respect for the Iranian people,” State Department spokesperson Heather Nauert wrote on Twitter Dec. 30. “We call on all nations to stand with us in demanding the regime respect their basic human rights. #Iranprotests.”

Iran experts debated whether the expressions of American support would encourage demonstrators or alternatively could make them more vulnerable to the regime, which could portray them as foreign stooges. But many said the Trump administration’s message of solidarity with Iranian protesters was severely blunted by Trump’s travel ban on a half dozen mostly Muslim nations, including Iran. Iranians are also disillusioned by Trump’s hostility to the Iran nuclear deal negotiated by his predecessor and resentful that his continued threats to withdraw from it have contributed to economic uncertainty in the country, adding to the sense they had derived far fewer economic benefits than they had hoped for from the deal — though it is far from the only reason for Iranian social and economic malaise.

“The impact of [Trump’s] tweets has been marginal at best,” Motevalli wrote. “They’ve triggered a slew of angry comments, packed with ridicule. Across classes, factions and generations in Iran, there is a shared contempt for #POTUS whose policies look erratic and hypocritical.”

“Going back to Iranian anxieties over the economy, Trump’s policy toward the deal does nothing but fuel this as well as disillusionment at the idea that officials, wherever they are in the world, want to help ordinary people live better lives,” she wrote.

“Whatever the [US government] does or doesn't say about these protests, the reality is … that the world is watching what happens in Iran,” former State Department policy planning Iran expert Suzanne Maloney tweeted today. “How Tehran responds to the current protests will shape its relationship [with] the world, just as it did in 2009.”

More important than US statements may be what Washington does in actions to try to be constructive, Maloney said, relaying suggestions that the United States could use its influence with technology, satellite internet providers and social media companies like Facebook, Twitter and Instagram to try to keep communications channels open. It should also lift the travel ban, Maloney argued.

The Iranian unrest could affect thinking in both Washington and Tehran about the sustainability of the nuclear deal, Maloney told Al-Monitor.

“I think it's simply too early to say how with any real precision, but the most likely scenario is that the evidence of popular dissatisfaction and the inevitable repression will harden the Trump administration's position on sustaining the deal and provide additional incentives for ratcheting up new economic pressure on the government,” Maloney, now with the Brookings Institution, told Al-Monitor by email today. “They also may see some possibility of flipping the Europeans if the crackdown is fierce and well-documented.”

“But there are two big caveats: This situation is unfolding quickly and unpredictably, and there's not a lot of utility in getting out ahead of events,” Maloney continued. “Also, the domestic politics are a crucial factor in how the January decisions are played.”

“It's worth asking how the protests may impact the thinking of the Iranian leadership about the deal,” Maloney added. “On all sides there will be temptation to blame the deal and purported American failure to deliver on promised sanctions relief.”