Baghdad is demanding more than the Kurdistan Regional Government may be willing to give before the two sides can even begin talks to resolve their disputes. 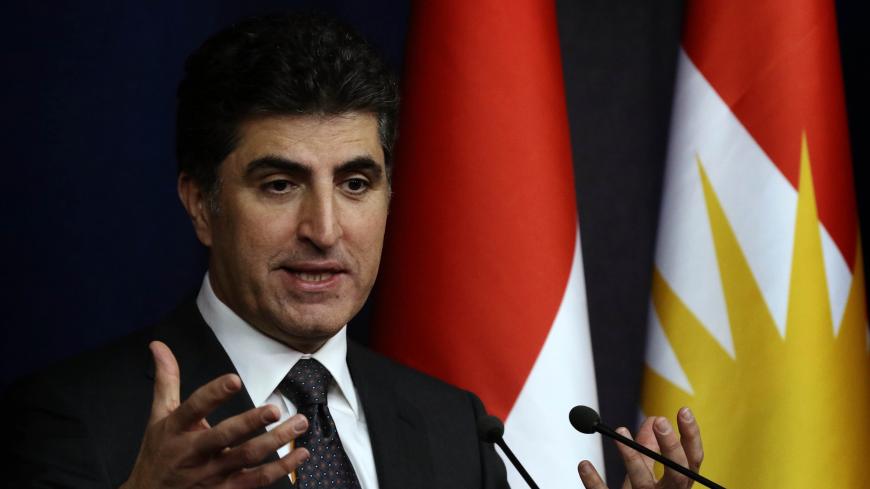 Trying to jump-start discussions with Iraq's central government, the Kurdistan Regional Government (KRG) in Erbil recently announced it will respect the Iraqi Federal Court's ecision that the KRG independence referendum was unconstitutional. But Baghdad has amplified its demands for opening a dialogue, which makes negotiations unlikely to happen anytime soon.

The Kurdish independence referendum, which voters overwhelmingly approved in September, greatly escalated problems between Baghdad and the KRG. However, both sides have called for negotiations to resolve the issues based on the Iraqi Constitution. Iraqi Prime Minister Haider al-Abadi has said Baghdad is continuing to work toward putting into effect some articles of the constitution that have never been implemented and would benefit the Kurds, while at the same time returning federal sovereignty to all areas of Iraq.

US Secretary of State Rex Tillerson touched on the subject this week during a speech at the Atlantic Council-Korea Foundation Forum in Washington DC, saying the United States will help officials implement the Iraqi Constitution completely.

"We have said we’ll stand with the Kurds to support them in the full implementation of the Iraqi Constitution … which, when it is fully implemented, will address a number of grievances that the Kurdish people have had for some time and we hope will lead to that unified Iraq," Tillerson said at the Dec. 12 meeting.

The KRG has refused to nullify the referendum results thus far. KRG Prime Minister Nechirvan Barzani and his deputy, Qubad Talabani, would have complied completely with the court's ruling, the source said, but former KRG President Massoud Barzani and his son, Masrour Barzani, chancellor of the Kurdistan Region Security Council, are the main obstacles; they insist "the people's vote will only be nullified by another public vote." Baghdad wants a guarantee that the KRG will not seek independence in the future.

The Iraqi government also demands the KRG turn over all future federal revenues, including those from oil sales and customs. Baghdad has clearly said that it won't receive any Kurdish delegations that don't include representatives of all five political parties with factions in the Iraqi parliament. Those groups are the Patriotic Union of Kurdistan, the Kurdistan Democratic Party, the Gorran party (Movement for Change), the Kurdistan Islamic Union, and the Kurdistan Islamic Group. According to the source, the KRG is likely to accept these two conditions; however, the remaining two conditions will deepen the chasm between Baghdad and Erbil.

The KRG — in particular, the Kurdistan Democratic Party (KDP) side — is unlikely to hand over the Peshkhabour border crossing willingly and allow Iraqi forces to deploy there, as this area has become the lifeline of KDP financing and reaching the outside world. The KDP also uses the crossing as leverage against its main rivals, the Kurdistan Workers Party (PKK) and the Rojava administration (the Democratic Federation of Northern Syria).

Currently, the KRG is struggling just to pay its public servants, who haven't yet received their September salaries. At a Dec. 11 meeting, the KRG Cabinet concluded the government can only pay public servants half their salaries every 60 days. The KRG also cannot pay its debts to Turkey and Russia.

As relations between Erbil and Baghdad have always been delicate, any simple disagreement can quickly become complicated. For example, in a Dec. 9 speech, Abadi praised Iraqi forces' victory over the Islamic State but avoided mentioning the sacrifices of the Kurdistan peshmerga forces — earning him so much criticism that the speech was later amended to include the peshmerga. It seems that despite pressure from the United Nations, the United States and the EU on the Iraqi government and the KRG, Erbil-Baghdad negotiations are unlikely to happen until Iraqi elections are held in May. And, of course, while commencing negotiations and constructive dialogue is incredibly complicated, reaching an agreement on prolonged disputes and issues will be even more so.