Rivals may team up to defeat Iraqi Prime Minister Abadi

Former Iraqi Prime Minister Nouri Maliki has expressed his solidarity with Iraqi Kurdistan, indicating the possibility of an alliance with his former rival Massoud Barzani. 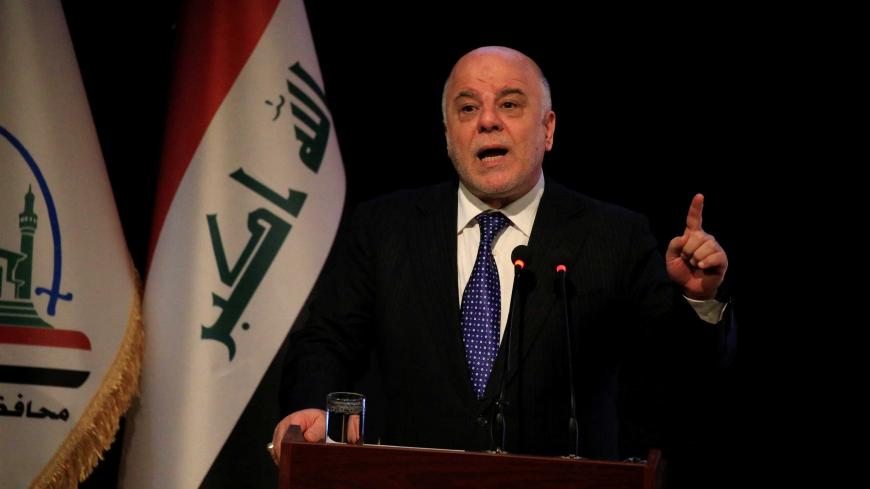 BAGHDAD — Two former adversaries appear to be warming up to each other to collaborate in Iraq's presidential and parliamentary elections set for May — possibly at the expense of the nation's top politician.

Iraqi Prime Minister Haider al-Abadi now faces a potential rapprochement between two of his rivals: Vice President Nouri al-Maliki and Massoud Barzani. Maliki is the current leader of the Islamic Dawa Party, and Barzani is head of the Kurdistan Democratic Party (KDP) and former president of the Kurdistan Regional Government (KRG).

No one actually expected a rapprochement between Maliki and Barzani. However, their need to achieve their targets in the upcoming elections and to tame Abadi pushed both rivals to bridge the gap that opened between them in 2010 and lasted through 2017.

The last time Maliki and Barzani agreed on anything was when all political coalitions decided to renew Maliki's four-year term as prime minister in 2010.

On Dec. 23, during an interview with Kurdish media outlet Rudaw (which is funded by Barzani's nephew), Maliki said, "Punishing Kurdish people in order to get more votes in elections is shameful, unethical, non-patriotic and illegitimate." He was referring to the Abadi government's continued refusal to pay wages to the employees of the Iraqi Kurdistan Region. It was actually Maliki who introduced the pay sanction during his tenure as prime minister over an oil dispute.

Barzani's KDP has changed its discourse toward Maliki since the latter made that statement. Maliki is no longer blamed for the "starvation" of Kurdish people or for working against the KRG. Statements describing him as harsher on Kurds than Saddam Hussein — as Barzani said in August — are no longer heard. In fact, some KDP leaders are now saying that Maliki wants to resolve the conflict between the central government in Baghdad and the KRG in Erbil.

One of the deputies of the Dawa Party told Al-Monitor on condition of anonymity that Maliki is discussing whether the rapprochement with the KDP would become an actual alliance and how such an alliance might affect the future of the Dawa Party's candidates in leading the next government.

The deputy said Maliki will soon meet with the National Iraq Alliance — mostly a Shiite umbrella coalition that includes the Dawa and State of Law parties — to explain his potential alliance with Barzani. Their connection concerns the coalition because of the role Barzani played in the KRG independence referendum, which Iraq's Supreme Federal Court found to be unconstitutional. But the KDP, which views Abadi negatively, sees the advantage of the connection, which gives Abadi reason to worry.

Maliki attended the Jan. 4 meetings organized by the official envoy from the Iraqi Kurdistan Region to discuss the consequences resulting from the Kurdish referendum of Sept. 25: Federal forces fought for and won control of the oil-rich disputed areas the KRG had held, and the government imposed sanctions such as banning flights and demanded control over border crossings. Meanwhile, Barzani stepped down as KRG president.

Opposing Abadi would be the main reason Maliki and Barzani would consider forming an alliance. Abadi deprived Maliki of a third term as prime minister and kept Barzani from realizing his dream of Kurdish independence.

Maliki's media adviser, Abbas al-Moussawi, told Al-Monitor in an interview, "There are no official meetings [scheduled] between Maliki and Barzani, but the meetings between the State of Law Coalition and Kurdish political forces are ongoing. Every popular or political Kurdish envoy coming to Baghdad is meeting Maliki."

Tariq Sadiq, a KDP deputy, was more straightforward. He said Maliki and KDP leaders are meeting, and the rapprochement might "become a political alliance in the future."

However, a source in the Islamic Dawa Party close to both Maliki and Abadi said, "There are two indicators that will foil Maliki's attempts to get closer to Barzani."

The source told Al-Monitor on condition of anonymity, "The first indicator is the rejection by some Kurdish political parties of the rapprochement between Maliki and Barzani. The second is related to Iran, which believes that Barzani harms its interests in the Iraqi Kurdistan region and that he allowed the establishment of an operations center in Erbil [for groups] stirring the latest protests in Iranian cities."

Maliki is trying to return to office through the Kurds this time. The political blocs in Baghdad believe Kurds are a decisive card in the election of any prime minister.

Hicham al-Rakabi, director of Maliki's press office, said in a statement Dec. 26, "There is a possibility for an alliance with all political parties, including Barzani’s [KDP], provided they believe in the [will of the] political majority."

In the run-up to the elections, we will see the formation of unlikely alliances to prevent Abadi from winning a second term.

A Maliki-Barzani reconciliation will aim to give Maliki the premiership again and bring Barzani back to the Kurdistan leadership. Still, everything is happening behind closed doors, and the two men have yet to announce their plans for Baghdad and Erbil.