Never-ending 'emergency' in Turkey is actually creating one

The government's self-extended empowerment has become a way of life in Turkey, causing grievances even among security personnel. 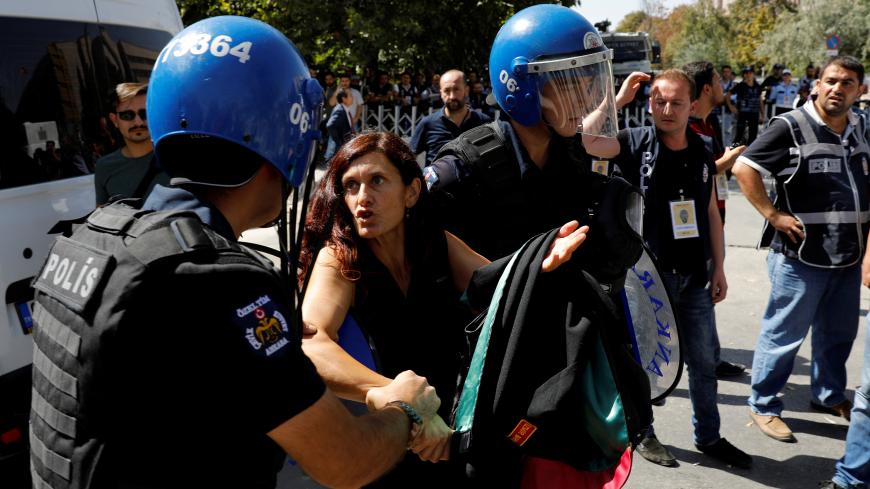 Lawyer Ruken Arslan is detained by riot police during the trial of two Turkish teachers, who went on a hunger strike over their dismissal under a government decree following last year's failed coup, outside of a courthouse in Ankara, Turkey, Sept. 14, 2017. - REUTERS/Umit Bektas

The phrase "state of emergency" sort of loses its urgency after more than a year. Yet Turkey’s National Security Council met under President Recep Tayyip Erdogan at the end of October and recommended extending the state of emergency for three months — for the fifth time.

Although officials have relaxed some rules on foreign travel, commercial activities and appointments and affairs of civil servants, nobody expects emergency rule to be abandoned before the summer of 2018.

It has become a way of life in Turkey. People are used to hearing odd explanations for it. The latest strange utterance came in a statement by Minister of Environment and Urbanization Mehmet Ozhaseki, who said national security threats posed by earthquake risks can best be handled under emergency rule, and highly technical urban transformation — which is a priority issue for the country — will proceed most efficiently by issuing government decrees instead of enacting laws. He's not the only senior official in Ankara who thinks this way.

As Turkey has been in an armed struggle with the PKK for 34 years, perhaps Bozdag was implying we should expect emergency rule for many years to come.

Quiet dissent has in recent weeks grown louder in the state bureaucracy — and even in the security apparatus — against the routine extension of emergency rule and the undemocratic practice of governing by decree. State legal and security bureaucracies are struggling under the major burdens of appointments made by simple decree and of being denied access to the Constitutional Court to appeal rulings by decree. The bureaucracies also must deal with the obscure definitions of judicial process related to expulsions and suspensions from duties. These bureaucracies risk having their reputations tarnished.

The Emergency Rule Appeals Commission was established Jan. 23 and began accepting applications July 17 to study and determine the legality of emergency decisions. Within the first month of its inception, more than 100,00 appeals were filed.

In the aftermath of the July 2016 coup attempt, 26 decrees were issued, 111,240 public servants were discharged and 32,180 were suspended with or without pay. In the same period, hundreds of organizations and companies were seized by the state.

The majority of state employees discharged or suspended were police, gendarmerie and soldiers. The initially popular slogan “Traitors should fear the status of emergency rule” has lost its appeal under the complications of appointments, long delays in hiring new personnel, postponed legal processes and questions of morale and motivation among security personnel.

Security sources told Al-Monitor that there is extreme confusion about new appointments to fill vacancies and reassignments.

“In the past, our appointments and reassignments were all perfectly organized by the book. Now, however, we start the day by checking [to see] if we are still on duty or if we have been discharged or suspended. We have to check our official email traffic because we can easily be assigned to another city with an email message. We are told to report to our new duty station within 15 days. Just think of the problems we have to deal with [regarding] our families, especially with children going to school,” a police official in Istanbul told Al-Monitor on condition of anonymity.

There is also discord about the authority and functions of officials and their regional jurisdictions — for example, whether the periphery of towns in the southeast will be under police or gendarmerie jurisdiction.

The workload of the security forces has increased beyond reason. Not only has the workforce been decimated by mass discharges, detentions and suspensions from duty, but the amount of effort required for the struggle against Gulenist networks, the PKK, violent Salafi-jihadi networks and radical leftist armed groups is staggering. Another security official told Al-Monitor that the number of people in his unit has dropped to seven people — from 12 before the coup attempt — even as the workload has gone up fourfold. New hires still have to be vetted, even municipal administrative workers. Vetting is supposed to be concluded within 60 days, but now it sometimes takes as long as six months. This colossal problem of filling the vacancies further amplifies the workload of intelligence and security personnel.

Emergency rule was declared to enable rapid restructuring of state bodies after the July 2016 military uprising and for cleansing the state and society from Gulenists. But it's clear the strategy is backfiring. Instead of being a solution, the emergency rule itself is now becoming the problem.