The Turkish public is divided over the government’s decision to attach the Gendarmerie Command to the Ministry of Interior. 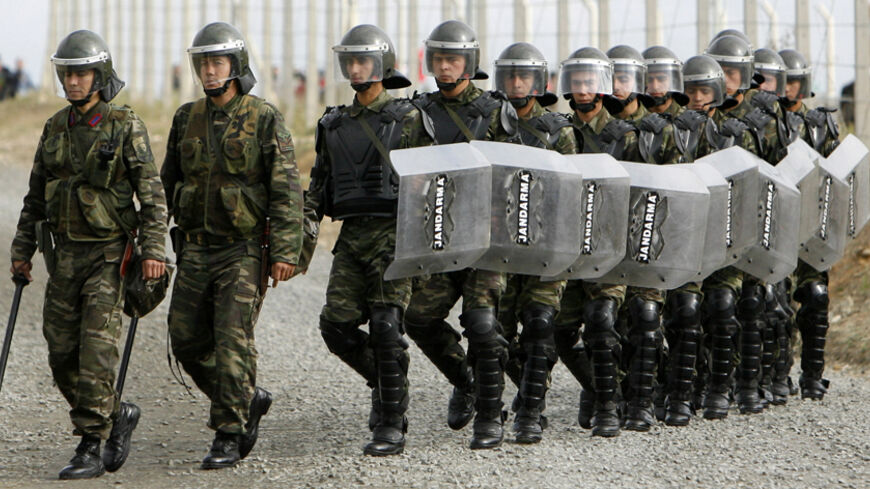 When you enter any gendarmerie post, Turkey’s paramilitary rural police force in 81 provinces and 957 towns, the first slogan on the wall is always Turkey’s founder Mustafa Kemal Ataturk’s words: “The Turkish gendarmerie is an army of law.” The gendarmerie, with its 175-year history, has a current strength of about 190,000 (31 generals; 28,000 officers and noncommissioned officers; 40,000 professional specialist sergeants; 3,500 civilian workers/clerks and 117,000 conscripts). It is responsible for 80% of Turkey’s territory. With its commando brigades, air elements, special forces battalions and van-based corps, which is Turkey’s key unit for dealing with the Kurdistan Workers Party (PKK), the Gendarmerie Command is a fully-fledged military machine.

But Ataturk’s words in every gendarmerie post may be removed in November, after Prime Minister Ahmet Davutoglu announced that the Gendarmerie Command would be detached from the Chief of Staff of the Turkish armed forces and attached to the Ministry of Interior. After anticipated parliamentary action, the era of a gendarmerie, which is currently commanded by a four-star general, will be history. All personnel action will be handled by a civilian organization that will probably be led by a civilian of governor rank.

On the eve of this major transformation, which will have deep implications for the security structure of the country, the debate on the subject is almost farcical. For example, nine daily newspapers that led on Oct. 23 with the report that the gendarmerie was to be put under the Ministry of Interior, found the most important issue to be discussed was what would be the color of the new gendarmerie uniform instead of its current khaki green.

Three major trends of opinion have developed around this major decision. The first group unconditionally supports the idea of attaching the gendarmerie to the Ministry of Interior, the second supports the decision for political and technical reasons and the third group, although agreeing in principle to putting the gendarmerie under civilian control, asks, “Why now?”

The basic argument of those who support the proposal without reservation is that with the gendarmerie under civilian authority, internal security will be demilitarized and freedom will flourish. According to columnist Gulay Gokturk of the pro-government daily Aksam, with this bold step the Turkish military will be losing one of its major instruments of pressure on politics and society. According to Bulent Orakoglu of the pro-government daily Yeni Safak, with this action freedoms will be enhanced, internal security will be more effective by putting it under one management and major demilitarization will be achieved. Pro-government media reported that Permanent Representative of the European Union in Turkey Stefano Manservisi has praised this reform and said that demilitarization of border security will facilitate the dialogue on free movement.

There are some who oppose the proposal on political grounds. Umit Ozdag of nationalist daily Yeni Cag asserts that the intention is not further democratization but to implement the Justice and Development Party's (AKP) plan of filling gendarmerie ranks with its partisans. There may be some element of truth in this, as when you transform 120,000 conscripts to civil servants, AKP’s provincial representatives will have ample opportunities to find jobs for their supporters. But according to associate professor Sait Yilmaz this decision is actually an outcome of negotiations with the PKK/People's Democracy Party as part of the Kurdish negotiation process. Yilmaz thinks the gendarmerie will thus be pacified and PKK militants will be allowed to fill the political and security vacuum as “local self-defense forces.” This naturally will be the first and most important step of setting up an autonomous Kurdish administration. This is why you would need a gendarmerie force that will be taking orders not from the military high command, but from the political regime and act in harmony with the wishes of the Ministry of Interior.

According to retired Lt. Gen. Ismail Hakki Pekin, the gendarmerie is an institution that has its own robust organizational culture and values, with established traditions that have been able to fuse military discipline with its judicial functions. From that point of view, the gendarmerie is a vital security instrument in these difficult days of the country. Pekin believes that what prompted the government to take such a decision at such a sensitive period is the desire of decision-makers to have direct authority over gendarmerie forces in cities and towns and by eliminating the gendarmerie’s relative autonomy to turn it into an “AKP Gendarmerie” as they did with the “AKP police.”

Another security official in Ankara, who thinks along the same lines but does not wish to be identified, said the government was particularly rattled by the gendarmerie’s role in apprehending weapons-laden trucks of the National Intelligence Organization, or MIT, at Adana. The AKP government doesn’t want to have a similar experience ever again.

There are some who challenge the decision for technical reasons. According to a serving senior gendarmerie official who did not want to be identified, the decision does not appear to be based on economic costs, or the balance sheet of benefits and disadvantages and security risks it may entail. The same official notes that the gendarmerie budget that was $3 billion in 2013 will now require $10 billion: 70% of the additional budgetary burden will be for salaries for civil servants who will be hired to replace the unpaid conscript soldiers. Then there is question of effectiveness. In 2008, external security of all prisons in Turkey was taken from the gendarmerie and this was publicized as a major reform. In the six years since, the quality of external security of prisons outsourced to private companies is worse than gendarmerie days. The official also noted that the gendarmerie will have problems finding qualified civilian officials for the lower ranks because of rough working conditions and frequent reassignments. As such, this demilitarization that was mistimed and hastily hatched could lead to serious security gaps.

Then there are those who criticize the timing of the decision. Military affairs writer Lale Kemal, in an article titled “Long awaited gendarmerie reform came at the wrong time,” wrote it is not only late but also designed to reinforce the authoritarian tendencies of President Recep Tayyip Erdogan. The timing of the move lauded as demilitarization has actually led to doubts about its intentions.

Deputy of the Republican People's Party Bulent Kusoglu draws attention to another point when he says the new structure aims at putting the gendarmerie under political rule. He says hastily attaching the gendarmerie to the Ministry of Interior without adequately studying its implications will actually provide significant advantages to the AKP in the approaching general elections.

The unease of Chief of General Staff Necdet Ozel about the issue found its way to newspapers. The military has misgivings about several issues:

To sum up, after the decision to put the gendarmerie under the Ministry of Interior, those who support the action emphasized the demilitarization aspect. Some of its opponents were worried about politicization of the gendarmerie, while some others approached it from angles of a loss effectiveness and efficiency. A third group finds the timing inappropriate. What is clear is that the government’s decision to demilitarize the gendarmerie has not fully convinced the public both with its contents and timing. The public still can’t find the answer to the question, “Why now?"