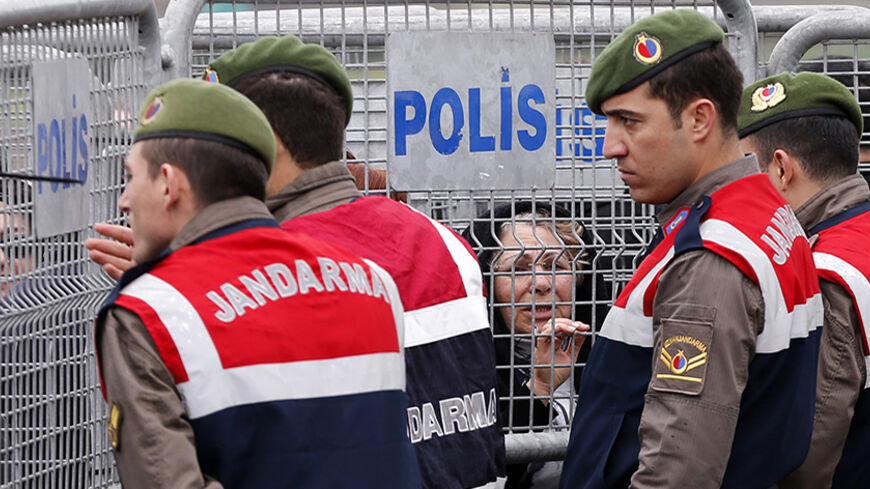 Gendarmes stand guard as visitors wait behind security barriers outside the courthouse in Silivri near Istanbul, March 11, 2013. - REUTERS/Murad Sezer

On Oct. 21, Turkish Prime Minister Ahmet Davutoglu introduced the framework of his government’s new bill aiming to change the bureaucratic alignment of the law enforcement agencies. Davutoglu — who did not provide the public with a detailed draft of his plans — seeks to restructure the Interior Ministry and the police with an emphasis on a new parliamentary watchdog commission representing all elected parties to keep law enforcement forces accountable in case they abuse their power.

“We prepared the reform package on domestic security and the protection of freedoms after a week of intensive efforts,” Davutoglu said. “All authority over the personnel and the records of the Turkish gendarmerie and the Coast Guard will be transferred to the Interior Ministry — with the exception of matters relating to the military. It is high time to strengthen Turkey’s civilian and democratic character.”

It certainly is important to strengthen the country’s democracy, but is distancing the gendarmerie from the military the right step? Ersan Sen, a well-known law professor in Istanbul, told Al-Monitor, “In principle, there is nothing wrong with bringing the gendarmerie forces under the total control of the Interior Ministry. Although there is no constitutional obstacle, this is not possible to do without changing the present law. The question is, do we create a new law and propose a change in the system every time there is something that does not fit with the interests of the government in power?” He said, “Moreover, the personnel of this force are all graduates of military higher education. If it is put under civilian authority, how will they cooperate with the military? How will they hire the new personnel? Will the military budget continue to pay for the gendarmerie; if not, why should we insist on calling this new force gendarmerie? It will be a police force.”

Some experts saw the move as linked to Turkey's ongoing peace negotiations with the Kurdistan Workers Party (PKK) or to preventing the gendarmerie from helping law enforcement pursue corruption charges against the government.

The gendarmerie provides security in rural areas. The country’s Kurdish population in the eastern and southeastern provinces sees the gendarmerie as the state’s dirty hand and violator of their human rights. The new security package comes as the government intensifies its negotiating efforts with the PKK, classified as a terrorist organization by both the United States and the European Union.

In the Ankara beltway, many speculate that the government will seek to change the uniform of the gendarmerie to give it a new look, hoping that Kurdish abhorrence for and objection to the force will somehow decrease. But whether the status of the gendarmerie is part of the government’s negotiations with the PKK, it is already considered a dead proposal.

“The dilemma is not about whether the Interior Ministry should be the body to control all the security law enforcement under it. The issue is whether the government is proposing this to control it all,” Sen said. Indeed, military analysts speaking to Al-Monitor on condition of anonymity question whether the government is doing this to further enfeeble the military. “If that is the case, think about this: Is this the right time to make such a change when the fate of the negotiations with the Kurds is not clear — when the risks across our borders have peaked and that it is not only the Kurdish fighters who can threaten the security of the homeland, but extremists, too? How wise is it to make a change now in the system of the gendarmerie?”

The daily Taraf reported Oct. 23 that the chief of the Turkish General Staff sent a confidential note to the prime minister’s office. “This is not suitable environment to make such a change. Making such a reorganization at this time will create a security lapse,” the note read. “The gendarmerie’s duties and responsibilities are clearly set in the law; the views of the chief of General Staff on this proposal is sent to the prime ministry as a 'secret' and 'eyes only' note and it is the government’s authority to inform the public on this matter.” The paper also contended that the government wants to make this change to prevent the gendarmerie forces from helping law enforcement in pursuing the corruption charges of December 2013 since dismissed by the prosecutor.

Military analysts speculated that this was similar to previous tactics, where the government has floated ideas to the public to take its pulse and measure the reaction from related state bodies. “This bill will soon be put to rest,” one military analyst told Al-Monitor. “Also think about this: The government reassigned hundreds and hundreds of police officers in the aftermath of the corruption scandal. Why? Because they are directly under the control of the Interior Ministry. You cannot do the same to the gendarmerie, because they are under the control of the military. You cannot arbitrarily assign them like you do the police. They may be also after that, but it won’t happen. This bill will be put to rest soon.”