The Democratization Package That Missed the Point

Ersan Sen, a well-known lawyer, argues that the government’s democratization package missed the point because it did not offer any changes to political parties or the election law put into effect after the 1980 military coup. 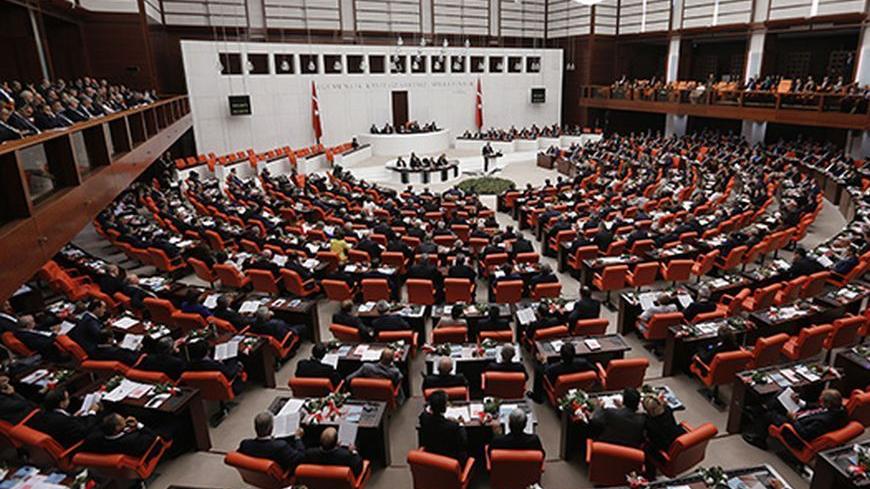 After a summer recess, the Turkish parliament convenes for debate in Ankara on Oct. 1, 2013. - REUTERS/Umit Bektas

Turkey is due for a significant legal update. On Monday, Sept. 30, Turkish Prime Minister Recep Tayyip Erdogan announced the long-awaited democratization package. The next day, Oct. 1, the Turkish parliament reconvened from its summer recess and Speaker Cemil Cicek said that the 17-month-long effort of the parliamentary constitutional reconciliation commission, tasked to write a new constitution for the nation, is not looking promising.

“Despite the longing and expectation of our nation, despite our promise to our nation, despite that it is a necessity and obligation, for example, we have not been able to put a new and civilian constitution before the people based on societal consensus, having its priorities, principles, balance and standards,” he said.

Although the proposed legal changes have not yet been officially submitted to the parliament, and therefore it is still premature to conclusively talk about the contents of these new potential articles, it is a fact that the government has enough seats in the parliament to accomplish its goal of enacting these bills, whereas writing a new constitution cannot be accomplished by one party’s will.

Given the pace of all these legal updates to be accomplished, Erdogan therefore must have felt the need to state the following last night at the parliament’s opening reception:  “Among the changes into law, none requires constitutional amendment. We took on this path believing it. All others that require a constitutional amendment, that is being worked upon.”

In that light, the question may not be whether the democratization package went far enough in addressing the people’s needs, but why it took so long for the government to make it happen. And the dilemma in answering this question has already allowed opposition parties and the people to question whether the ruling party is investing in the upcoming election season, due to start in March with local elections, followed by the election of the president in August and the general election in 2015.

Not that it is easy to please everyone, but the Erdogan government’s top-secret approach in preparing this package, showing it only to an exclusive handful of members of the ruling party, has built a different kind of anxiety about its content. Yet the prime minister somehow overkilled his public perception management by spending two-thirds of his speech Monday on lowering those expectations.

“Those who are expecting an immortality elixir have a wrong expectation from this package,” he said, for example. In the broad view, the democratization package takes the military coup of May 27, 1960, as the basis of all things that went wrong in the country. It then proposes to end the national oath of allegiance in schools; to allow Kurdish in private schools; and to lift the dress-code regulation that banned, in practice, women with headscarves working in state institutions and attending public universities. Put simply, this democratization package presents itself as an effort to please Kurdish nationalists and religious conservatives.

“When you talk about democratization, it only has one key element, and that is the elections. Other issues are all related to the freedom agenda,” Ersan Sen, a well-known lawyer with a special expertise in criminal law, told Al-Monitor. “The prime minister only opened to debate the election law and lowering the 10% threshold for being represented in the parliament. But from what I gather, he is not interested in making any change in that respect.”

So for a prime minister who takes pride in reminding the people that he was elected with 50% of the vote, he continues to choose to benefit from the 1982 military coup constitution that brought about this high threshold in an attempt to exclude the Kurds from participating in political life, and therefore to impair the country’s parliamentary system short of continuing its path as a true representative body of the people.

Erdogan also did not say a word about changing the political parties law introduced after the 1980 military coup, which is perceived by the people by and large as the reason for all the imbalanced representation in the parliament. Yet he has proposed lowering the 7% threshold to 3% for political parties to be able to receive Treasury funding for elections, which is an attempt to please the pro-Kurdish Peace and Democracy Party, BDP.

BDP members, however, have been strongly critical of this democratization package, and argue that it does not meet their expectations. For example, they cite their disappointment at the decision to allow Kurdish in private schools, but not in public schools. The fact of the matter is that though Erdogan went as far as he could go within the constitutional limits, as Article 42 states, “No language other than Turkish can be taught or educated to Turkish citizens as their mother tongue in any language or education schools.”

Remember, one of the stiff debates in the parliamentary constitutional reconciliation committee was the argument over whether to allow Kurdish as a second language, and that there has been no consensus on that topic yet. In the absence of it, Erdogan has no legal authority to allow Kurdish in public schools.

Moving on, the Erdogan government’s decision to end the national oath of allegiance at schools is also a step taken to please the Kurdish nationalists, who took it as an offense to say, “How proud is the one who says, ‘I am a Turk!’” This allegiance was embedded in the education system through a regulation — not a law.

“Despite what the BDP deputies publicly say and complain that the government did not go as far as it could, I believe the opposite," the lawyer Sen told Al-Monitor. "The Kurdish nationalists are also well aware that they cannot get all they wanted in one big giant step, for they need to warm the public to all these changes. But it is clear that the government is moving in a direction to please them in the end. So I think they actually gained plenty in this package.”

Sen continued, “Although the government is still not admitting that it directly engages in talks with Abdullah Ocalan, it actually does take a person who is sentenced to prison in heavy confinement and put him at the center of resolving the country’s Kurdish dilemma. This is, in the first place, against the law of the country.”

Erdogan also proposed with this democratization package to criminalize actions preventing the practice of religion. “It’s already criminalized to prevent anyone from religious practice, or to swear or insult anyone’s religion,” Sen said. “Articles 115, 125 and 216 of the Turkish Criminal Law regulate those issues. In fact, the world is well aware of this Turkish law through the legal case opened against Fazil Say, the famous pianist. He was convicted of the crime."

Sen added: “It’s not that we lack any such legal regulation on those issues, but what I understand is that the government is going to increase the penalties for such crimes. That being said, we need to think carefully how we shape freedom of expression in all of this. I did not hear a word addressing the challenges in society concerning the freedom of expression or opinion.”

Sen, however, flatly dismissed some opposition Turkish media reports which claimed that these changes could even make it illegal to defend secularism. “I don’t believe that these changes are made to criminalize secularism,” he said. But the fact of the matter is that Turkey has a majority Muslim population, and the population is divided over determining the role of religion in public life. For example, Erdogan’s decision to abolish the dress-code regulation that prevented women wearing headscarves from working in public institutions or attending public schools received mixed reviews. That dress code was also introduced after the 1980 military coup.

“One needs to tie this decision of annulling this dress code to the fact that it was introduced into practice in the first place. We are all trying to undo all these prohibitions that were introduced in 1982,” Beyza Bilgin, a well-known, respectable theology professor, told Al-Monitor. “The more the ban on headscarves continues, the more men win. They, for example, become the dominant faces in the workplaces. Men did not allow girls to get educated in the first place, just because they are girls; they allowed them to go to school for the sake of headscarves. They did not do it because it is an order of Islam to educate girls. If that were to be the case, they would have accepted girls in schools long ago. But madrassas never accepted girl students.” Bilgin added: “Women were never allowed a position during Islamic governance, so why should there been a debate whether to allow them with headscarves or not?”

While there is no debate that the majority of Turkish population are believers, the role of the Religious Affairs Directorate (RAD) over the polarization of people on the place of the Quran in political and civil life isn’t easy to dismiss, because it serves only the Sunni Muslim majority of this nation, ignoring others. And one can also question whether the RAD has been successful enough in producing an interpretation that could help addressing the fears of some segments within the Sunni Muslim majority, and in whether the RAD has considered that religious practices can be used as a means to keep people backward, and to have people place less value on women than on men.

In that light, it may be unreasonable to expect Erdogan all at once to grant Alevis the freedom to exercise their faith as they wish, or to allow the Greek Patriarchate to open the Theology School in Heybeliada, as one would have wished; still, as the proposed change into law states, it would be a criminal act to prevent those other than Sunni Muslims from having the full privilege of freedom of religion in the country, and therefore it seems that the opening of Heybeliada Theology School should be allowed. That said, the government claims that its studies on these issues continue, while making it abundantly clear that the Greek minority won’t get its dream until the Turks in Greece are allowed equal religious freedom.

“Whatever the reasons are, you can’t give freedom to headscarves and ignore the rest of the population,” Sahin Filiz, a philosophy professor, told Al-Monitor. "If it is free, you need to also allow, let’s say, Suryani people in their robes to come and serve in public institutions if they choose to work there, or a Christian to carry the cross, or a Jew to wear his kippa. The religious freedom is not only about headscarves.” Filiz continued: “What worries is me that the government is projecting such an image, that it is only those who wear the headscarves are Muslims and the others are not. This is not right, and it has a potential to divide and distance people in ways that is only worrisome.”

Only time will tell, though, how Turkish society will really evolve and decide on the role of religion in their political and societal lives. And it is up to the opposition parties to prove whether they can convince the people that they can do better once elected, if they are really sincere in their concerns about an Islamization of Turkey.