In the post-Gezi Park protests era, Prime Minister Recep Tayyip Erdogan is being pressured to give up on writing a new constitution, at least until the March elections are over. 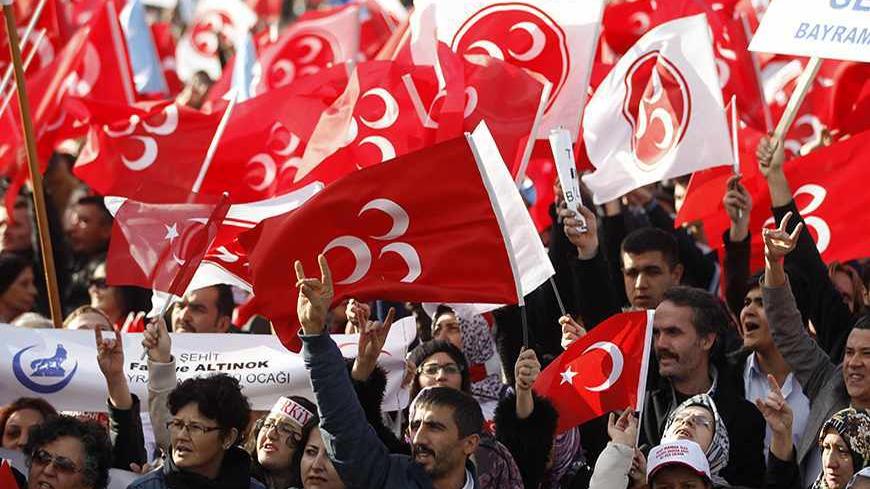 Supporters of the Nationalist Movement Party (MHP) make the grey wolf sign of the party as they wait for the arrival of party leader Devlet Bahceli during a rally in Istanbul, Oct. 5, 2013. - REUTERS/Osman Orsal

The chances for the Turkish Prime Minister Recep Tayyip Erdogan’s government to write a new constitution for the country are growing dimmer.

First, in October, Devlet Bahceli, the opposition leader of Nationalist Movement Party (MHP), reacted harshly to the announced democratization package. “In this package, there are political minefields that threaten Turkey’s future and challenge its existence,” he said, and linked it to the process of writing a new constitution. “The Constitutional Reconciliation Commission (CRC) has reached agreement so far on 59 articles. No one has the right to play games with the Parliament suggesting that these four parties reached consensus on those 59 articles packing them with the democratization package.”

Interestingly enough, MHP has been quite helpful in the past to support AKP proposals in making changes to laws — as on the headscarf issue. This time though, as they perceive the democratization package as a means to help the Kurds in their desire to build an autonomous administration in the east and southeast part of the country, they became the “No!” party to make legal changes. In fact, none of those agreed-upon articles at the CRC addresses the controversial issues of the country.

The CRC started its work in May 2012 with three deputies from each of the elected parliamentary parties (AKP, CHP, MHP and BDP) to write a new constitution.

The debate still continues whether the first three articles of the constitution can be up for change or not — which is directly linked to the debates over the nature of the state, that is secularism. They have also failed to reach any consensus on issues related to the country’s Kurdish dilemma. There is also no agreement on the definition of citizenship or what even to call the people of Turkey: The ruling party suggested that it was politically incorrect  to call the people “Turks” because it is the name of an ethnicity, excluding Kurdish citizens. While the country’s identity crisis is at full speed, the CRC — so far — has not accomplished a breakthrough in building national common sense on these troubling issues for the country.

In this framework, the main opposition Republican People’s Party (CHP) also took a step backward after it initially suggested that it would vote in the Parliament to enact all these agreed-upon articles into law.

“CHP is committed to the rules that were put in place in forming the Constitutional Reconciliation Commission, and therefore is committed to Article 6 of the protocol,” Haluk Koc, deputy chairman of CHP and the party spokesman, said yesterday, Nov. 6. “If all the four parties act together in passing these articles into law, CHP will remain loyal to its commitment.” He added: “Under these circumstances however, it is out of the question for us to continue the negotiations bilaterally with the AKP over changing the constitution.”

Riza Turmen, a member of the CRC from CHP, however, said they continued the dialogue with the MHP over this issue, and that there still remained a possibility to persuade them to pass these articles into law. “We, as the party, believe these 60 articles (after Bahceli’s statement, CRC reached consensus over another article) may benefit the public life for the better, and therefore, we would like to enact them as soon as possible. But the CRC protocol makes it very clear that all these changes need to be ratified by all four parties, and in the absence of them all, the legitimacy of these articles will be open to debate. There is no need to introduce any article into law that will lack public support,” he told Al-Monitor.

“Yet we are still arguing over the first three articles of the constitution, whether they can be up for change or not, and that goes directly to the heart of the debates over secularism, freedom of religion and conscience. There are also other issues that are directly linked to the Kurdish issue. There is no consensus on those matters, like whether the country has two official languages, and whether education can be allowed in both languages. And there is certainly a disagreement over changing the country’s parliamentary system to a presidential one.” Tumen added: “If the prime minister really wants the work of CRC to advance, he can decide even today to withdraw his proposal on shifting the country’s governance into a presidential system. It will immediately boost the number of articles agreed upon.”

In other words, the CRC has not been able to produce any consensus over tensions creating controversial issues. And it looks unlikely that they can produce a different outcome, now that the election season has opened. The first ballot box will be up in March 2014 to determine local administrators, to be followed by the election to choose the country’s first president by public vote in August 2014 and, finally, the general election in 2015.

In the post-Gezi park protests era, Erdogan may see new challenges if he pushes for his own draft of a constitution as a referendum. People will likely take to the streets, and protest the government regardless of whether they can get the majority’s support or not. And Erdogan won't likely choose to take that path because the current constitution favors him.

This current constitution was put into force in 1982, after the country’s last military coup granted the armed forces a guardianship in protecting the state. Today, the military’s role in the country’s civil political life is no more, and the ruling party — with a staunch dominance over the politics — has assumed the new guardianship. If Erdogan decides to run for the presidential office, and if he gets elected, he will certainly benefit the most from the powers given to him by this constitution. Therefore, he may easily decide not to push for passing a new constitution before the elections are over.

The current political system is pregnant to end political stability in the country. After all, the people will elect the two top leaders — the president and the prime minister — by public vote. This could easily create a challenge between the elected leaders of the country as to who really has the last word on critical matters concerning domestic and foreign issues. It surely won’t be an easy ride. It’s however clear that those protesters on the streets of Istanbul, Ankara and elsewhere in June in support of Gezi Park have shown Erdogan his limits, and it is still unclear how or whether he will adopt to this new climate in the country. After all, he wanted to change the constitution and introduce a presidential system, and he simply can’t do it with the current tension in the Parliament and on the streets.