Turkey has criminalized emergency care outside the hospital without government authorization and imposed stiff penalties. 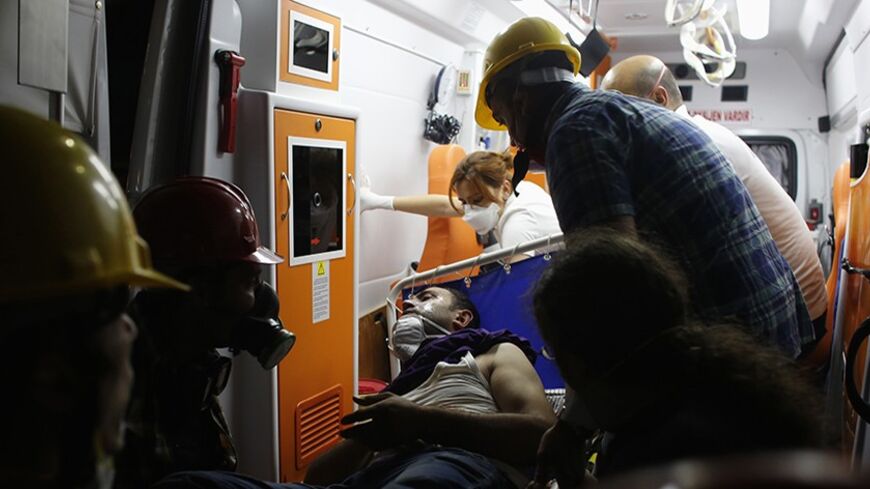 An injured protester is carried to an ambulance outside of Gezi Park in central Istanbul, June 15, 2013. - REUTERS/Murad Sezer

“With this new law, a doctor will face to risk the criminal penalty of up to three years in jail, like those deliberately injuring a person, while taking care of someone requiring urgent medical attention outside the hospital,” Dr. Filiz Unal Incekara, Turkish Medical Association (TTB) board member, told Al-Monitor. “The land of the law now — in brief – criminalizes doctors’ Hippocratic oath, and the principles embraced in the Universal Human Rights Declaration that prioritize saving lives before anything else. That cannot be acceptable!”

This new law is part of an omnibus bill composed of 56 articles approved by parliament this month. This specific legislation compels doctors and health professionals to apply for official permission before they may administer emergency first aid. Without that authorization, the medical personnel could face one to three years in prison and fines of up to $1 million for breaking the law.

“The technical way in how the parliament makes law is absolutely undemocratic,” Riza Turmen, a former judge of the European Court of Human Rights and Izmir deputy of the main opposition Republican People’s Party (CHP), told Al-Monitor. “It is only a handful of people in the government and a few bureaucrats deemed close to the ruling party in related state institutions who decide on drafting a new law, and then that is passed to the parliament to be approved. In a democracy, however, when you make a law affecting the work of, let’s say, doctors, the Turkish Medical Association’s (TTB) opinion should have been sought. To begin with, scorning such democratic principles creates this unfortunate outcome.” Turmen added: “With the effort of CHP deputies during the debate of this new legislation at the General Assembly, the government was at least forced to make some revisions for the better.”

The legislation stated, “Those who provide health care without licenses and those unauthorized providing health care, are punishable with one to three years in jail and fined [heavy] legal fees.” The CHP objection led to including the following sentence at the beginning: “In extraordinary circumstances, those who are authorized to conduct their profession will be kept exempt from such restriction while providing first aid and until the authorized emergency medical aid providers arrive at the scene.”

Kursat Bafra of the legal team representing TTB, however, stresses that the attempted modification to the legislation only adds to the confusion as to what may be considered extraordinary circumstances, or how to define the continuity of the medical treatment. More critically, the TTB legal team questions what this new legislation aims to define as “licensed and authorized medical care.”

Incekara, for example, stressed, “To protect public health care, fraudulent doctors should certainly be held legally responsible for their actions. However, Article 25 of law No. 1219 states openly that such fraudulent medical care is punishable by up to five years in prison. Moreover, it is not legally possible to open a doctor’s office without the appropriate license and these are strictly regulated and controlled in Turkey. Therefore the language in the new legislation creates many questions and makes us wonder how the judges will interpret it, especially in the post-Gezi Park era in Turkey.”

Lawyer Bafra concurs. “As a delegation from TTB, we met with President Abdullah Gul on Jan. 9 to explain to him our objection to this bill, and gave him a nine-page, detailed outline as to how to correct those concerning items in the new legislation. The president, however, passed this omnibus bill into law on Jan. 17 without taking into account any of our objections,” Bafra told Al-Monitor. The omnibus bill was published in the Official Gazette on Jan. 20, marking it as the first day of the law taking effect in Turkey.

While Gul stated in September during his visit to the UN General Assembly in New York that he was proud of the initial motives for the Gezi Park protests, because it all began due to people’s environmental concerns, as in developed and democratic countries, the medical community firmly believes that this legislation is aimed at silencing any dissent in the country, and forcing doctors to choose between saving a life and obeying the government order.

“During the Gezi Park protests between May 28 and June 15, we immediately took to the scene, just as we would respond to an earthquake because the police were using disproportionate tear gas, water cannons and rubber bullets, to see whether we could help anyone,” Dr. Ali Ozyurt, TTB Istanbul branch board member, told Al-Monitor. “The police asked us for a list of the people we treated, and the list of those doctors who took care of those injured. We objected and did not give such a list to the authorities.”  Ozyurt stressed that there were more than 7,000 injured across the nation — about 2,000 of them were in Istanbul — and that many protesters were scared to go to hospitals to receive critical medical attention simply because they were afraid of being blacklisted and arrested, since there were numerous cases of this.

“We believe that this new legislation is a reaction to the Gezi Park protests because there was no definition of such a crime before,” Ozyurt told Al-Monitor. “In a sense, the government intimidates medical personnel from providing first aid to those who opposed the government’s view. This may certainly discourage some doctors from volunteering at times like this, and that only risks the public’s well-being.”

CHP deputy Turmen concurs, saying that the government does not care whether its opponents die on the streets during protests: “Remember, the Koc family allowed the doctors to set emergency medical care in their Divan hotel at Taksim. While there was nothing illegal with that action back then, that has now become an illegal act.” Turmen added: “This is a serious ethical issue. This legislation will inevitably force doctors to question and doubt whether they could face any ramifications for treating a person in need. The government certainly had the Gezi Park syndrome in the back of its mind while preparing this legislation, but they should not resent and abhor those who oppose their policies.”

Make no mistake, this obligation for doctors to get official approval before providing emergency care covers all areas of life. “The secretary-general of the World Medical Association [Dr. Otmar Kloiber] frequently travels with Turkish Airlines, and sometimes there is a passenger who needs medical attention in flight. The flight attendants make an announcement asking whether there is a doctor on board,” Ozyurt told Al-Monitor. “[Kloiber] is an anesthesiologist like me, and because of this new licensing issue in the new legislation, he even inquired about our opinion as to whether he could face any legal troubles if he helped a passenger on board.” The point is that the government may not have given thought to the possibility that a licensed anesthesiologist might provide emergency care to someone who may be having a heart attack.

Although the CHP has not yet made its final decision, CHP deputy Riza Turmen told Al-Monitor, “I certainly see a need to appeal this legislation at the Constitutional Court, as it clearly is in conjunction with a number of fundamental rights protected under the Constitution. A government that does not respect the right to life does not respect any thing else. We see how human life has been depreciated here.”