Turkey's health care workers have long asked for government action to curb the verbal and physical assaults they too often face at work, but the government’s latest bill does little to help them. 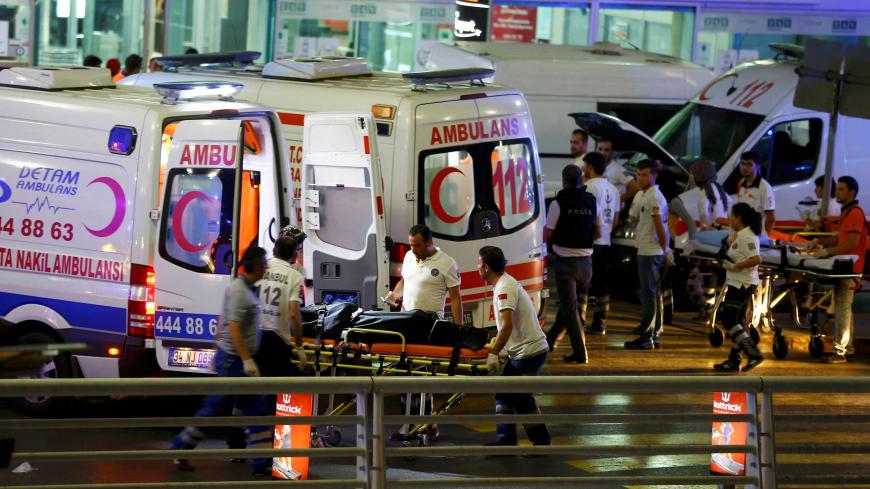 In the pediatrics department of Harran University Hospital, a patient’s father was not satisfied with the answer the doctor provided about his son’s fever. He struck the doctor’s head twice with a stone. The doctor collapsed and was taken to intensive care. This happened in mid-July in the southeastern town of Sanliurfa in Turkey. The assailant told police he does not regret what he did. This is only one of 68,375 cases of verbal and physical abuse of medical personnel in the last six years. According to data from the Turkish Health Ministry, every hour a health staff member is attacked. Verbal abuse is about three times more common than physical.

From early October through the end of November, Al-Monitor conducted phone interviews with over 100 health care employees from three cities (Izmir, Istanbul and Ankara) in Turkey. All medical staff (doctors, dentists, hospital administrators, nurses, pharmacists and interns) told Al-Monitor they believe the actual numbers are much higher than those reported. All of those interviewed have experienced verbal abuse, and 65% of them said the verbal abuse (insults, threats, offensive language) happens on a daily basis. They all concurred that since the 2016 coup attempt, incidents of handguns being brandished at emergency rooms and surgeries have increased. The problem is not a recent one in Turkey, but it has been gradually becoming worse. From 2012 to 2017, violence toward medical staff has increased 168%.

In 2012, AKP government created a system called “White Code” through which health care staff can report attacks to be documented. The data gathered shows the attackers are 70% male, 50% relatives of the patient and 36% the patients themselves.

The reasons for the rise in such attacks over the last decade include a lack of deterrence. For example, 2017 White Code data showed 13,409 incidents were reported. From those reported cases, 57% were prosecuted. So far only 37 have been sentenced to prison and 28 have faced financial penalties. Some of the cases are still under investigation.

Doctors have posted videos as a part of their desperate campaign to raise public awareness about health care workers’ safety concerns. Some doctors claim that the rate that they experience violence is even higher than that of violence against women in Turkey.

Another reason is the AKP government's 2002 “transformation in health care policy.” This policy has led to the privatization of hospitals, where patients are viewed as customers. Most cases of violence take place at state hospitals and emergency rooms, where doctors are overworked and underpaid. The attack in Sanliurfa is one example. At the time of the incident there was one doctor in the city per 1,610 residents and one nurse per 932. First responder numbers are particularly distressing with 56,736 patients to each doctor. All the medical staff except for pharmacists who spoke with Al-Monitor complained of not having enough time to assist patients.

The AKP government’s 16 years of public humiliation of medical staff has not helped. Former Health Minister Recep Akdag made headlines with his various controversial statements about doctors like “The hands of doctors are in patients’ pockets.” While the medical staff was protesting, he said, “Money-hungry doctors are making noise.”

Senel Yediyildiz, an AKP parliamentarian and a medical doctor, appeared on Turkey’s state-funded television channel Nov. 16 and said chief physicians are “not bright” and “deserve to be beaten with a stick.” This kind of derogatory speech by government officials toward white collar professions has become common.

After years of promises to protect health care workers, the AKP recently brought a bill to the parliament with 44 articles. The Turkish Medical Association (TTB) and Turkey's main opposition party raised several complaints over the bill and heated debates followed until Nov. 15, when the bill was finally passed. TTB Chairman Sinan Adiyaman said that the association has been sharing its concerns with members of parliament for over five years, and the bill had only one article that concerns violence against health care professionals. Adiyaman and others were particularly concerned that the proposed legislation asks for prosecution of attackers, but does not propose harsh penalties to deter future violence. One of the requests of the health professionals was that violence against them be considered a public threat because it prevents them from performing their work, putting patients at risk.

It is worth noting that in February, Turkish President Recep Tayyip Erdogan had suggested removing the word “Turkish” from the medical association’s name because it had opposed Turkish military involvement in Syria.

The most controversial article of the proposed bill, Article 5, concerns doctors who were dismissed from their jobs during the state of emergency. It stated that they will not be allowed to work at state hospitals or private entities connected with the social security system — practically all official health care-providing entities in Turkey. The medical reports prepared by these workers would not be considered valid.

If it had passed as written, Article 5 would have meant the dismissal of 5,500 doctors and required security clearances for 1,500 medical school graduates. Given that Turkey has a serious shortage of medical staff, the proposal was not only detrimental to the workers but also against the public interest. The World Medical Association called the proposal “shameful” on Nov. 8 while the TTB worked diligently, writing letters to every member of the parliament to amend the article.

After days of discussion and with some pressure from Nationalist Movement Party members, the article was amended to allow all dismissed personnel to work in private hospitals with or without connections to the social security network. Recent graduates who failed their security clearance will have to wait 450 days before applying for eligibility to work in private entities.

Although it may seem like a win for medical professionals and opposition parties, the fight was a failure on two fronts. Most of the discussion shifted from the safety of healthcare workers to Article 5. This new bill promises little to ensure the physical and mental well-being of health care workers. Also, based on previous experience, the AKP may again push for the original provisions of Article 5. The government has put forward its main goal to dismiss certain members of the medical profession, but the timing may be wrong for now, after the March 2019 municipal elections, worse legislation could be introduced.