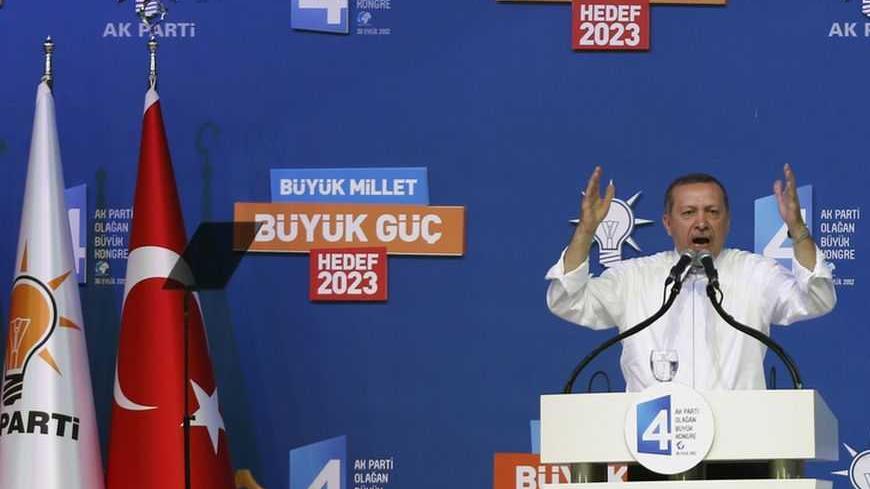 Turkish Prime Minister Recep Tayyip Erdogan, here at the 2012 Justice and Development Party congress in Ankara, is pressuring the Constitutional Reconciliation Committee to finish its work on a new constitution in March. - REUTERS/Murad Sezer

How can something backed by consensus go so wrong? Look no further than to Turkey’s drafting of a new constitution.

Prime Minister Recep Tayyip Erdogan, speaking on Jan. 30 at the weekly meeting of his Justice and Development Party (AKP), told the assembled lawmakers that if the parliamentary commission tasked with drafting the constitution fails to finalize its work by the end of March, “the AK Party will bring its own work on this to the parliament's agenda.” He added, “If there is no compromise, we will submit the new constitution to a referendum.”

The AKP lacks enough votes in the 550-member parliament to put the proposed constitution to a referendum, so Erdogan must simply feel confident that his party continues to receive the support of at least 50% of the nation after a decade in power. The last time Erdogan chose to put constitutional amendments to a referendum, in September 2010, 58% voted in favor. Since that time, although the AKP won the most recent general election with enough of a majority to form a single-party government, it lost seats in the parliament. The party now has 326 seats, which is four shy of what it needs to call a referendum.

That aside, Turkey's opposition parties have sounded the alarm that Erdogan is trying to hijack the country's democracy. Speaking to al-Monitor, Atilla Kart, a member of the Constitutional Reconciliation Committee (CRC) and Republican People's Party (CHP) deputy from Konya, put it this way: “A dictator is attempting to nullify all the work we have done in the past 15 months. People need to react to this in the name of building consensus and peace.”

Kart continued, “The prime minister's remarks reveal once again how distorted his understanding of democracy is. In Turkey, unfortunately, democracy and reconciliation can only be exercised as much as the prime minister permits it. We're calling on the civilian institutions that took part in the initial preparatory process of our commission's work to do their job and speak up at this critical time.”

Providing background on the process, Faruk Bal, Nationalist Movement Party (MHP) deputy for Konya and a CRC member, told Al-Monitor, “Since our first meeting on May 17, 2012, we have gathered 119 times in the last seven months. We discussed 88 articles and agreed on 30 of them. This commission is established on the principle that it determines its own rules, and timeline.” He went on, “When compared to other examples of constitution-writing processes around the world, our commission’s progress is significant. In that context, the prime minister also needs to wait in silence for the natural course of our commission to complete its work in consensus, and he also [should] refrain from politicizing this critical work by attributing deadlines to it and the debates over a presidential system, which only serve to create political frictions.” Erdogan has been pushing vigorously for discarding Turkey’s current parliamentary system in favor of a presidential arrangement.

Altan Tan, a CRC member and Peace and Democracy Party (BDP) deputy for Diyarbakir, also offered his perspective to Al-Monitor. He asserted, “There is no need for the prime minister to wait until March. If he wants to start a fight, and end our commission's work, he should not waste time and do it today.” Tan added jokingly, “We continue to sit at the table, but if we go, we will take the table with us!”

The CRC began drafting the new constitution in May 2012 after a six-month preparatory process during which it engaged the country's key civilian institutions as well as the public at meetings around the country to ascertain expectations surrounding the preamble that will redefine the relationship between the citizen and the state.

The CRC consists of three deputies from each elected party — AKP, BDP, CHP and MHP. The current constitution was written after the last military coup, in 1982, and over the course of nearly 100 revisions, it has become distorted. Most important, people feel alienated from the document, regardless of whether they are secularist or Islamist.

CRC members have thus far failed to reach consensus over the issues key to defining the nation’s soul. That is, they lack unity in defining who is a citizen, and the fiercely disagree over adopting Kurdish as the second official language and allowing the teaching of Kurdish in schools and classes to be taught in it.

Inside Ankara’s beltway, however, there is speculation that the AKP is leaning toward granting Kurds most of what they have asked for from the state. In return, the party hopes Erdogan will pick up the additional four votes in the parliament that would allow him to call a constitutional referendum and later grasp the presidency he desires. The opposition thinks this is easier said than done.

“There is only one reason as to why the prime minister is attempting to end our work,” said the CHP’s Kart. “The representatives of the three opposition parties on the CRC reached a consensus on two key issues: We decided to continue with a parliamentary system and therefore agreed not to discuss issues related to Erdogan's proposal to make Turkey a presidential system. Second, we all agreed to prevent the passage of diverse laws packaged as one. There is no such democracy where the government suggests changing an article in law, but then adds to that package 30 other articles of law or rulings in relation . . . to that one item and leaves the parliament without a tool to select the ones it agrees to and the ones it does not. The AKP has become frustrated with the opposition's unity in the CRC on these issues.”

Tan also expressed his opinion about Erdogan's attempt to rework a law recently passed by the parliament that allows accused persons to defend themselves in Kurdish at courts. Tan told al-Monitor, “The law that was passed in the parliament is called ‘Defense in the Mother Tongue.’ The prime minister says that it's not about defense in a mother tongue, but defense in a language with which one feels better equipped.” He continued, “This is pure demagogy. The prime minister is just trying to please the sentiments of the nationalists. But the people are not stupid. We all understand what he is up to.”

In this context, Tan argued, the CRC's work is not separate from the new peace initiative aimed at resolving the Kurdish issue.  He asserted, "The drafting of Turkey's new constitution, the right granted to Kurds to defend themselves at courts in their mother tongue and all the efforts for democratizing Turkey are not independent of each other, and they all serve to finding a solution to the Kurdish issue. The prime minister's remarks reveal to us that he is not really sincere in this last initiative."

The opposition deputies and others who preferred to remain anonymous relayed to Al-Monitor that they have no doubt that Erdogan will push as hard as he can to switch Turkey from a parliamentary system to a presidential system and do so before August 2014, when the first popular election of the president will be held. “He prefers to be a one-man show, and does not care what others think,” said Tan. “Hopefully he will think hard before pushing the country to the edge. No one can know for certain how streets will react to such pressure after a while.”

Tulin Daloglu is a columnist for Al-Monitor's Turkey Pulse. She has written extensively for various Turkish and American publications, including The New York Times, International Herald Tribune, The Middle East Times, Foreign Policy, The Daily Star (Lebanon) and the SAIS Turkey Analyst Report. She also had a regular column at The Washington Times for almost four years. She tweets from @TurkeyPulse.