Although the Turkish Constitution Reconciliation Commission has stalled in writing a new constitution, no political parties are eager to announce its end. 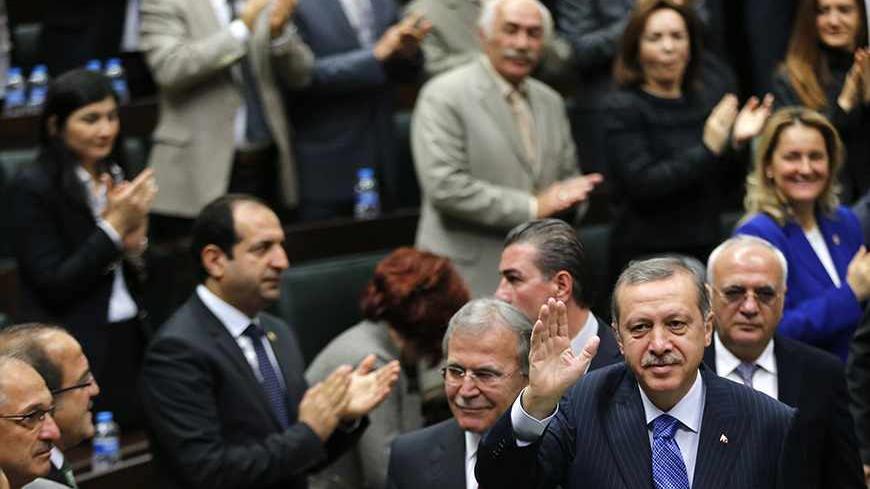 It’s not over until it’s officially pronounced over — and that is the job of the Turkish parliament’s Constitution Reconciliation Commission (CRC). Despite the acknowledgement of a need for a new constitution, all four political parties in parliament and equally represented in this commission have been unable to reach consensus over key issues.

Reacting to this stalled process, Cemil Cicek, speaker of the parliament and CRC chairman, expressed his desire on Nov. 18 to resign, reasoning that he's in disbelief over the commission’s capability to finalize its mission. However, according to the established rules of the commission, Cicek does not have the authority to terminate the CRC’s work. Only the four involved political parties — Justice and Development Party (AKP), Republican People’s Party (CHP), Nationalist Movement Party (MHP) and the pro-Kurdish Peace and Democracy Party (BDP) — can decide on such an ending.

At their Tuesday regular group meeting in parliament, none of the party leaders — certainly including the ruling AKP — announced their withdrawal from the commission. There is still room to push this commission to continue its work, making this momentary downturn just a tactic to force the opposition parties to make concessions. Turkish Prime Minister Recep Tayyip Erdogan was the harshest critic of the commission’s work.

“We won’t be the unconstructive ... When we expressed that civilians could also write a constitution, the opposition walked in the opposite direction,” Erdogan said addressing his group in parliament on Nov. 26. “While this work was supposed to be finalized in 12 months, it’s so far been 25 months ... It was wrong to expect those parties that favored military coups to help write a civilian constitution. These parties that are for the status quo blocked this process. They now say they won’t walk away from the table. What did you do at the table? What does it matter whether you remain at the table or not?”

Erdogan added: “There has only been agreement on 60 articles. We proposed to them to pass these articles into law. The leader of the main opposition party agreed before changing his mind. If one says something, he needs to stand behind his word.”

Kemal Kilicdaroglu, the leader of the CHP, shot back pointedly, arguing that it was the AKP’s insistence on changing the parliamentary system into a presidential one that stalled the commission’s work. "Let them withdraw their proposal on shifting to a presidential system. These 60 agreed articles may become 80 or 90 articles. They say, 'no,'" he said on Nov. 24.

“We want a constitution that prioritizes freedom and democracy. We want a civilian constitution. We sincerely sat at the table with these beliefs in mind. It’s a very important thing that these four parties reached consensus over 60 articles. The [ruling party would] now like to end this commission’s work. When we first sat at the table, we said that you will see that the AKP is not sincere, they will be the first to leave the table. And that is what they do today,” said Kilicdaroglu. “Cemil Cicek should not act as the man of the ruling party in the commission. He is the speaker of the parliament [which requires him to stay neutral on such issues].”

MHP Chairman Devlet Bahceli was no different. “It does not matter whether Cemil Cicek would like to resign from his post. AKP is trying to find excuses to withdraw from the table,” he said on Nov. 26, addressing his group in parliament. “I cannot speak for the other members of the commission, but I know the MHP members of this commission will stay on their work with the full belief of being able to write a constitution. MHP won’t be the side to withdraw from the table and won’t lose its hope of making a civilian constitution. Even without Cicek's presence, the CRC can continue its work, and none of the parties openly expressed a decision to withdraw from the commission. It’s only the AKP that is in search of an excuse to do that. In that light, the prime minister and his party need to decide whether they would like to stay or leave this commission.”

Gultan Kisanak, BDP co-chairwoman, chose to blame the other three parties, placing the crucial responsibility on the shoulders of the ruling party. “AKP wanted to use that table to make its own desired constitution happen. CHP took a position proposing things behind its posturing on the streets on issues concerning social democrats. CHP and MHP are responsible for today’s circumstances, but the heaviest responsibility lies with the AKP,” she said. “All these parties tried to maximize their own interests in the past two years while abusing people’s hopes and expectations for this civilian constitution. Their issue is not about making a new, free, civilian constitution. They spent their time focusing on how to benefit their party’s agenda.”

In this light, it can only be fair to consider the election timeline when thinking about the longevity of this commission. In the 2009 elections for local administrators, AKP received 40.11% of nationwide votes. The next local election is in March 2014. If the AKP increases its votes, the party may still continue its push to change the parliamentary system into a presidential one. After all, a strengthened AKP will be confident taking its constitutional proposal to a referendum, even before the August 2014 presidential election in which the country’s next president will be determined by a public vote for the first time.

It’s no secret that Erdogan would like to be the next president, but the AKP is uncertain. In today’s system, the president can be elected by a majority of the nationwide vote. A local election that strengthens the AKP vote can only affirm that Erdogan will get what he wants. A weaker turnout in local elections can only affirm that he won’t be able to walk the walk until the end, as he had originally calculated.

To sum up, the election timetable, coupled with the upcoming general election in 2015, needs to be configured into the AKP's decision on whether it decides to stay or leave the CRC work.