The Coming Political Crisis in Turkey 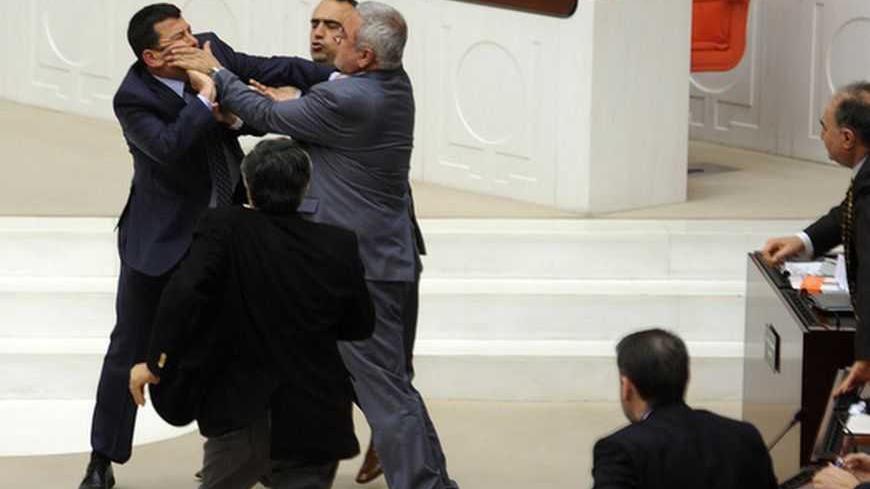 Members of parliament from the ruling AKP party and the CHP party scuffle during a debate at the parliament in Ankara, March 30, 2012. - REUTERS/Stringer

The first day of 2013 is offering clues as to what will keep Turkey busy this year. The priority appears to be the work on a new constitution. Most likely Turkey won’t be able to introduce a new constitution and the ruling Justice and Development Party [AKP] will try to impose a constitutional draft that provides for an empowered president, fulfilling Prime Minister Recep Tayyip Erdogan’s aspirations for the 2014 elections. Other parties will resist and Turkey will thus move into 2013 with symptoms of a political crisis.

The first clue to how 2013 will start came from a statement on the last day of 2012, when the Parliamentary Speaker Cemil Cicek announced that he will be meeting with the main opposition leader Kemal Kilicdaroglu on Jan. 2.

Dec. 31 was the last day for the Constitutional Preparatory Commission, made up of three representatives from each of four political parties represented in the parliament. This Commission was established before the 2011 elections to draft a new constitution. Although the Commission worked hard and well, primarily thanks to the efforts of Speaker Cicek, after one and a half years of work there is not much to show.

The Constitutional Preparatory Commission at the outset adopted the principle requiring that all constitutional articles must be approved by consensus of four parties. They were  move forward after agreeing on an article, setting aside articles lacking consensus to be dealt with later.

In Turkish political culture, reconciliation is not much practiced. “Concession” is a pejorative word that almost means “treachery” in the Turkish political lexicon. That the new constitution would define the legal framework for a solution of the Kurdish issue needed a miracle, given the divergences between the Peace and Democracy Party, which is on the same wavelength with the PKK, and the stalwart nationalist opposition National Movement Party, which refuses to acknowledge a Kurdish issue and insists that Turkey faces terror and treason. The miracle would have been for these parties to reconcile especially on definition of citizenship, mother tongue education and decentralized governance which could truly form a basis for the resolution of the Kurdish issue. The miracle did not happen.

Interestingly, while drafting the new constitution, the main opposition CHP in many instances had positions close to MHP, while the BDP appeared to be closer to AKP’s views. Turkey is a country where parties labeled as “left” lose their distinction from rightist-nationalist parties when the issue on hand is about the nationalism aspects of the Kurdish issue.

At the end, consensus was achieved on a few and minor articles of the draft, without making progress on the vital constitutional articles. The mandate of the Constitutional Preparatory Commission thus expired.

In 2013, the speaker of the Parliament wants to declare “extra time” to be played. If not, 2013 would be starting with a political crisis. Prime Minister Erdogan won’t want to waste the year when in 2014 Turkey will have local elections and the first ever direct vote election of its President. Erdogan needs a new constitution more than anyone else to equip himself with additional powers as the President.

It wasn’t a surprise when in the last days of 2012 he said if the parties cannot agree on a new constitution, AKP will introduce its own draft.

Since political parties that could not even agree on definition of citizenship in one a half years cannot be expected to agree on an entire constitution, Erdogan will go ahead and introduce his party’s draft constitution.

The Turkish National Assembly, with 550 representatives, needs 367 votes to amend or to replace the constitution without submitting it to a referendum. Any vote total between 330 and 367 requires going to a referendum.

AKP has a few seats less than 330. In such a situation, for AKP to call for a referendum to approve its own constitutional draft it has to make a deal with CHP or MHP to find 330 seats. AKP’s other option would be lure a few representatives from other political parties to join the AKP.

The first option means stiff horse trading between the AKP and the other side, and heavy concessions by AKP. This hasn’t been really well-practiced in Turkey. Opposition parties, whether CHP and MHP, knowing that Erdogan is desperate to be become the president and transform it into a single-ruler authoritarian regime, are not likely to offer a new year gift to Erdogan.

The second option of luring representatives from other parties will bring to mind the unethical “representative bazaar,” or in other words, “markets to purchase representatives” that were set up not all that long ago. This in itself will be a major crisis.

We can easily predict that 2013 will be transition year of political land mines towards the 2014 presidential elections. To move safely through it, Erdogan has to rely of his luck that served him well in his 10-year rule and his political skills.

Now, at the beginning of 2013, the impression he gives is that nobody could divert him from his targets. But, perhaps 2013 will the year when the “metal fatigue” of Erdogan will be revealed for all to see.

Erdogan became the prime minister in March 2003. Since’s Turkey’s transition to democracy in 1950, only Adman Menderes occupied the seat of the prime minister for ten successive years. His rule ended with the first military coup of 1960 and Menderes was hanged in 1961 after a shameful trial.

Of course, such an end for Erdogan is unthinkable in 2013. During his 10 year reign, Erdogan’s most significant contribution to Turkey, among others, has been his success in sending the army back to its barracks.

Erdogan needs only a few more months to make history by breaking the record of Adman Menderes. No doubt, he will break the record. But will the erosion of 10 years of rule, in other words, “metal fatigue” allow him to move in 2013 towards his goals of 2014?

We will find out the answer in 2013 that will be inaugurated with a political crisis.

Cengiz Çandar is a contributing writer for Al-Monitor's Turkey Pulse. A journalist since 1976, he is the author of seven books in the Turkish language, mainly on Middle East issues, including the best-seller Mesopotamia Express: A Journey in History. He contributed to two Century Foundation publications: "Turkey's Transformation and American Policy" and "Allies in Need: Turkey and the US." He is currently senior columnist of Radikal in Istanbul. Candar was a special foreign policy advisor to Turkish President Turgut Özal from 1991 to 1993.