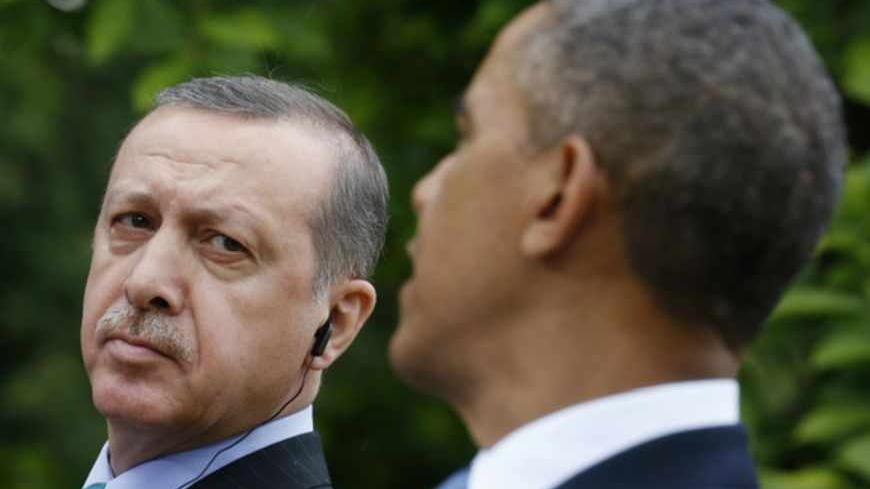 Prime Minister Recep Tayyip Erdogan is a master of spinning the political agenda with unexpected remarks and moves. His visit to Washington last week was not limited to Syria, Iraq, energy and bilateral trade. It produced also strong clues about the roadmap of domestic politics for the next two to three years.

Even though attention is focused on the delicate Syrian crisis and the fragile Kurdish peace process, it is obvious that a new constitution, reforms, systematic far-reaching changes, a new presidential system model and the remolding of the powerful Justice and Development Party (AKP) are the essential issues.

The reason lies in the three elections — municipal, presidential and parliamentarian — squeezed into 2014-2015, which will shape Turkey’s course in the runup to its centennial in 2023.

On his way back from the US, Erdogan spilled the beans in an elaborate answer to questions about efforts to draft a new constitution: “I’m also losing hope. If the effort fails, we’ll activate plan C and submit our own draft. We have 326 lawmakers. You know, the vote will be secret. Some brave souls might back the draft despite the pressure of their own parties. If we muster the required majority, we could go to a referendum. There might be three elections in 2014.”

Erdogan, in short, says: My patience is running out. The four-party constitution-drafting commission will fail to reach a consensus. Let alone all four parties, not even three can agree on a common ground. Therefore, we will draw up our own draft and bring it to parliament — whether the Kurdish Peace and Democracy Party (BDP) likes it or not. We are short of the 367 votes required for an automatic approval of the draft in the 550-seat parliament. At least 330 votes are needed to put it on a referendum, but we have 326 lawmakers. The law requires the vote to be secret. So, if five brave lawmakers from other parties extend support, we can take the draft to a referendum. In that case, we can bring forward the national elections from 2015 to 2014.

Erdogan means that no matter what the opposition says, his party will move forward politically, step by step.

According to the Kemalist main opposition Republican People’s Party (CHP), Erdogan is devising tactics to evade the issue of the constitution. The far-right Nationalist Movement Party (MHP) believes he is trying to blackmail the opposition in the constitution process. The BDP insists on reforms and a new constitution before the elections.

Some other remarks Erdogan made on his way back from the US bear significance. He said that if the cross-party commission reaches a consensus against all odds, the new constitution could be approved by majority vote in parliament by the end of 2013.

And what if not? “It won’t be the end of the world. We will continue to serve under the current constitution,” Erdogan told journalists on his plane.

An action plan has obviously taken shape in Erdogan’s mind. AKP deputy chair and party spokesman Huseyin Celik gave another clue two days ago, suggesting that all calculations are intended to make sure that the draft reaches the referendum stage.

“When a draft goes to a referendum, it ceases to be the product of this or that party. When approved by the people, it becomes the constitution of the nation. This is what the prime minister has always said. If we come up with signs and findings suggesting a favorable ground, if we come to believe we can pass it from parliament, we’ll go ahead,” Celik said.

So, what is going to happen? What is in and beyond plan C?

Erdogan appears to be playing a great gamble. First of all, the Kurdish peace process is serving as a major “play-making” element. If the process succeeds, popular support for the constitution will grow (a successful outcome could even open the door to an apology over the 1915 Armenian massacres). Plan C contains also the objective of luring the Kurdish political movement and its voters into a constitution-centered play.

But the plan’s essential aim is to push to the hilt for a brand new presidential system. Erdogan will use all his trump cards and refuse to give up before he knows he has exhausted all means. The Kurds, Erdogan’s only politically fanged rivals, are likely to refuse to “sell out” and squander democratization for a presidential system. Given the CHP’s tiresome identity crisis, bargaining with the Kurds could seal the country’s fate.

If plan C means a constitution process driven by the AKP but marred by controversy, then two scenarios emerge.

The first entails a happy end for the AKP: partial constitutional changes by year-end, municipal elections in March, in case of electoral success — a combination of moves including a new push for a presidential system, then a double vote in the summer of 2014 merging early general and presidential polls. This is roughly Erdogan’s game plan. The country may well end up with a “freak” constitution creating new problems since no one is currently familiar with the content.

The second scenario is the one that is “not the end of the world.” If the BDP refuses to make a deal with the AKP and disables the option of a presidential system, Erdogan may stand in the elections on the basis of a kind of a semi-presidential design with reinforced powers and preserving party allegiances as in France. His victory seems almost certain. Thus, he would continue on his way as a leader running the government by remote control.

For those who wonder why Erdogan took Numan Kurtulmus to the White House even though the latter is not even an MP, many answers are concealed here. In Erdogan’s mind, Kurtulmus is the best candidate for prime minister. He is of good formation, familiar with the US and in good command of both language and ideology. This, too, is part of plan C, though it may be bad news for Foreign Minister Ahmet Davutoglu and others.

Gambling boldly, Erdogan is poised for a game in which any change he secures will count as a gain. The PKK peace process and Syria represent the risks. Anything else is in his favor. No one can stop him if he manages to skillfully lure the Kurds to his side, refraining from excess, that is, from insisting on a presidential system. His main helper in the race is the statist opposition, which fails or refuses to decipher him.

Luck continues to be Erdogan’s most faithful friend.