Is Turkey-PKK Peace Process At a Dead End?

The Sept. 1 deadline for the second stage in the Kurdish peace process is about to expire, without progress. 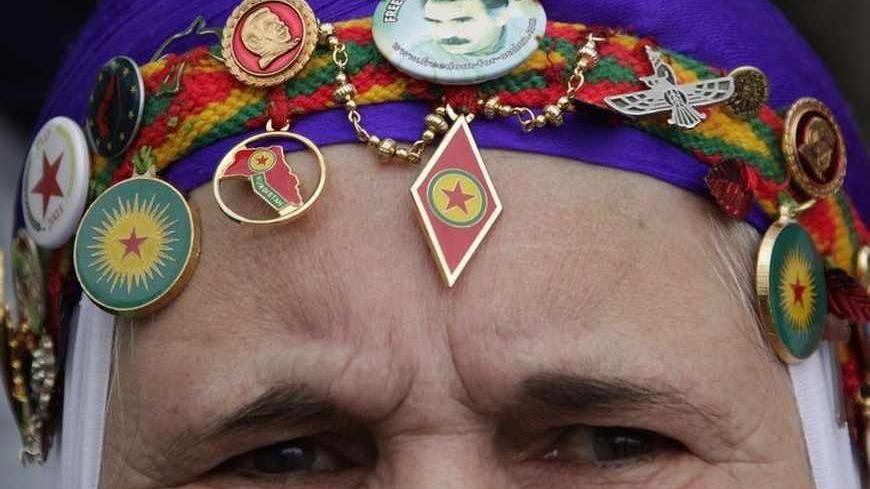 A Kurdish woman demonstrates against the conditions of detention of jailed Kurdistan Workers Party (PKK) leader Abdullah Ocalan during a protest in Strasbourg, April 4, 2012. - REUTERS/Vincent Kessler

Dark clouds are gathering in Turkey over the Kurdish peace process, which is key to the future of the country’s fragile politics. Although talks between the two sides may be ongoing, and at a snail’s pace, mounting regional tensions, the “state of war” looming over Turkey and the disheartening state of the parliamentary effort to draft a new constitution are all deepening misgivings. Will looming fears be realized?

The Kurdistan Workers Party (PKK) and the Peace and Democracy Party (BDP) have greatly increased their pressure on the government over the past several weeks. The first of the three stages of the peace process entailed the PKK militants’ withdrawal from Turkish territory, and this has put the PKK-BDP alliance and the Justice and Development Party (AKP) at loggerheads. While the former asserts that the withdrawal is almost complete, Ankara maintains that “only 20%” of the militants have pulled out. The standoff is a clear indication that after months of talks, the two sides still lack mutual trust, which is a prerequisite for success.

The immediate issue is PKK leader Abdullah Ocalan’s ultimatum to the government to “announce the reform plan, required for the second stage, by Sept. 1 and start implementing it by Oct. 15” as well as his appeal for the formation of parliamentary commissions to “contribute to the process.” The clock is ticking, but the government appears to be doing nothing.

Meanwhile, the PKK’s military wing is toughening its rhetoric. Cemil Bayik, a top PKK figure based in Iraqi Kurdistan, has warned, “The process is about to collapse.” In an interview with the BBC’s Turkish service, Bayik said, “We’ve amply fulfilled what was up to us. [But] the process cannot go on like this. The state has brought the process to the brink of a deadlock. We’ve warned them not to waste the process. The second stage should be completed by October.”

According to Bayik, the government of Prime Minister Recep Tayyip Erdogan only intends to use the process as a tactic. He asserted, “They want to sacrifice the process to the elections. …They were supposed to open the way for democratic politics. None of this has been done. … A third party should be involved in the meetings and the negotiations. But they won’t let it happen. They don’t put the talks on paper, with seals and signatures, and therefore, Turkey is able to deny everything. There is no third party to attest the talks. There are no signed papers. They treat him [Ocalan] tactically in a bid to gain time.”

With time running out, the resulting anxiety has prompted some action. Last week, 258 scholars from various universities issued a declaration calling on the government to take urgent steps. “The fact that the government shies away from informing the public about the process, with all information about developments coming solely from BDP lawmakers and members of the [PKK-linked] Group of Communities in Kurdistan (KCK), signals that the settlement process is not moving forward as expected,” the declaration held.

“Academic research indicates that half of peace processes around the world collapse in the first five years, mostly because governments fail to deliver the promises they make during negotiations. … At a time when the entire Middle East is in the grips of war and with nearly 50,000 citizens dead in more than 30 years of conflict, Turkey has no luxury for another trial and error in this process,” it concluded.

In parliament, meanwhile, the commission at work on drafting a new, civilian constitution, an endeavor directly related to the peace process, is also far from producing encouraging results.

At recent discussions on the first four articles, the most crucial part of the job, the commission failed to reach consensus on issues of language and education in mother tongues.

One of the most critical points pertains to how Article 3 in the existing constitution is to be amended. The article, imposed by military rulers after the coup in 1980, contains the following provision: “The State of Turkey, with its territory and nation, is an indivisible entity. Its language is Turkish.” The commission had been expected to agree to scrap the first sentence and modify the description of Turkish as “the official language,” at the least.

The commission’s AKP members, however, have now stepped back, with the Nationalist Movement Party (MHP) and the Kemalist Republican People’s Party (CHP) agreeing to retain the provision unchanged. The BDP was left alone in opposing their position. The three parties also agreed in opposing a constitutional guarantee of education in a mother tongue.

Such moves obviously are not encouraging for furthering the peace process. Political instruments on the parliamentary and governmental levels are operating in favor of proponents of the status quo.

Even if the government moves urgently to unveil a reform program, the overwhelming expectation is that it will include nothing about education in a mother tongue or a political amnesty. The so-called reform package would, therefore, be stillborn.

Altan Tan, a BDP member of the constitution-drafting commission known for his straightforward style, has noted the delaying tactics further fueling the climate of mistrust. “What is basically being whispered to Kurdish ears is this: ‘Let the three [upcoming] elections pass, and then we will issue a general amnesty or change the political climate somehow. The Ergenekon prisoners, Ocalan, Kurdish political prisoners, … they will all walk free. You save us now, help us make Erdogan a president, and then we’ll save you.’ This is what people keep writing about. This is what is being whispered in the ears. And it’s utterly unacceptable in terms of political morals and ethics,” Tan told Today's Zaman.

The government has not yet issued a clarifying statement, but in remarks to Hurriyet on Aug. 30, Justice Minister Sadullah Ergin denied that the process is “being sacrificed to tactical moves.” Argued Ergin, “The peace process is not a maneuver for the elections. If we run into trouble, we’ll pick up where we left off. We are focused on the job. There is no reason for panic. The effort we call ‘the peace process’ is a government policy. Proposals could well be put on the table and then a timetable could be discussed on how we meet those proposals. Disagreements on various issues are not important. … What we are trying to do is not conditioned on a deadline of elections. We are building a forward-looking legal infrastructure. Our direction is clear.”

What is the government’s real intent? Many analysts equate the “government” with the prime minister and draw tactical links between next year’s municipal, general and presidential elections. If the links do exist, Erdogan has three very critical options: give a bold green light to the peace process by taking a series of quick steps in autumn; suspend the process on the ground of a possible “state of war” in Syria; or maintain his current attitude and follow a rather ambiguous “slow-motion timetable.”

The last option is the most likely one. Yet, the PKK and the BDP will have to be convinced to accept the AKP’s argument that “circumstances allow only so much.”

Is that possible? The decision is up to Ocalan. The anticipation of peace in Turkey is high, but the pace is accelerated at which regional factors bearing on the Kurds are spiraling out of control. There is plenty of reason for concern.
Yavuz Baydar is a contributing writer for Al-Monitor's Turkey Pulse. A journalist since 1979, he has been a radio reporter, news presenter, producer, TV host, foreign correspondent, debater and, in recent years, a news ombudsmen for the daily Sabah. His opinion pieces can be followed in the English-language daily Today's Zaman.