The deadlock in the Turkish parliament does not come as a surprise and may foreshadow even more polarization. 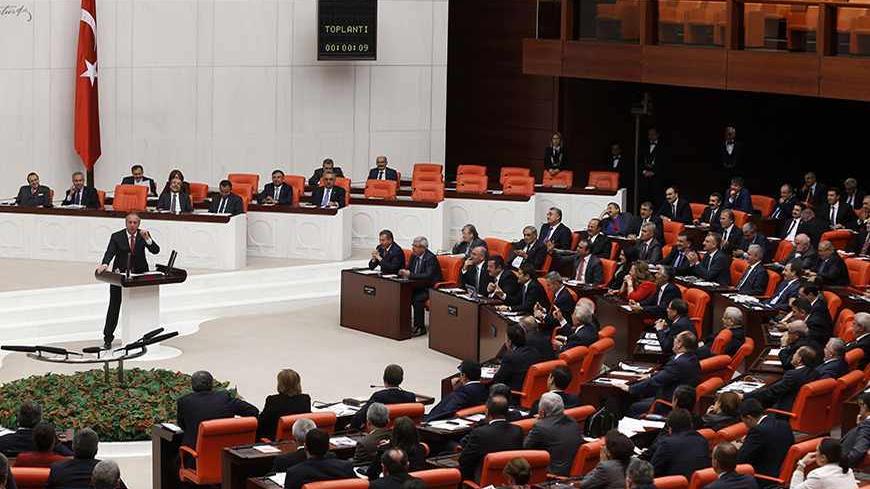 After more than two years of intense work, Turkey's hopes for a civilian constitution have been declared dead, ready to be buried.

The announcement, coming from various parts of the so-called Conciliation Commission, brings new doubts to the fore about the future of the country's dragging, slow-motion democratization process, for it raises new questions on whether or not there are any options left for a badly needed social contract.

Concerns are, with no progress noted, Turkey's wide-open Pandora's box may lead to sharper polarization and even riskier domestic tension.

The final deadlock in parliament came as a surprise to no one. In the past six months or so, the commission turned into a scene for daily tactics among the four parties which constitute it, and signs of a cul-de-sac became clear when the ruling Justice and Development Party (AKP) insisted on the amendment which it hoped would empower the president — following the elections in August 2014 — as the head of the political executive.

Meanwhile, the main opposition Republican People's Party (CHP), attempted to use the work as a tactical tool to bargain for the release of its jailed deputies. Extreme-right Nationalist Movement Party (MHP) mainly fought to maintain the main tenets of the 1980s' military-dictated constitution, while the pro-Kurdish Peace and Democracy Party (BDP) tried to push for a number of radical amendments, which it argued was necessary to finalize the ongoing Kurdish peace process, based on negotiations between the government and the Kurdistan Workers Party (PKK).

Lately, the commission concluded that on less than half of the draft, on 60 articles, it had reached a consensus. Yet, the four parties noted zero progress on the most critical of them — only underlining opposite views on its utterly nationalistic preamble, on the first four articles describing the nature of the republic, on education in mother's tongue and decentralization of power.

After a long meeting on Monday, the head of the commission, Parliament Speaker Cemil Cicek, made clear that he did not believe the commission would come up with a new constitution, that failure was a fact. Following his announcement, the AKP said it had pulled out of the commission for good.

"I believe today they decided there was the need to unplug a commission which had survived on artificial respiration," Deputy Prime Minister Bulent Arinc told reporters after a weekly cabinet meeting, blaming the panel's opposition members. "I think Turkey has lost a lot. We had very good intentions, but those who could not get out of daily political fights did not allow us to draft a new constitution," he said.

Atilla Kart, a member of the commission from the of the CHP countered, “Since the AKP did not dare dissolve the commission by itself, it did so via the parliament speaker in a de facto way.”

Pro-Kurdish BDP's Bengi Yildiz claimed the AKP made the parliament speaker dissolve the commission because the party wanted to avoid being held accountable by the people over the failure to come up with a new charter. Another BDP deputy, Altan Tan, said the AKP gave up because it did not want to deal with the new constitution issue when it has more important agenda items like the local, presidential and general elections.

Prime Minister Recep Tayyip Erdogan told the AKP deputies in parliament on Tuesday that the speaker "had run out of patience" and added: "Now we are waiting for his letter. We will see what information he will give us and what requests he will make.”

But the AKP seems to have made its decision already. It is ready to survive the blame game of the oppositon by referring to Cicek.

What is next? Another member of the commission from the AKP, Mustafa Sentop said that his party would seek agreement with one or two parties to make a partial amendment on 60 articles, but was quick to add that this was not likely in the pre-election period but could be revisited after the 2015 general elections.

This means an even wider open political ground for sheer tactics, and a grand loss for Turkey's democratic objectives, not only crucial for its historic closure, but also regionally and globally.

There are some immediate points to be made. The collapse of the draft commission will pave way for a nasty period, in which the country will go through three critical, consecutive elections. The current freeze means a victory for both opposition parties, CHP and MHP, which were widely perceived as filibustering in favor of preserving Turkey's anachronistic, anti-democratic constitution, which stands between the country and its prospects to be a full member of the EU. It may also, in all likelihood, sow seeds of discouragement for the Kurdish peace process, which had raised Kurds' expectations for a ground reform on diversity, ethnic identity and devolution. Alevis, non-Muslims and other social groups also may see their patience tested, as one tiresome tactical game in politics follows another. It may also fertilize the ground for technical legal setbacks for passing even minor reforms, which the opposition can claim as unconstitutional.

Yet, some options — albeit weak ones — remain open. The AKP can force the pace by presenting its own draft, for which it lacks a necessary majority in parliament, but hopes that it is backed nevertheless. The second option is a new set of talks — for patchy amendments — with the main opposition, CHP. But the latter seems more reluctant than ever to be dragged into what it will see as tactical traps. Any cooperation between the AKP and BDP seems even far less an option since it may prove costly for Erdogan if he pursues his dreams to be the next president of Turkey, for which he needs, at least, more than 50% of votes.

For further repercussions of this critical turning point, we will simply watch  — and wait.