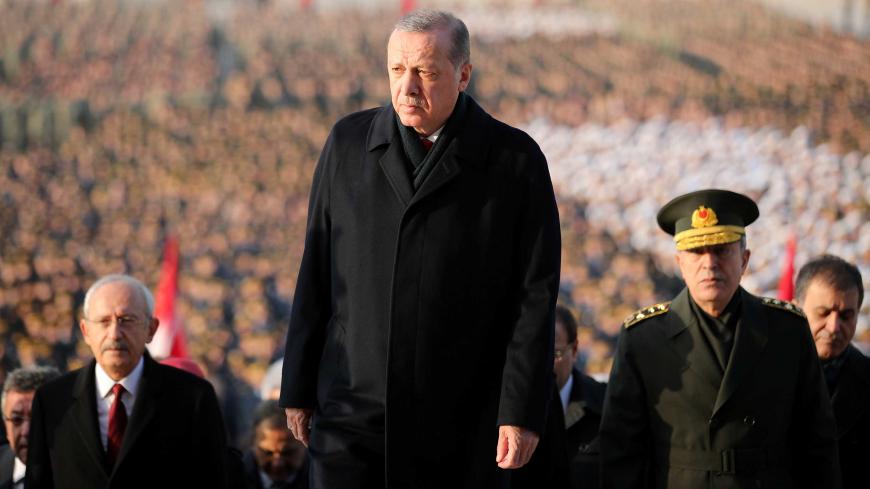 Turkish President Recep Tayyip Erdogan recently rejected the use of a high school entrance exam his own party introduced with great fanfare just a few years ago. Now a new version has been launched, to a much less enthusiastic reception.

During a live TV interview Sept. 16, Erdogan said, “The high school entrance exam [commonly known by the acronym TEOG in Turkish] must be abolished. I don't want that system. It will be abolished now.” Ironically, it was Erdogan’s Justice and Development Party (AKP) that introduced the TEOG exam in the 2013-2014 school year.

TEOG was advertised with the promise that it would advance high school education and help promote the spread of Imam Hatip (religious) high schools (IHL). During that school year, the percentage of IHLs did increase, to 19.9%, up from 11.8%.

This year, on Nov. 5, a new entrance system was unveiled. Oddly, the new system resembles the one used before the AKP’s TEOG. Students wishing to qualify for the top schools will have to take the entrance exam, and only 300,000 are expected to be accepted, according to Education Minister Ismet Yilmaz. To put that into perspective, 1.2 million students will graduate from eighth grade in 2018. Yilmaz’s words caused an uproar among Turkish parents.

During his 16 years holding national public offices, Erdogan has yearned for a “pious generation,” and Turkey’s schools have turned into testing grounds, with annual tweaks to the system and the curriculum. Erdogan has even asked college professors to run IHLs, while other members of his family, such as his son, Bilal Erdogan, recently made the headlines questioning the influence of the "sinister West" on Turkish minds. Young Erdogan argued that the Western lifestyle is an attempt to enslave Turks.

Yet most of the news from the AKP-introduced pious education system has been less than promising: In 2017, only one in five IHL graduates was able to pass the university entrance exam. Indeed, not only students but also prospective teachers are struggling with their standardized tests. For example, in August, prospective teachers on average could only answer 30% of the questions correctly. The correct answer average for high school math teachers was 11 out of 50, raising alarm bells for administrators and the public. In addition, more than 2,000 teachers have been dismissed due to political reasons after the botched coup in July 2015.

In 2015, the Program for International Student Assessment results showed that Turkish students had the lowest level of satisfaction with their education system among Organization for Economic Cooperation and Development countries. Students’ academic scores have regressed significantly in all three areas of testing: math, reading and science.

While academic standards have deteriorated, Erdogan’s pious generation is also growing up with significant anxiety. Not a day passes without mind-boggling news about child martyrdom or other blood-spilling, harrowing incidents emerging from Turkey’s K-12 education system. On Oct. 31, news from Izmir province reported fifth- and sixth-grade students were informing their parents of their desire to die before they have accumulated too many sins to enter paradise. Parents were surprised to hear their children’s willingness to commit suicide to show their religious adoration and obedience.

There have been other reported incidents in which students as young as 2 years old were provided religious values education at government-funded preschools. In one case, teachers told young students, “If your mother fails to cover her hair, hell fires await her,” and several students broke down in tears. The impact of twisted religiosity goes from preschool to college. For instance, on Nov. 1, news broke that Karamanoglu Mehmetbey University had posted an employment ad seeking an educator able to "fight the devil" under the guidance of the Quran. After a public uproar, the ad disappeared from the college’s website.

Erdogan’s dream of raising a pious generation has backfired. The highest percentage of political opposition came from voters aged 18-24 during the April 16 referendum that granted the president unprecedented powers.

To put all these reports in perspective, Bekir Agirdir, the director of Konda Research and Consultancy, provided interesting information based on recent research. The research is unpublished, but Agirdir shared a few striking results. According to Konda, about 25% of the youth surveyed believe “luck and cronyism” are necessary to land a job. When asked about the AKP’s recent curriculum changes, only 26% approved. Even among those parents whose kids attend IHL schools, the approval rates were below 50%. Agirdir explains that this is a stark change. Between 2002 and 2007, the AKP made important headway and the public was both pleased and hopeful about education. Yet, since then, education under the AKP has regressed significantly. Agirdir said, “If in a country one in every three people declare their wish to live abroad if they could, and three-fourths say they would send their children abroad for education if they could afford it, we're talking about a picture worse than a firm’s bankruptcy.”

Al-Monitor conducted one-on-one interviews with 54 families who have students who either currently attend or graduated within the past two years from IHL schools in Ankara, Istanbul and Izmir provinces. These families were deliberately chosen because they are registered AKP member households. In these interviews, more than 55% of respondents answered affirmatively to three statements.

The first of these statements was “Our children are less enthusiastic about practicing Islam since becoming IHL students.” Of all respondents, 73% said students come home with conflicting religious information. They are unable to learn Arabic or do well in their lessons about the Quran and Hadith (the sayings of Muhammad).

For the second statement, 68% agreed: “Our children’s chances of getting into college are worse because they are IHL students.” Families were quite disappointed that they have to pay private tutors and yet the students still struggle, particularly with math and science.

On the third statement, 55% of respondents said, “Except for gender separation, IHL education would not be my first choice for my younger kids.” The parents of sons, in particular, would rather send their kids to “regular” schools, though parents of female students did find value in IHL women-only classes. This is a crucial concern for a significant number of families.

Out of the 54 families, 52 asked Al-Monitor during their interviews about opportunities to study in the United States.

Some 93% of the youth, though describing themselves as observant Muslims, told Al-Monitor they haven't done any sort of volunteering or community service and could not recall a time when they helped someone outside their family. Indeed, the 2016 Global Youth Development Index and Report ranked the participation of Turkish youth in civic activities at 177 out of 183 countries. Civic participation, according to the report, is a measure of the extent to which youth "interact positively with their communities.” The report defined "youth" as people between 15 and 29.

Erdogan’s dream of raising a pious generation has backfired. The highest percentage of political opposition came from voters aged 18-24 during the April 16 referendum that granted the president unprecedented powers. These are the voters Erdogan has invested in heavily through youth programs in the past 15 years. A research report by the Islamist Felicity (Saadet) Party’s youth branch refers to the AKP’s youth policies as “patchwork politics” and indicates how disappointing the policies have been. According to the report, only 15% of the Turkish youth describe themselves as traditionalist, while 10% say they are modernist and the remaining 75% describe themselves as neither.

Repeated failures in the education system are reflected in real numbers. Youth unemployment, according to government sources, has persistently increased since 2005, reaching 24.5% in 2017. Middle and lower classes are worried about paying off debts, saving for marriage and staying out of the military. Erdogan's dream of a generation of pious, patriotic youth is not to be: Since 2015, more than 155,000 people have avoided military service citing health reasons, a significant increase over earlier years, according to the Ministry of Defense.

Erdogan now understands he cannot ride on the votes of the "pious generation" he has invested in and tried to cultivate for more than a decade. This may well explain his unexpected turnabout and sudden love for the founder of Turkey, Mustafa Kemal Ataturk, who is a symbol of secularism.