The road to rebuilding Raqqa

The city of Raqqa, newly liberated from the Islamic State by the Kurdish-led and US-supported Syrian Democratic Forces, will now face the challenges of reconstruction and uprooting the jihadi threat once and for all. 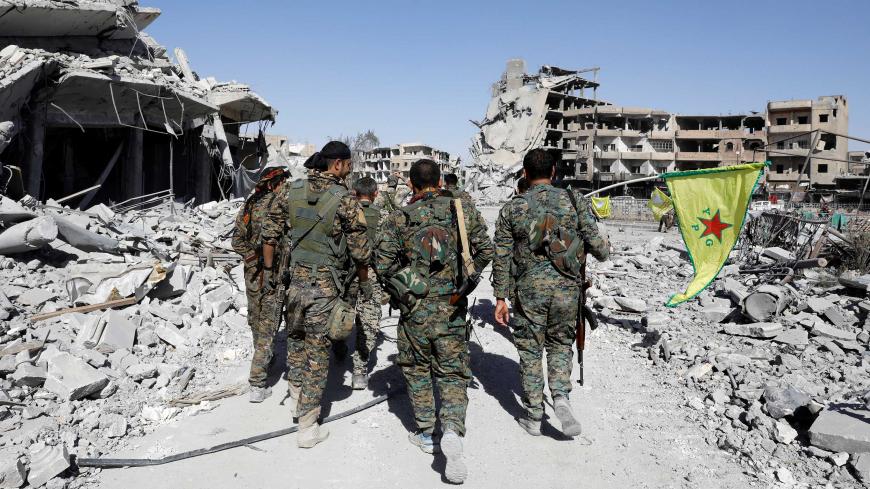 Members of the Syrian Democratic Forces walk past the ruins of destroyed buildings near the National Hospital following Raqqa's liberation from the Islamic State, Raqqa, Syria, Oct. 17, 2017.

With the city of Deir ez-Zor falling into the hands of the Assad regime army and allied forces Nov. 3, the city of Raqqa — newly liberated from the Islamic State (IS) by the Kurdish-led and US-supported Syrian Democratic Forces (SDF) — finds itself at a turning point. Surrounded by regional and local enemies with diverging geopolitical interests, Raqqa’s elites have to carefully navigate ethnic lines while tackling a difficult reconstruction effort and uprooting the jihadi threat once and for all.

With IS nearly eradicated in Syria, Raqqa will be facing an increasingly complex environment emerging in the post-IS phase.

After all, the governorate is surrounded by either hostile or unreliable regional players, such as Turkey, the Syrian regime and Iraqi Kurdistan, said Fabrice Balanche, a Syria expert working at the Hoover Institution.

Turkey sees the expansion of the SDF territory in Syria as a direct threat to its national interest and will keep on isolating Syria’s north as a result. The SDF is backed by the Kurdish Democratic Union Party (PYD). The PYD is the Syrian branch of the Kurdistan Workers Party, which has fought a long insurgency against the Ankara government.

In a recent article, journalist Wladimir van Wilgenburg, who was in Raqqa, reported that the Syrian regime was trying to convince some Arab tribes to help pave the way for their return to SDF-controlled areas. The Syrian observer also reported that the regime of Syrian President Bashar al-Assad has proposed giving the PYD in Syria autonomous “self-rule” in the country’s north in exchange for withdrawing its forces from majority Arab areas during a meeting held by Syrian security chief Gen. Ali Mamlouk with officials from the PYD.

Iraqi Kurdistan is not necessarily a reliable partner for the Raqqa political elite. The Kurdistan Region appears to be entering a new and uncertain period with the announcement Oct. 29 by Massoud Barzani of his resignation as the region’s president, in the wake of a controversial vote on independence.

The battle of wills between the Kurdistan Regional Government and Baghdad led to advances by the Iraqi armed forces and pro-Iranian Popular Mobilization Units (PMU) forces in the Kirkuk region. Besides Kirkuk, Tehran also deployed its proxies within the PMU, including the Badr Organization and Asaib Ahl al-Haq at the Fish Khabur crossing between Iraqi Kurdistan, Turkey and Syria. These border regions are important for transit into Syria’s north.

Some, such as member of the National Movement Rashed Satouf who hails from Raqqa, believes the United States, which was instrumental in the Raqqa takeover, will keep on supporting the governorate. “US influence over Syria’s north is here to stay,” he told Al-Monitor.

Yet Balanche believes that geography does not leave Raqqa decision-makers with many choices. Oil produced in the north flows into the T2 pumping station that is in regime hands, while food products come from the Aleppo region also under regime control. “This means that the north is encircled and will have to negotiate at some point with the regime,” he noted.

In addition, both the regime and Turkey are perceived as having a common interest to exploit Arab Kurdish faultiness. To overcome Raqqa’s ethnic sensitivities, the Kurdish component within the SDF worked hard on co-opting the governorate elites. Mustafa Bali, a spokesman for the SDF, told Al-Monitor that 60% of the militant group fighting force is comprised of Arabs. “There is close coordination with tribes and other tranches of the governorate population from which we draw our legitimacy,” he said.

Arab-Kurdish relations are nonetheless complicated by inter-Arab divisions. Satouf underlined that there were two civil councils for Raqqa — one for the city backed by the SDF and another for the governorate backed by the Syrian opposition. “Turkey’s influence over the opposition hindered a recent meeting in Rome between the two councils, in the framework of a donor conference,” he noted. An opinion also shared by Bali.

Yet inter-Arab as well as Arab Kurdish understandings will be essential in Raqqa’s next phase, mainly in terms of reconstruction and ridding the governorate of the jihadi threat.

According to a recent article by Aron Lund, at least four-fifths of Raqqa city is now uninhabitable because of material destruction, unexploded ordnance and a lack of electricity and water. “The Raqqa civil council has opened an office for reconstruction and has started clearing out debris, which is a difficult task because of all the unexploded ammunition,” Abdulsalam Hamsurak, a member of the Raqqa council, told Al-Monitor.

No specific figure for reconstruction has been earmarked yet for the city. The international community and Arab donors are wary of allocating aid as long as the city’s political future is unclear and after the Syrian regime has vowed to retake the city. “Turkey's influence — and its enmity with the SDF — is also stalling the donations collection work,” Van Wilgenburg told Al-Monitor.

Yet reconstruction is essential in stabilizing the region where tens of thousands of refugees are trapped in camps. Rebuilding schools is also key. There were over 1,500 schools in the governorate, with a potential of accommodating over 200,000 students, 78% of which have been completely or partially destroyed according to a report by ReliefWeb in October.

Working in the field of re-education of children is very important to pacify the region. “IS’ control over schools in the last few years will translate in another generation of radicals if no effort is made at the level of education,” Hamsurak said.

While the city per se was not an important jihadi bastion before the IS onslaught, jihadi bases existed across the governorate in areas such as Bir Moysen, Quneitra and the south Euphrates region, according to Satouf. “IS ideology will reproduce itself if no real [social and political] change is achieved,” he added.

Raqqa appears to be far from achieving both, given the pervasive and complex environment reigning over Syria, where the regional and local interest, corruption and warming still prevail.