With tension between the United States and Iran rapidly increasing, northern and eastern Syria could witness an upsurge in proxy clashes between parties backed by each side. 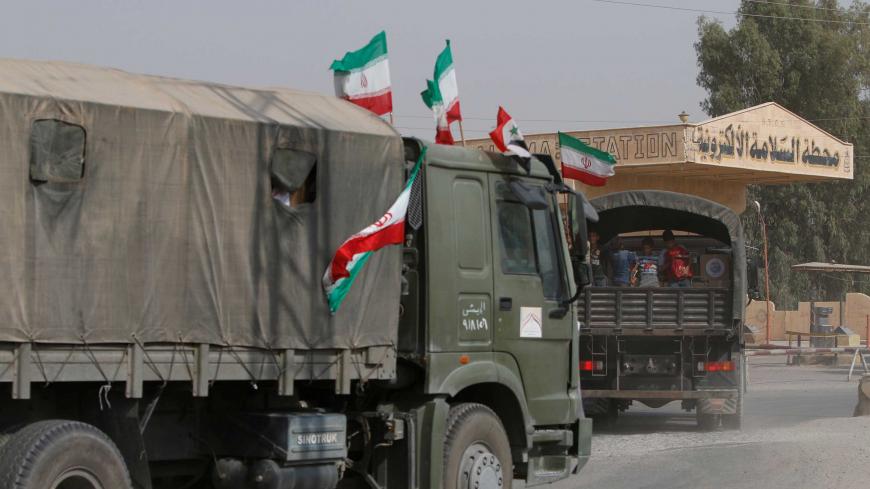 US President Donald Trump's unilateral pullout from the Iranian nuclear deal May 8 and increased warnings May 21 by US Secretary of State Mike Pompeo against Tehran’s ballistic missiles and regional proxy programs could herald more tension between Tehran and Washington, more specifically in areas where the two powers are in competition.

Pompeo said the United States and its allies would work on deterring Iranian aggression and track down Iranian operatives and proxies such as Hezbollah. Northeastern Syria is one region where this rivalry could play out because of the presence of US and Iranian troops supporting, respectively, Kurdish and regime forces, with a possible military escalation between the two powers.Also, Iran has been engaged in a faceoff with Israel since May 8, with the two countries exchanging rocket fire.

On May 7, the pro-regime website Al-Masdar reported, “The Syrian Arab Army (SAA) launched a massive assault in western Deir Ezzor … targeting the Islamic State’s (ISIS) large pocket in the Badiya region near the Homs provincial border. Backed by the National Defense Forces (NDF) and Liwaa Al-Quds (Palestinian paramilitary), the Syrian Arab Army began the operation on Monday by pushing west of the strategic city of Al-Mayadeen in central Deir Ezzor.”

Nearly concomitantly, the Kurdish-dominated Syrian Democratic Forces (SDF) backed by the US-led coalition announced a push on IS on the borders with Iraq. Since November, following the official Damascus announcement of victory over IS, both northern and eastern regions of Syria have become demarcation points between international and regional forces.

Northern Syria — including Manbij, Raqqa and sections of Deir ez-Zor — has been captured by the SDF. Eastern Syria is largely under control of regime forces loyal to Syrian President Bashar al-Assad, backed by Iran and Russia.

The fragile coexistence has resulted in tit-for-tat clashes. On April 29, the pro-opposition website El-Dorar Al-Shamia reported, "Regime forces backed by the NDF and the Iranian-backed Baqir Brigade as well as the Lebanese Hezbollah conducted a surprise attack on the US-backed SDF militia positions in the western suburb of Deir ez-Zor … controlling the villages of Jaya, al-Aleyan and al-Geneina."

Nawar Shaaban, a Syria expert with the Turkey-based think tank Omran Dirasat, told Al-Monitor, “The regime and pro-Iran militias are testing the SDF in that particular area. But the SDF reaction has been quick and the United States is constantly monitoring the region with drones.”

Farther north, dozens of young men demonstrated in the city of Raqqa on April 15 raising the Syrian flag and demanding the departure of US troops and Kurdish militants from the province. Protesters also condemned the April 14 US-led strikes on Syria, in retaliation for a suspected chemical attack in the rebel-held town of Douma.

Al-Ahram reported, quoting Deutsche Presse-Agentur, that the demonstrations were the first to take place against the SDF in Kurdish-controlled areas, with protesters demanding the withdrawal of US troops and Kurdish units. “Raqqa has been under the control of the SDF since last October,” Al-Ahram wrote. In addition, pro-opposition website Enab Baladi underlined that several rounds of protests had taken place in the city against the SDF.

Last November, Assad declared that IS’ former capital Raqqa would be considered “occupied” until the Syrian army took it back from the SDF and Washington.

“The regime has also created a local council [equivalent to the local civil council backed by the United States in Raqqa] and has promised positions for Raqqa residents who are now located in regime areas in preparation for the regime's return,” Syrian activist Rashed Satouf told Al-Monitor.

The regime and Iran’s actions expand further north in Kurdish-controlled areas, where, Shaaban explains, they have formed a Popular Resistance trained by the pro-Iranian Baqir Brigade that is part of the Local Defense Forces. “The Popular Resistance is principally engaged in propaganda activity. It also targeted the US military base of Ain Issa last month,” Shaaban added.

Also in April, the Baqir Brigade, one of a number of Iranian-backed militias operating in Syria, announced on its Facebook page — which was taken offline shortly after — that it would begin attacks on US military personnel.

The competition of regional powers in the northern and eastern regions is motivated by economic and political interests. First, the Assad regime is working on recapturing all of the territories that it lost in the post-2011 revolution phase. Second, it has economic interests, namely due to the presence of two-thirds of Syrian oil in the area, which is also rich in gas resources and has important trade routes such as the highway linking Baghdad to Damascus. Third, it views the persistence of a Kurdish autonomous area under US protection as a direct threat.

Iran has other calculations. The region is an essential land corridor for Tehran stretching from Iran — via Iraq — and leading into Lebanon.

Both Iran and the Syrian regime favor limited confrontation and indirect military operations vis-a-vis the Kurds and their US backers, given the large resources invested in the area by Washington. For Iran and Assad, subversive techniques range from triggering unrest against the SDF, exploiting Arab Kurdish differences and working on an underground network that can be more effective in the war with the United States — and even more with Washington’s escalating strikes on Syria. The latest US-led airstrikes took place in the early hours April 14, a week after the suspected chemical attack in Douma, which opposition activists say killed more than 40 people.

“We are seeing limited clashes between pro-regime forces and the SDF, and the regime is also working on exploiting Kurdish Arab rivalries and creating undercover networks that are part of the Assad regime and its Iranian ally creeping policy in the northeast of Syria — in the region,” noted Shaaban, who believes that much of the covert and overt activity will target Deir ez-Zor, Bukamal, al-Mayadeen, Raqqa, Manbij and Hasakah.

Satouf added, “It is in the interest of the regime and its allies to weaken the Kurdish and US hold on the area by attempting destabilization. With that goal in mind it is trying to rely on Arab tribes and on the feeling of resentment by some Arabs against the SDF. But in my opinion, it is not going to be that easy because of the strong Kurdish and US presence in the region."