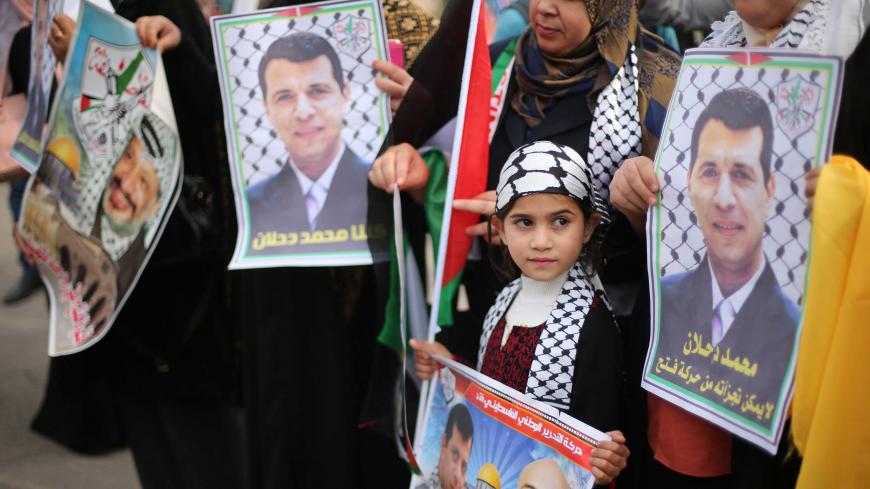 GAZA CITY, Gaza Strip — The success of the internal Palestinian reconciliation hinges in large part on how the parties involved handle their highly sensitive security issues. For years — since their violent split in 2007 — security has posed the biggest stumbling block for both the Fatah and Hamas rival political parties and has hampered all Arab and regional efforts toward their reunification.

The Fatah-dominated Palestinian Authority (PA) in the West Bank has always refused to allow Hamas forces in the Gaza Strip to merge with its own.

Another security-related issue recently came up, namely what to do with those officers affiliated with Fatah’s Reformist Current, which was headed by dismissed Fatah leader Mohammed Dahlan. These officers represent a large part of the Preventive Security Service, also known as the Palestinian Preventive Security (PPS), founded by Dahlan in 1994 by order of late President Yasser Arafat. Over the years, the PA has cut the salaries of hundreds of these officers in both Gaza and the West Bank and forced many into early retirement in the wake of the dispute that broke out in 2010 between Dahlan and PA President Mahmoud Abbas.

A senior PA security official told Al-Monitor on condition of anonymity that PA security has formed committees in the Gaza Strip to investigate all the officers under age 45 who plan to remain within the ranks of the security services, particularly those affiliated with Dahlan’s faction, to either dismiss them or force them into early retirement.

The first investigation, he said, showed there are between 1,500 and 2,000 Dahlan-affiliated officers in Gaza, mostly working in the PPS, and a few in the General Intelligence Service. He pointed out that Fatah and Hamas briefly discussed the security issue during reconciliation talks Oct. 10 in Cairo. As a result of their differences — which almost derailed the talks — head of the Egyptian intelligence service Khaled Fawzi proposed postponing talks on the topic until the two sides form a joint security committee from Gaza and the West Bank to resume discussions in Cairo in early December. The source further confirmed that Palestinian Prime Minister Rami Hamdallah discussed this proposal during a meeting with security services leaders Oct. 27 in Ramallah in the West Bank.

Ashraf Jumaa, a member of the Palestinian Legislative Council and a leader in the Reformist Current, told Al-Monitor the PA’s security services in the West Bank are investigating and contacting security officers in the Gaza Strip to find out more about their affiliations. He said these steps are provocative and unacceptable.

Jumaa stressed that the security issue entails three main goals: rebuilding the security services and merging the forces in the West Bank and Gaza; having a unified security doctrine; and forming a security committee by presidential decree, with Egyptian follow-up and Arab support. This committee would discuss the status of Gaza’s security officers without having to dismiss them or force any into early retirement, for whatever political reason.

Azzam al-Ahmad, a member of Fatah’s Central Committee and head of the delegation in the Cairo talks, stressed that the doctrine of the PA’s security services is a national one and not a doctrine of factions, nor does it follow foreign agendas. He noted that Palestinian law prohibits security officers from being involved in political action.

When asked about dismissing Dahlan-affiliated officers, Ahmad told Al-Monitor, “I have no information about this and I will not discuss this topic. We are currently taking steady steps to achieve internal reconciliation. As a first step, the PA’s security forces took over the administration of the Gaza crossings and deployed officers along the border on Nov. 1, in the presence of an Egyptian security delegation.”

Meanwhile, Palestinian Pension Agency head Majid al-Helou said in an Oct. 25 interview with Sawt Palestine radio that another 7,000 security officers in the West Bank and Gaza have been told they must retire, following 7,000 others in August. The current move, according to the government, is an effort to reform and improve the performance of security agencies. He stressed that this step complements previous actions as part of a plan prepared years ago and has no political goals.

The head of the Center for Regional Studies in Gaza, Ayman al-Rafati, told Al-Monitor that dismissing Dahlan-affiliated officers implies that the elimination of any Dahlan supporters left in Gaza is a priority for many of the PA leaders who believe some Arab and international parties see Dahlan as an alternative or a successor to Abbas.

Rafati said the PA will reorganize the security services in the Gaza Strip and employ officers loyal to Abbas by opening recruitment for two months. The PA urgently needs to impose true security control, given that it's been a decade since the PA has had any real contact with its Gaza security officers.

Rafati did not rule out the possibility of dismissed Dahlan-affiliated officers trying to ruin the reconciliation process by either organizing protests or carrying out attacks against PA-affiliated officers, thus resurrecting the security chaos that prevailed in Gaza before 2007.

Hisham al-Maghari, a security expert and dean of al-Awda University College in Gaza, told Al-Monitor he expects Abbas’ security services to force all those connected to Dahlan into early retirement. He added that the lists to be submitted for the PA-Egypt joint security committee will most likely not include Dahlan-affiliated officers.

Like Rafati, Maghari also believes dismissing these officers could pose quite the threat if security disturbances erupt to pressure all parties to give the officers back their jobs.

Dismissing these officers or forcing them to retire would sound an alarm, as it could be seen as the first step to the PA dismissing large numbers of other officers appointed during the years of division, particularly those appointed by Hamas, whose numbers amount to 18,000 employees.