Why Abbas is shaking up Palestinian security services

Expected appointments and replacements within the Palestinian security services may not pass without the blessing of Israel and the United States. 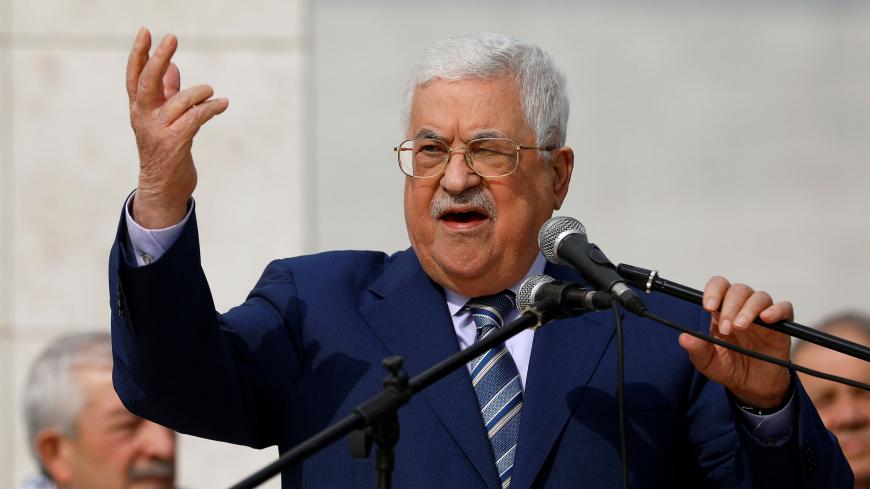 Palestinian President Mahmoud Abbas gestures as he speaks during a ceremony marking the 14th anniversary of the death of late Palestinian leader Yasser Arafat in Ramallah, in the occupied West Bank, Nov. 11, 2018. - REUTERS/Mohamad Torokman

The Palestinian arena has of lately witnessed successive events, beginning with the resignation of the Palestinian government on Jan. 29, the start of consultations to form a new government, the leaks in late January that the US administration's Mideast peace plan would be announced soon, and the announcement by the Palestinian Authority (PA) on Feb. 10 that international institutions have responded to a US request for a financial blockade on the PA.

In addition, the Israeli government carries on with its settlement projects after it approved in January the construction of 2,500 settlement units in the West Bank and Jerusalem settlements. Also in January, the Israeli army continued its incursions into West Bank cities on the pretext of pursuing Palestinian militants.

Meanwhile, reconciliation between Fatah and Hamas reached an impasse after the PA withdrew its employees from the Rafah crossing on Jan. 8.

Amid these developments, informed Palestinian sources told Sama News on condition of anonymity on Feb. 4 about major changes in the leadership of the security services. The report said Palestinian President Mahmoud Abbas will make some appointments, which may include designating head of the intelligence apparatus Zakaria Mosleh as head of the Preventive Security Service, instead of Ziad Hab al-Rih, who may be appointed as an adviser to Abbas for province affairs.

Meanwhile, Amine Fawalha could head the military liaison service, replacing Jihad al-Aaraj, and Iyad Abbas may be appointed as head of military finance, replacing Omar Ghaith, who suffers from difficult health conditions. Brig. Gen. Ghassan Nimr may take over the position of spokesman for the security services instead of Adnan al-Damiri. Either Ramadan Awad or Jihad al-Msaymi could head the police, replacing Gen. Hazem Attallah, who is a candidate for interior minister.

The sources expected General Intelligence Service head Maj. Gen. Majid Faraj to be appointed an adviser to the president for national security, for Khaled Abu Yemen to be his successor, and the head of the military justice system Ismail Farrag to retire for reaching the age of 60.

The new appointments have yet to be officially announced, but Al-Monitor contacted a number of senior Palestinian security officers in the West Bank, who revealed on condition of anonymity that the Palestinian presidency and heads of the security services are discussing these appointments, which will be announced at any time.

On Feb. 6, caretaker Prime Minister Rami Hamdallah appointed Nimr, who was a member of the Presidential Guard, as a spokesman for the Ministry of Interior and a media coordinator in the security services.

The decisions of the new appointments bear several indications. Their timing comes at a sensitive stage of the Palestinian cause, both internally given the Palestinian division, and externally in light of the estrangement with Israel and the US administration. Noteworthy is that all names mentioned in the possible appointments are senior officers who have been involved with the security services for many years, and all of them will move from one apparatus to another, with no mention of new names from outside the services.

The Palestinian security services in the West Bank consist of four main bodies, namely the National Security Forces, the General Intelligence, the Military Intelligence and Internal Security. The latter includes the police, the Preventive Security Service and Civil Defense. The security services are made up of 66,000 officers, or an average of one officer for every 48 Palestinians.

The PA has a major issue with senior officers, including brigadiers, brigadier generals and colonels, whose salaries are a great burden on the PA’s budget, which already suffers from a financial crisis. The security services take up 31% of the government budget, with an average value of $1 billion.

However, a survey conducted by the Palestinian Center for Policy and Survey Research (PCPSR) in December 2018 showed that only 47% of West Bank residents feel secure as they consider that these officers did not provide security for Palestinians in the West Bank.

PCPSR head Maj. Gen. Mohammed al-Masri, who served as director of the General Intelligence Service in Gaza before Hamas took over in 2007, told Al-Monitor, “Only President Abbas can take a decision to make security changes; be it to rotate officers or refer them to retirement. However, the expected appointments are all linked to political development and the relationship with Israel, whose army repeatedly invaded the West Bank, putting security services in an embarrassing position before the Palestinian public opinion, and showed that they are unable to prevent these Israeli incursions. In addition, the US support for these services stopped in the beginning of February.”

In light of the Palestinian political stalemate — with Abbas being in office since 2005 and legislative elections not being held since 2006 even though both presidential and legislative mandates have expired — security changes are significant, especially since changes should have been made ages ago as no officer should remain in position after reaching 60 years of age or after having major health issues; in such cases, officers need to retire and make room for others.

Abbas has been making changes to the leadership of the security services every few years, first in 2009 and then in 2014 and 2016.

The expected changes do not affect the PA’s commitment to the peace process and the security coordination with Israel, which includes pursuing Hamas — which means that any changes are acceptable to Israel and the United States. On Sept. 20, 2018, the US State Department issued a report praising the performance of the Palestinian security services by fighting Hamas in the West Bank.

Raed Nairat, a professor of political science at An-Najah National University in Nablus in the northern West Bank, told Al-Monitor that “the upcoming changes are related to the senior officers of the apparatuses, not the Palestinian public policies. The major issues such as the relationship with Israel, the position on the 'deal of the century' and reconciliation with Hamas fall within the competence of Fatah’s Central Committee. Security officers are not part of this, and these are routine changes, not political ones; they only aim to rotate and reposition officers.”

On Feb. 5, Ehud Yaari, editor of Palestinian affairs with Israel’s Channel 12 and a close associate of the PA, said in his article on the Mako channel that Abbas would announce new security appointments in line with the arrangement he will make for his successor, especially when it comes to Faraj, head of the General Intelligence Service, and Attallah, commander of the National Security Forces, known for being his most loyal supporters.

Ibrahim Habib, dean of scientific research at the Ribat University College of the Interior Ministry in Gaza, told Al-Monitor, “The Palestinian security changes serve Abbas during this critical period of the end of his term. Given the US and Israeli knowledge of the Palestinian security structure, any change in senior positions will only happen following their approval. As long as the PA’s security services believe in fighting Hamas, Washington and Tel Aviv will approve, regardless of tensions with the PA.”

These changes come at a time when Palestinian security services are competing against each other to be on Abbas’ good side — Abbas has made sure since he took office in 2005 not to limit the power to certain officers. Instead, Abbas sought to distribute the roles to the largest number of officers who were loyal to him so he makes sure everything stays under his control. This is why tension has now risen among officers.