How Riyadh orchestrated its own downfall in Lebanon

Saudi Arabia's policy shift toward Lebanon in trying to curb Hezbollah's power has failed miserably and made Saad Hariri the most popular Lebanese leader. 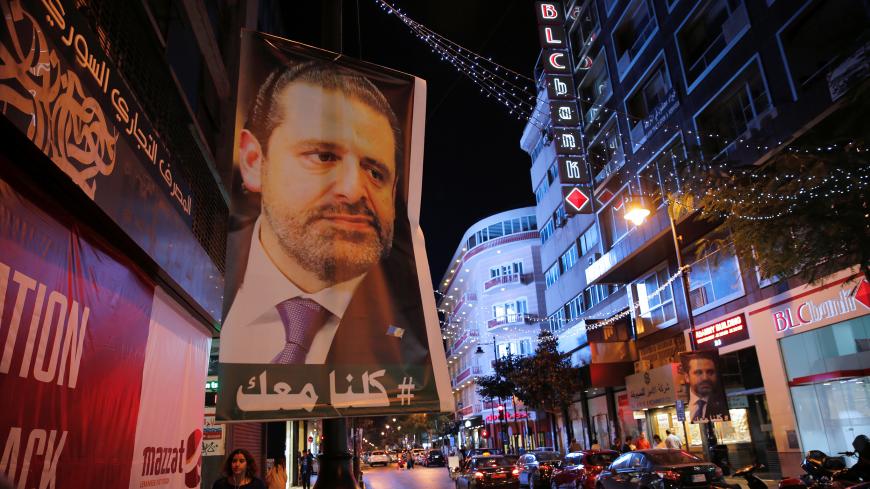 A poster depicting Saad Hariri, who has resigned as Lebanon's prime minister, is seen in Beirut, Lebanon, Nov. 14, 2017. - REUTERS/Jamal Saidi

The latest Saudi ultimatum to Lebanon, after the baffling resignation of Lebanese Prime Minister Saad Hariri, is reminiscent of a similar development half a century ago. In February 1967, Riyadh warned Beirut to remain neutral in the kingdom's tug of war with Cairo over Yemen and threatened to evict Lebanese expatriates and withdraw Saudi cash deposits from Lebanese banks. The Saudis' pressure united Lebanese politicians, and Riyadh never followed through on its threats. Looking back at 65 years of engagement, Saudi Arabia has never had a Lebanon strategy. Several factors — most notably the geographical distance from Lebanon, the lack of a powerful or armed Lebanese ally and the lack of coerciveness and purpose —have hindered its ability to develop an effective policy.

To the Lebanese, Saudi Arabia always came second to Egypt, Israel, Syria and now Iran. In the 1970s, Riyadh pursued two contradictory goals in Lebanon: endorsing Palestinian resistance against Israel and supporting a strong Lebanese state. In the 1990s, Riyadh reached its maximum influence by empowering the Syrian regime's control over Lebanon in return for expanding the powers of the Sunni prime minister and containing Hezbollah. This influence, however, was restricted to economic affairs, while Damascus handled politics and security, which left Lebanon's economy increasingly dependent on Saudi Arabia.

Indeed, the emergence of Saudi-backed Rafik Hariri to lead post-war Lebanon gave Riyadh a seat at the table, but the Syrian regime kept Hariri in check as he began to develop an extensive network of contacts with world leaders. Riyadh helped Hariri consolidate power at the expense of all other Sunni leaders in Lebanon, as demonstrated in the 2000 parliamentary elections. His assassination in February 2005 ended Syrian-Saudi cooperation in Lebanon and forced Syrian troops out of the country. Iran gradually filled the void, and Hezbollah became directly involved in Lebanese politics.

Pressuring Saad Hariri to resign and confront Hezbollah marks a landmark shift in Saudi policy. Riyadh's policy tradition in Lebanon had long been to mediate between rivals, maintaining the same distance from all Lebanese groups and supporting the central government. Riyadh has been most effective in Lebanese politics when acting in the shadow of the United States or Syria, rather than in the forefront. Saudi policy has traditionally viewed Lebanon through the lens of the Arab-Israeli conflict.

Riyadh has been known to pull back from Lebanese politics when confronted with adversity and re-engage when rival parties appear ready to talk. In 1979, after gunfire hit the helicopter of the Saudi ambassador to Lebanon, Riyadh withdrew nearly 700 soldiers from the Arab Deterrent Force deployed to preserve Lebanon's stability. That move allowed the Syrian army to gradually gain control of Lebanon and paved the way for the Israeli invasion in 1982. In May 2008, when Hezbollah clashed with and disarmed the Future Movement, led by Saad Hariri, Saudi Arabia backed away and endorsed the Doha Agreement, which ended Lebanon's political crisis in 2008. The guiding principles of Saudi policy have now completely changed.

Preemptive and aggressive political pressure has replaced mediation and withdrawing during adversity. Now, Riyadh considers Iran the major threat instead of Israel. Saudi policy is no longer in the shadow of the United States or Syria. Cash-strapped Riyadh is not providing financial assistance to the Lebanese government or to anti-Hezbollah political parties, including the Hariri-led Future Movement. Riyadh is stepping in to directly deter Hezbollah, overlooking the concerns of allies inside and outside Lebanon.

The Saudis, who once romanticized Lebanon's service-oriented economy and tourist trappings, believe the country is slipping from their hands. The Lebanese, who built their wealth in Saudi Arabia and whose government once relied on Riyadh for assistance, are contemplating new markets. The trade volume is now in favor of Saudi Arabia, and Riyadh withdrew all its cash deposits from the Lebanese central bank after the Hezbollah war with Israel in July 2006. In addition, the Syrian war has changed the way the Lebanese economy functions. Traveling from Lebanon via Syria to reach the Gulf countries is no longer an option, so alternative maritime trade routes are being explored. The most potent connection between the two countries remains, however, the 350,000 Lebanese nationals who work in Saudi Arabia and transfer an average of $4.5 billion to Lebanon annually.

One cannot underestimate the long-term implications of the kingdom's move. In the past few weeks, the anti-Saudi sentiment within the Lebanese Sunni community has been alarming and unprecedented. Riyadh inadvertently made Hariri the most popular Lebanese leader, endorsed by everyone except his own principal in Riyadh. In the past two decades, Saudi policy weakened every Sunni leader to prop up Rafik Hariri and is now complaining that Saad Hariri cannot politically confront Hezbollah after gradually stripping him of power, including financial resources.

The concept of Lebanon's neutral foreign policy has been from the necessity of avoiding a Saudi backlash against the Lebanese economy, as Beirut always viewed Riyadh as the wealthy secondary power that should be accommodated, not followed. While deterring Hezbollah is paramount, doing so requires a long-term approach of cultivating relations in Lebanese politics, whereas Saudi policy has been absent from Lebanon since 2011.

Riyadh's risky gambit had no realistic endgame or allies to execute it. It has failed miserably no matter the outcome. Once Saudi Arabia overcomes its own domestic turmoil, damage control is imperative to sustain influence in Lebanon.