After Hariri’s resignation, what’s next for Lebanon?

Saad Hariri, in Saudi Arabia, resigns as Lebanon's prime minister, leaving observers to wonder why and speculate about Lebanon's future. 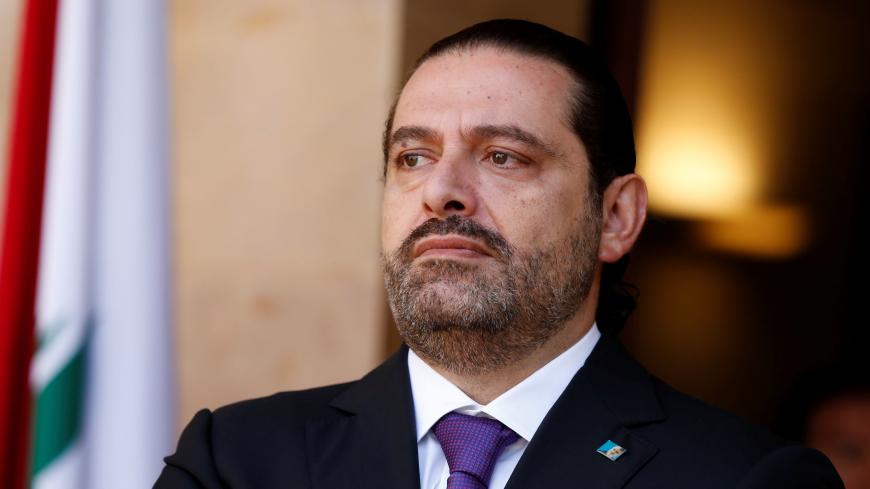 For those who entertain the dark allure of Arab conspiracy theories, Nov. 4 was a red-letter day. In the space of a few hours, Riyadh, Saudi Arabia, was the convergence point of three significant developments. One was that Lebanese Prime Minister Saad Hariri announced his resignation. The second was that Saudi Crown Prince Mohammed bin Salman cracked down on rivals in the ruling family. The third was that a long-range ballistic missile was aimed at the Saudi capital by Yemen's Houthis.

Nothing about Hariri’s most recent travel plans or political views hinted that a resignation was imminent; this opened the door for speculation that he either had survived an assassination attempt in Beirut or was under house arrest in Riyadh. He has a history of being under Saudi pressure. In 2009-2010, when serving as prime minister for the first time, Hariri complained to US officials about Saudi pressure on him to make peace with the Syrian regime. Once the Saudi-Syrian rapprochement began to fray, Hariri was ousted from power in January 2011, within minutes of taking a photo with US President Barack Obama in the Oval Office. Most recently, Hariri was pressured by Saudi officials not to engage the Syrian regime or succumb to Iranian influence.

There are three plausible explanations for his Nov. 4 resignation.

The first plausible explanation is Lebanon’s legislative elections scheduled for May. While the Cabinet had reluctantly agreed on a new electoral law, there are procedural disagreements regarding how to implement it. In recent weeks, Saudi Arabia has been unable to rally Lebanese leaders electorally against Hezbollah. Hariri’s ability to win by a decent margin is seen as slim due to his depleted financial resources and his perceived appeasement of Hezbollah. While the elections are up in the air for now, Hariri could be attempting to galvanize his base, just as his father, Rafiq Hariri, did while he was alive.

The second plausible explanation is Hariri’s standing in the crown prince's entourage. Since King Abdullah died in 2015, the Lebanese prime minister’s investments in Saudi Arabia have gradually fizzled. Hariri, who for months resisted Saudi pressure to act against Hezbollah, may be sending, through his resignation, a clear message of allegiance to the crown prince. If Hariri survived the latest crackdown that targeted key Saudi businessmen, this could mean that Hariri’s political stock in Riyadh has risen and that he may have the chance to finally save his company, Saudi Oger.

The third plausible explanation is the Saudi-Iranian competition. It is worth noting that as the Islamic State (IS) emerged as a major force in 2014, Riyadh made a detente with Tehran in Beirut and retreated from Iraq. Now that the war against IS is winding down, Riyadh has seized an opportunity to reassert its influence in Iraq and revoke the political detente with Iran in Lebanon. The Saudi move may aim to challenge Hezbollah’s status quo by forcing the hand of Iran in Lebanon in return for a compromise elsewhere, most notably in Syria. Pushing the envelope, though, as outlined by Hariri’s resignation, is an indication that Riyadh might not be ready yet for an open confrontation with Tehran.

The crucial question now is what will happen following Hariri’s resignation. The speculation that hell will break loose is overstated; this is not the first nor the last political crisis in Lebanon. There are some things to watch that might indicate what will come next. First is whether the security coordination between the Hariri-led Future Movement and Hezbollah will continue via the official agencies loyal to them. Second is whether Iranian-backed Hezbollah will push for a new prime minister to make the point that Lebanon can be governed without Riyadh. Third is whether the United States will join the Saudi push in Lebanon.

There are three main possible scenarios in the coming weeks and months.

Normalizing the void left by Hariri’s resignation is the first scenario, which would likely entail a paralyzed caretaker government and an extension of the parliament’s term once again. The Lebanese crisis would subsequently be on hold with no further escalation, on the back burner of US priorities such as Yemen and the GCC crisis, as deterring Iran takes center stage.

The second scenario would be to challenge Riyadh and select a confrontational prime minister, which would enable Hariri to lead the opposition against the new Cabinet.

The third and most effective scenario would be to form a transitional technocratic government, led by a neutral Sunni figure approved by Hariri, with the sole purpose of organizing the legislative elections. This would allow Hariri to run freely as an anti-Hezbollah candidate without the restrictions of governing.

It is unclear exactly what position the United States will take in all this; a US official told Al-Monitor that the expectation in Washington is that “an orderly political process” will follow in Lebanon.

If there is any benefit from the resignation, it is that it should be a wake-up call for Hezbollah’s miscalculations concerning Hariri by overtly embracing him, portraying him as weak and hinting there is a daylight between him and Riyadh. Prolonging the Iranian-backed group’s controversial adventure in the Syrian war carries dangerous regional risks, and normalizing relations between Beirut and Damascus should not have been a pressing priority ahead of the legislative elections. There also should be recognition that the Saudi return to Lebanese politics, after a long absence, might be too little, too late, that having a Lebanon policy might not be enough to counter Iran if there is no Syria policy, and that the common interests that bind the Lebanese oligarchy are usually stronger than any external pressure.