The Human Rights and International Humanitarian Law Secretariat decided to defund a Palestinian women’s organization on charges of incitement against Israel. 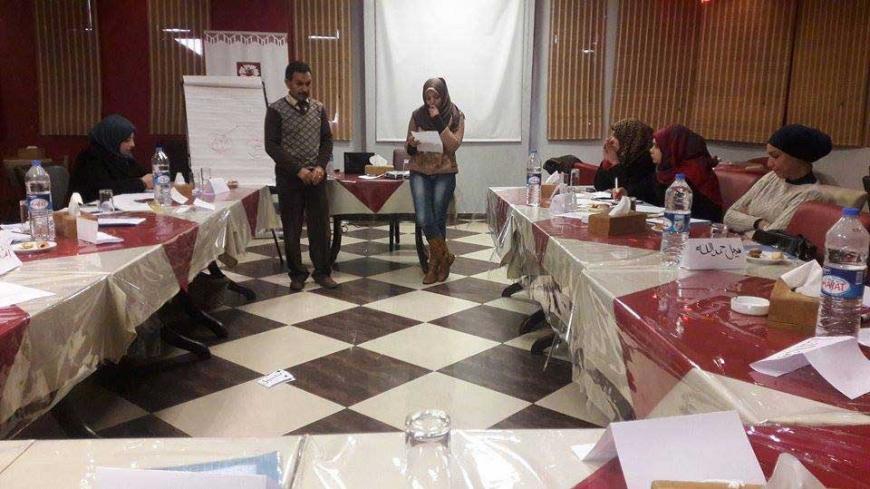 The HR/IHL Secretariat is a joint donor program sponsored by four European governments, namely Denmark, the Netherlands, Sweden and Switzerland, and is dedicated to supporting Palestinian and Israeli nongovernmental organizations in bringing about real and sustainable societal change while applying human rights based approaches.

Al-Monitor attempted to contact the HR-IHL Secretariat representatives in the Palestinian territories to no avail. No official statements have been issued regarding the decision to defund the WATC organization.

Samia Bamya, the chairperson of WATC, told Al-Monitor that the secretariat recently decided to defund her organization because of the organization’s participation in the May 15 establishment of a women's center named after Palestinian Dalal Mughrabi. The center for culture and community was established to serve the people of the town of Burqa in Nablus, north of the West Bank.

The center was established by the village council of Burqa and funded by the Norwegian government through the Palestinian Central Elections Commission and the UN-affiliated Commission on the Status of Women, which supports the participation of Palestinian women in the elections.

At 20 years old, Mughrabi led a 1978 attack to hijack an Israeli bus. The attack killed more than 30 Israelis, while Mughrabi, among other fighters, were also killed. The operation came as a shock for Israel, which is still withholding Mughrabi’s body to date.

Bamya said, “The HR/IHL Secretariat asked the WATC organization to take a stance against the name, and when we decided to respect the choice of the people of the Burqa town to name their center after [Mughrabi], the secretariat used our position as a pretext to defund our organization.”

Established in 1992, the WATC is headquartered in Ramallah, in the center of the West Bank. It has a branch in the Gaza Strip and implements many projects and programs aimed at the development of the conditions of Palestinian women in the West Bank and Gaza. Its projects include Women and Work, Violence Against Women, “Political Participation” and “Empowerment of Women's Frameworks,” as enumerated by WATC Director General Srida Hussein. According to Hussein, the HR/IHL Secretariat's decision to defund the WATC organization will affect all these programs and projects.

“The funding suspension will mainly affect about 200 individuals working on the implementation of projects and programs aimed at developing the skills and abilities of about 2,500 Palestinian women annually,” she added.

For Bamya, cutting off $160,000 in yearly support would disrupt the progress of the institution’s projects and programs and would affect its work in fulfilling its mission to develop women's conditions in all aspects of life. “Despite the damage resulting from the cessation of funding, we will never make concessions as far as our principles and national and community role are concerned for the sake of receiving conditional funding,” she noted.

Bamya denounced the decision of the HR/IHL Secretariat member states to suspend funding despite their commitment to human rights and international humanitarian law and said the decision resulted from the glorification of the name of a Palestinian militant who symbolizes Palestinian resistance against the Israeli occupation. “Meanwhile, Israel continues to occupy our Palestinian territories as those states stand idly by,” she added.

She accused the Israeli government of launching an incitement campaign against both its organization and the Dalal Mughrabi Center, which led to the suspension of European funding for both of them. She also denounced the donor countries’ compliance with the campaign.

On May 28, the government of Norway, one of the supporters of the WATC establishment, denounced the naming of the center after Mughrabi and called upon the Palestinian Authority to remove the country's name from the center’s building. It also asked that the funds that Norway paid for the construction of the center be returned. Meanwhile, the United Nations decided to defund the center and deemed its name as a “glorification of terrorism.”

On May 29, Israeli Prime Minister Benjamin Netanyahu praised the Norwegian position and said his country has put pressure on donor countries and will continue to do so.

She said, “All of the women institutions working in the Palestinian territories are acting in accordance with Palestinian national strategies that support the Palestinian cause and preserve the history of our struggling people. Therefore, any foreign funding that does not go in tandem with these objectives is refused."

Meanwhile, she hailed the WATC’s refusal of conditional funding and said, “Claims whereby reviving the names of our fighters by naming Palestinian centers, squares and streets after them fall under the category of incitement to violence. They are false claims and a distortion of the truth. Israel is the one inciting countries against us and killing our people continuously.”

Asked whether the Palestinian Ministry of Women’s Affairs will provide any support for the institution to help it weather the crisis, Haroun said, “The ministry does not provide financial support to women's institutions and projects. Its mission is to secure international support for these institutions through grant programs offered to third world countries.”

Bamya hopes that the HR-IHL Secretariat would reconsider its decision given the harm inflicted on women who benefit from the institution’s projects and programs with the aim of developing their skills and empowering them economically, politically and socially.

It may seem to many that the Palestinians do not have the right to feel enraged at the injustice of the defunding of Palestinian institutions named after people who have carried out armed operations against Israel. However, this Palestinian feeling certainly stems from a belief that such policies are not applied to Israel, which glorifies the names of several Israelis accused of committing massacres against Palestinians. It named the Israeli settlement Ariel in the northern West Bank after former Israeli Prime Minister Ariel Sharon, accused by the Palestinians of being behind many of the massacres that led to the deaths of hundreds of them.