Apparently at Israel's request, some Palestinian nongovernmental organizations are losing their financial support from abroad over allegations of their links to terrorism. 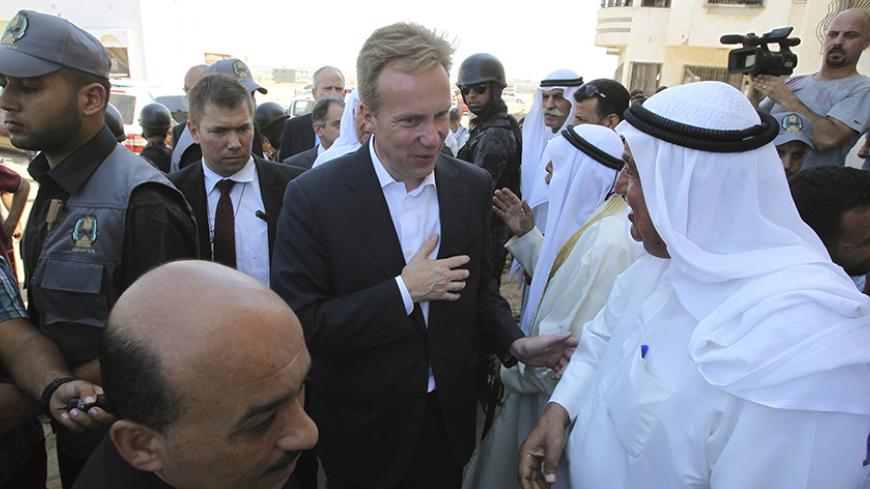 RAMALLAH, West Bank — Some international donors recently stopped funding Palestinian nongovernmental organizations that, according to Israel, participate in boycott campaigns against it or glorify Palestinians who have carried out attacks against Israelis. The donors include the United Nations, Denmark and Norway.

On May 26, Norway said it would halt funding to a Palestinian women's center, a project of the United Nations Entity for Gender Equality and the Empowerment of Women, also known as UN Women. The West Bank center in Burqa, Nablus province, aims to promote women’s participation in elections, but is named after Dalal Mughrabi, a woman who led a 1978 attack in Tel Aviv by hijacking a bus and killing 37 civilians, 12 of them children. Israel obviously considers Mughrabi a terrorist, yet she is called a freedom fighter and war hero in Burqa.

“We will not enter into any new agreements with either the Palestinian Election Commission or UN Women in Palestinian areas until satisfactory procedures are in place to ensure that nothing of this nature happens again,” he said.

On May 28, Stephane Dujarric, the spokesman for UN Secretary-General Antonio Guterres, said, “The United Nations disassociated itself from the center once it learned the offensive name chosen for it. … The glorification of terrorism, or the perpetrators of heinous terrorist acts, is unacceptable under any circumstances.”

The center was established as part of a joint initiative of Palestinian NGO Women’s Technical Affairs Committee (WTAC), the PA, UN Women and the Norwegian government.

Center director Reem Hajje told Al-Monitor, “The center started carrying out its activities in December, but its official opening took place May 15. It received $10,000 as a grant from Norway’s government through WTAC. The amount was spent on purchasing supplies for the center.”

Hajje explained that the Mughrabi name had already been chosen when the center applied to WTAC for funding, and all forms and papers were filled out under this name. This means Norway knew from the beginning the name of the center and raised no objections to it. Norwegian officials might not have recognized the significance of the name, however.

On June 3, Danish ambassador to Israel Jesper Vahr announced that his country froze $8 million in funding earmarked for some two dozen Palestinian centers and NGOs, though he didn't mention their names. He claimed they “glorify terrorists” and said his government will ask these NGOs to return grants they had already received and spent.

Israel is said to be pressuring donors. In fact, Danish Foreign Minister Anders Samuelsen said Israel had recently urged him to halt funding to NGOs that are involved in the boycott, divestment and sanctions movement, which seeks to place international pressure on Israel to stop building settlements in the West Bank.

Foreign financial support started flowing to Palestinian NGOs, which previously had relied on volunteerism, after the PLO and Israel signed the Oslo Accord in 1993.

Khalil Nakhleh, a Palestinian anthropologist, is a former adviser to the European Commission's office in Jerusalem and supervisor of EU educational programs. He wrote a book on foreign financing titled “Globalized Palestine: The National Sell-Out of a Homeland.”

Nakhleh told Al-Monitor, “Relations between foreign funding institutions and Palestinian individuals or NGOs are fully controlled by the financiers. The financed NGOs are obliged to abide by the financiers’ conditions and requirements in carrying out their activities.”

He explained that financiers can determine the scope and course of activities to be carried out by the NGOs. “The foreign financiers’ vision is often biased toward Israel and contradicts the principles of the Palestinian struggle against occupation,” Nakhleh said.

Financiers are enabled by "the lack of Palestinian official and popular supervision over funding and the absence of a local and national funding alternative to support institutions and NGOs,” he said.

A number of international donors are seeking ways to boost their control over the financing process, he added. “For example, USAID requires any NGO or institution seeking a grant to sign a statement renouncing terrorism and declaring resistance by Palestinians to be acts of terrorism, while other financiers carry out a background check for anyone involved in any project to be financed.”

Iyad Riahi, a political and social researcher at the Social and Economic Policies Monitor, told Al-Monitor, “The current foreign funding crisis is not related only to the nature of the conditions imposed by financiers, but also to the classification of Palestinian NGOs because of their political positions toward Israel, such as the NGO called al-Haq.”

On Aug. 10, Dutch newspaper NRC published an article on harassment and death threats received by Nada Kiswanson, a legal researcher and representative of al-Haq in Europe. NRC also noted there had been a series of threats against al-Haq staff members and defamation campaigns against the NGO since September 2015.

According to Riahi, Israel constantly monitors Palestinian NGOs and incites financiers against every NGO that takes a position against Israel’s occupation forces.

Commenting on the reasons behind Israel’s influence on the funding sources, Riahi said, “The Israeli smear campaign against Palestinian NGOs is far-reaching. The media outlets used are larger and stronger than Palestinian media outlets, and the Israeli Foreign Ministry is exerting more effort than its Palestinian counterpart. Add to this the lack of any organized or regulated activity by Palestinian NGOs, which gives credibility to Israel’s campaign.”

Palestinian NGOs need to make a united stand regarding donor countries’ inclinations to halt support and impose conditions, which he said are the outcome of years of Israeli incitement. “A unified and well-studied response is necessary so that other donors do not take the same positions,” he added.