Defense Minister Avigdor Liberman is asking for an increased budget for the Israel Defense Forces to prepare itself against new threats developing along its northern border with Syria. 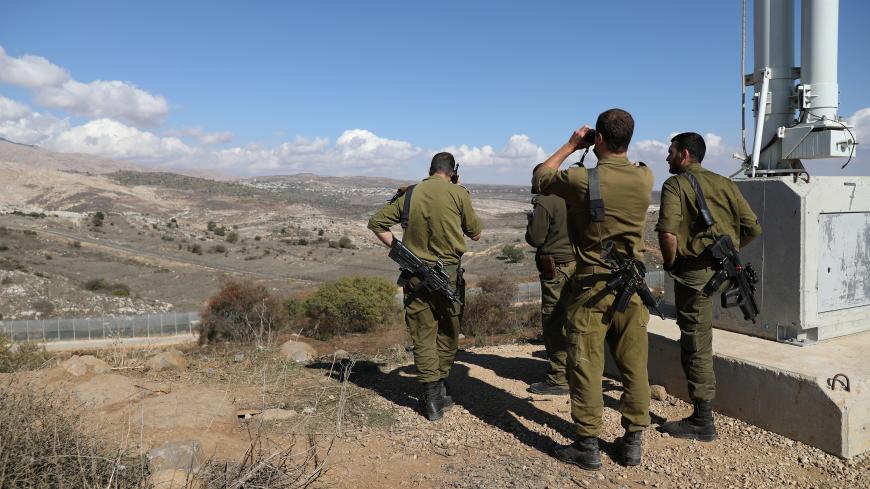 Israeli forces are seen near a border fence between the Israeli-occupied side of the Golan Heights and Syria, Nov. 4, 2017. - REUTERS/Ammar Awad

Defense Minister Avigdor Liberman surprised everyone by dropping a bomb on the Cabinet table this week. Back in 2015, then-Defense Minister Moshe Ya'alon and Chief of Staff Gadi Eizenkot had agreed to Israel's defense budget as part of a multi-year plan to cover defense costs up until 2020. Liberman now insists that he needs an urgent injection of another 4.8 billion shekels ($1.4 billion).

The official reason given for this is "new threats" in the region. The unofficial reason being discussed by critics of Israel's defense establishment is that Israel has invested the lion's share of its money and efforts over the last few years contending with strategic threats in a third, more distant circle, while neglecting its first circle of defense. Israel's security doctrine is based on different strategies vis-a-vis the three circles of threats according to closer/more distant enemies.

Israel's working assumption has been that there will be no real land-based threats along the northern border (first circle) in the foreseeable future. But that assumption is now falling apart right in front of the country's leaders. As an earlier Al-Monitor article claimed, Israel was premature in delivering a eulogy for President Bashar al-Assad's Syria. Now, Syria is back, and it is not alone. It comes with a stronger, reinvigorated, better trained and more experienced Hezbollah, and the movement is more determined than ever. It also comes with Shiite militias, which accumulated combat experience under Iranian influence and also, apparently, under Iranian command. And we haven’t even mentioned the factories to manufacture missiles with precision accuracy that Iran is trying to set up in the region or the port and land bases that it is trying to build for itself in Syria and Lebanon.

As one Israeli Cabinet member told Al-Monitor on condition of anonymity, "We discovered that while we were all focused on the third circle, the first circle has come back to life." The main problem is that according to quite a few sources in the Israeli defense establishment, our land forces are ill-prepared to deal with the old-new challenges piling up against it.

Liberman's demand is based on a clause in the multi-year plan for defense funding: "This agreement will not be open to further negotiations unless there is an economic or security shift described by the relevant ministries [Finance and Defense] as major."

According to Liberman, the changes taking place around us are major-plus. "Assad won, and he now controls about 90% of Syria's populated territory," Liberman said in a briefing for military correspondents on Nov. 20. "He is starting to build up new divisions and brigades, including aerial defenses. The Syrian army is training more. They are better prepared, and there are more attempts to signal to us that they are ready to face us. They have SA-22 batteries, which are very effective weaponry, but they don't know how to use them yet."

There are several main concerns behind the Finance Ministry's stubborn opposition to Liberman's demands. In the past few years, the Israel Defense Forces (IDF) invested huge sums to prepare itself for the strategic threat posed by Iran. Deals such as the acquisition of F-35 stealth fighter jets consumed a large part of available resources, but they are irrelevant to the current situation. No one in Israel thought that the war in Syria would be over or even die down quickly in 2017, with a clear winner in the person of Assad, or that Assad would bring Iran, Hezbollah and the Shiite militias along with him.

The IDF is late in acquiring Namer APCs (armored personnel carriers) and equipping Israeli tanks with "Windbreaker" defenses to deflect the threat posed by 9M133 Kornet missiles. These missiles were responsible for numerous casualties in the Israeli Armored Corps during the Second Lebanon War in 2006. All in all, Israel's attitude toward Hezbollah has undergone a significant transformation over the past two years. It once considered Hezbollah to be a guerrilla movement that could do little more than annoy Israel with massive rocket attacks on the home front. In the last two years, however, Hezbollah has become a well-trained and hostile regular army with accumulated experience in important battles in Syria. Hezbollah is now capable of operating offensively and even of capturing territory on the Israeli side of the border.

The IDF has been keeping a tense watch on Hezbollah's Radwan commando units and on many developments in the group such as the short-range Burkan rocket — a sort of hybrid rocket with a warhead of 0.5-1 ton. In the past few years, Hezbollah also obtained unmanned aircrafts and even a small number of tanks and armored vehicles. The group is still light-years behind a real matchup with Israel's military might, and particularly with the Israeli air force. Still, Israel's superiority on the battlefield is no longer quite as absolute as it once was. The IDF may yet miss the days when Hezbollah fighters avoided real contact with Israeli forces, preferring guerrilla warfare from a distance as they did during the Second Lebanon War.

The second concern behind Liberman's demand for an immediate budget increase is the fact that the nuclear deal with Iran is no longer as stable and safe as it was under former President Barak Obama. Israel is paying the price for its success in convincing President Donald Trump to challenge the agreement and gnaw away at it. Right now, this is mostly verbal, but the Israeli defense establishment is no longer convinced that the agreement will last until its scheduled expiration date. There are other scenarios, including the collapse of the agreement or having one of the parties — either Iran or the United States — rebuffing it. If that happens, the strategic Iranian threat against Israel would immediately reappear on the list of current threats. Liberman believes that Israel must prepare itself and be ready to provide a response for this scenario, too.

It can be assumed that the main motivation behind Liberman's demand for additional funding can be found in the first reason above. Israel's failure to prepare for the victory of Assad and the Shiite axis is contributing to a loss of self-confidence. Furthermore, Israel also failed to convince the Americans not to abandon the region and not to cede it to the mercy of Russian President Vladimir Putin.

Jerusalem has been voicing serious disappointment now that Trump is allowing Putin to do whatever he wants in the new Syria. The warm embrace between Putin and Assad in Sochi on Nov. 21, the statement by Russia's foreign minister that an Iranian presence in Syria is legitimate, and the clear victory of the Shiite axis, which now stretches from the Persian Gulf to the Mediterranean Sea, are resulting in a chain of powerful responses from Tel Aviv and Jerusalem —Israel's defense and political echelons.

According to one of his associates who spoke on condition of anonymity, Liberman regularly jokes that "nothing good is threatening us." As 2018 approaches, the joke is on him. His tongue-in-cheek remark is coming true right before his eyes.