Why Israelis support Netanyahu despite scandals

Prime Minister Benjamin Netanyahu is still polling well despite the increasing entanglement of himself and his close associates in potentially criminal scandals. 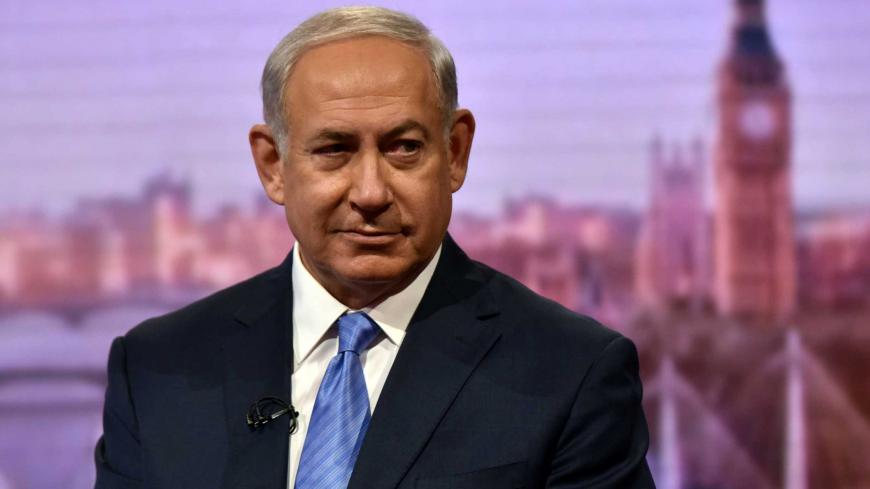 Israel's Prime Minister Benjamin Netanyahu is seen on the BBC's "Andrew Marr Show" in this photograph received via the BBC in London, Nov. 5, 2017. - Jeff Overs/BBC via REUTERS

Two of Prime Minister Benjamin Netanyahu’s closest associates, his personal diplomatic envoy Yitzhak Molcho and his family lawyer David Shimron, were detained this week in the context of an investigation into the Israeli purchase of German submarines suspected to have involved bribery.

The monthly Peace Index published this week by the Israel Democracy Institute and the Evens Program in Mediation and Conflict Resolution at the University of Tel Aviv indicates that the Israeli public is not naive. indicates that the Israeli public is not naive. A firm majority (58% of the Jews surveyed and 68% of the Arabs) do not believe that the various criminal investigations into the prime minister and his close associates are designed to unseat him, as Netanyahu and his allies keep claiming. A clear majority believes the prime minister should not be immune from investigation if warranted: 66% of the Jews polled and 86% of the Arabs oppose the so-called “French law” proposal that would preclude probes of serving prime ministers unless they’re suspected of a particularly egregious offense.

A July poll published by Maariv also shows that only 30% of those surveyed believe the claims by Netanyahu and his associates that the prime minister was not involved in the so-called “submarine affair” — compared with 55% who disbelieve the denials. A majority does not buy Netanyahu’s claim that the investigations by the police and the state prosecutor are the result of efforts by political rivals to depose him. Half of Israelis believe Netanyahu is corrupt. As expected, his standing in stronger among members of the right and of religious parties.

The submarine affair is shaping up to be a major corruption scandal reaching to the prime minister’s very doorstep. Even as the list of Netanyahu’s close associates linked to the scandal grows longer, progress has been made in the investigation of gifts allegedly received by the prime minister from wealthy businesspeople after Israel’s ambassador to the United States, Ron Dermer, was questioned by police regarding Netanyahu’s actions on their behalf. The prosecutor is also examining Netanyahu's possible indictment over an alleged quid-pro-quo “dirty deal” he cooked up with the publisher of Israel’s mass circulation Yedioth Ahronoth, Arnon Moses. Police suspect that Netanyahu asked for positive coverage in exchange for limiting the circulation of Yedioth’s competitor.

Meanwhile, lawyers for Sara Netanyahu will have a hard time convincing Attorney General Avichai Mandelblit to shelve her indictment concerning the household expenses of the prime minister's residence. In the best-case scenario for Benjamin Netanyahu, his wife will claim that the man who holds the fate of the state in his hands had no idea what went on under his nose.

This week, Israel’s Securities Authority announced that it had prima facie evidence to support suspicions against Netanyahu’s friend Shaul Elovitch, who holds the controlling interest in the Bezeq Telecommunications Company, and Shlomo Filber, personally appointed by the prime minister to run the Communications Ministry. Among other things, the two are suspected of fraud, breach of trust and obstructing legal proceedings. In July, the state comptroller revealed that when Netanyahu signed a conflict-of-interest agreement in 2015, after he insisted on naming himself communications minister, he forgot to report his friendship with Elovitch, one of Israel’s leading telecom tycoons. Netanyahu claimed that the only affiliation he has with the telecom market pertains to clients of his associates Shimron and Molcho. In this case, too, Netanyahu and his associates keep repeating the mantra “nothing will come of this because there was nothing” and accuse the comptroller of collaborating with the media to unseat an incumbent prime minister.

Yet polls show that if elections were held now, the prime minister would leave his two main opponents — Zionist Camp chair Avi Gabbay and Yesh Atid chair Yair Lapid — far behind. In response to a question put to them in a Channel 10 TV survey — “Who in your opinion is most suited to be prime minister?” — 28% answered Netanyahu, and Gabbay and Lapid got the backing of 11% each. In a similar poll conducted in July by Maariv, Netanyahu led with 26%, Lapid took 14% and Gabbay 12%. According to the pollsters and my colleague Mazal Mualem, if the Knesset elections were held today, the current governing coalition, the one whose members shelter a man considered by most Israelis to be corrupt, would remain in power.

One must be truly gullible or simply criminal to extricate Netanyahu, Molcho and Shimron from the entanglement they personally and intentionally created, wrote Ben-Yair, adding, “I find it hard to believe that crucial official positions are filled by gullible people or by those breaching Israel’s trust and the public interest.” Indeed, there are quite a few wise people in such positions who protect the interests of the state and the public. But what about the Israeli public? How is it possible that a person who is at best “only” a liar, inciter and greedy hedonist manages to lure millions of people astray like the Pied Piper of Hamelin?

If we accept the diagnosis offered Nov. 4 by former Prime Minister Ehud Barak, that the public is not stupid, we are left with the possibility that when people wake up every day to headlines of corruption scandals, moral corruption does not trouble their sleep. The next stage, which is drawing near, is for the citizens of Israel to re-elect a criminal as their leader and entrust their fate to him. A larger and far stronger democracy recently chose to be led by a man of dubious integrity, a liar, inciter, and greedy hedonist. Israelis love him.