Inside the world of social media advertising in Iran 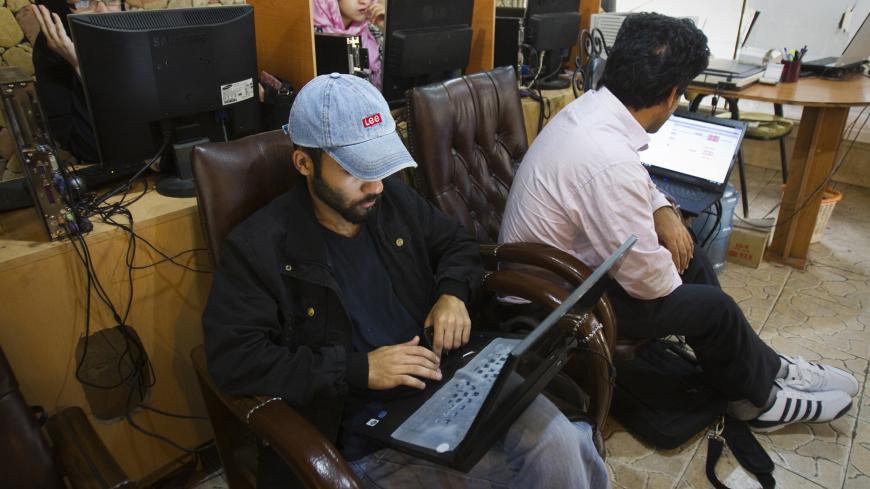 Customers use computers at an internet cafe in Tehran, Iran, May 9, 2011. - REUTERS/Raheb Homavandi

Fatemeh sits in the driver's seat of the car with a PlayStation 4 on her lap. “Happy Birthday,” she shouts at her husband as he hops in the car. Mohamaad is ecstatic and asks if his wife got him games, too. She answers, “No, I don’t know what games you want, but you can go to the Play Store and get them yourself!” In the next scene, we find Mohamaad dancing to a Persian song on his way to Tehran’s Play Store. This is one of the many quirky advertising videos Fatemeh (@1fatemeh_arjmandi) and Mohamaad (@mohamaad_vf) post on their Instagram accounts. The adorable Iranian online celebrity couple has over 930,000 followers and offers ad space in the form of videos for everything from online retail stores to video game shops while adding a tinge of Iranian humor.

Farhad, a sales and marketing expert based in Tehran, explained to Al-Monitor that this couple isn't the only Instagram influencer. Other online celebrities, such as Mohammad Amin Karimpour (@mohammadaminkarimpour), also post silly videos and offer ad space. “For about 40 million rials [$1,137], you can get them to post a video with your product, which gets the privilege of being shared among people via Telegram and Instagram,” said Farhad. “But on Instagram accounts, such as Palange Irooni or similar, they charge 1,000 rials (35 cents) and oftentimes delete the post after two hours.” Scrolling through Palange Irooni's entertainment account (@Palange_Irooni), which has over 1.1 million followers, you’ll find ads posted for everything from dentistry and diet pills to designer watch stores.

Other Iranian entrepreneurs use Instagram accounts to promote their brands and products. Tezar Plaza (@tezarplaza) is an online shopping retail store that caters to Tehran’s elite and promises original designer goods — everything from Christian Louboutin to Chanel — sold at a 20% markup and with a 3- to 14-day delivery guarantee from Europe. Tezar Plaza opened in 2012 in the Fereshteh neighborhood, known as the Beverly Hills of Tehran, but for the past two years, owner Hamed Qmarsy has moved his shop online. “I realized that I’m a lot more comfortable doing orders online,” Qmarsy told Al-Monitor. “Some like working in a store, but I prefer doing it from home.”

Tezar Plaza is one of thousands of online shops using Instagram. The list of products and services range from makeup artists, nail technicians, tattoo artists, designer goods and evening gowns. There are dozens of online shops dedicated to fashion alone. Iranians traditionally relied on the maison (house), a private retail space often located in a home for shopping. Maisons have been around for decades, mainly because of international sanctions on Iran, and to provide the comfort of shopping sans hijab. They also provide opportunities for Iranian designers to debut original fashion designs without the hassle of paying high rent for storefronts. Since the 2015 nuclear deal, high-end fashion brands such as Escada and Roberto Cavalli have opened shops in Iran, but not everyone can afford Western prices for original designer brands.

Before social media, maisons heavily relied on word-of-mouth to get their homegrown businesses running, oftentimes with lebaseh mavarayi (Western clothes or, literally, satellite clothes), traditionally imported in suitcases from Turkey and France and sometimes from as far as the United States. With the growth of social media, these Iranian entrepreneurs can now post their work or products on Instagram as well as the messaging app Telegram. Anargol — known for its trendy manteaus, shawls and scarves — told Al-Monitor in 2014 that a large part of its success was thanks to social media.

According to the Minister of Culture and Islamic Guidance, there are currently 47 million active social media users in Iran. That’s more than half of the country’s 80 million population. Although Instagram remains popular, Telegram has dominated the country’s social media market for the past two years. Iranians have created over 100,000 channels on Telegram based on their interests, and they spend hours reading, sharing pictures and videos, and conversing about entertainment, news and sports — including their national pastime: politics. As a result, Telegram reportedly consumes 40% of the country’s bandwidth.

The top 10 Telegram channels in Iran have between 800,000 to more than 2 million members. Naturally, their managers capitalize on the accounts to earn money with advertising, similar to online influencers in the West. Techrasa reported that these channels charge based off reputation, line of work and the number of members — prices range from about 2.5 million rials to 4.4 million rials ($70 to $125) on average to post an ad that lasts for only two hours before it is manually removed.

The E-commerce Development Center of Iran claims the revenue of online shops with payment gateways such as Digikala — an e-commerce company worth over $150 million — amounted to $18 billion in the past year. That number doesn’t even account for sales on Instagram and Telegram. While the Iranian government is well aware of these statistics, it hasn’t stopped officials from debating the possibility of filtering Instagram in the same manner it has with Facebook and Twitter.

For years, hard-line Iranian officials have launched campaigns to block access to Telegram; this has complicated the government’s plans for censorship. In September, a lawsuit was filed in an Iranian court against the CEO of Telegram, Pavel Durov, accusing the app of providing service to terrorists and spreading immorality through child pornography, human trafficking and drug usage that can be seen on the app. Durov responded to the allegations on Twitter, saying that his company blocked thousands of channels and chats with porn and terrorist content daily in Iran, and that the Iranian government really had different reasons for wanting to block access to Telegram. Durov later tweeted that “Iranian officials want to use @telegram to spy on their citizens. We cannot and will not help them with that.”

The future of online advertising and shopping is murky, but one thing is certain: Iranians will just migrate to another messaging app to continue what they’re doing if the government succeeds in shutting them down.

Still, in this age of high-tech shopping, there are still people who prefer brick and mortar stores. Sahar, from Esfahan, told Al-Monitor that she often made purchases via Instagram. “I’ve bought shoes, CDs and even toys for my 5-year-old daughter,” said Sahar. She explained that while she and her friends and family like to shop online, they don't yet trust the system entirely when it comes to quality and return policies. “I think most people still prefer actual stores,” she added.