Absent political will to engage in genuine reform, Iranian women face a long road ahead in achieving their rights. 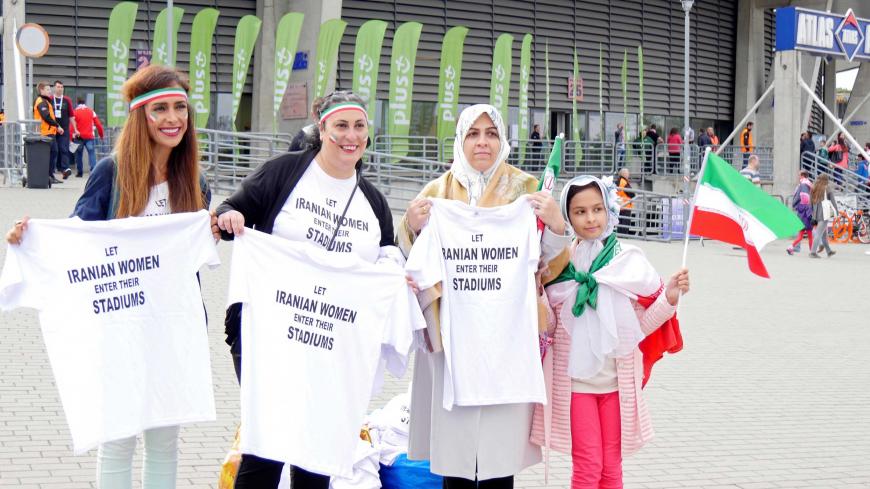 Women hold T-shirts as they protest for Iranian women's rights to enter stadiums in Iran, ahead of the FIVB Volleyball World League match between Poland and Iran, at Atlas Arena in Lodz, Poland, June 17, 2017. - REUTERS/Parham Ghobadi

Saudi Arabia attracted significant media attention when it announced that it would finally allow women to drive as of June 2018. It was also announced later that women will be allowed into some of the country’s sports stadiums next year. Many have since drawn comparisons between Saudi Arabia and Iran, where women have long been allowed to drive but face difficulties entering stadiums. What is common between the two neighbors is that the status of women is defined by traditions and religious practices sanctioned by law. Where things now appear to diverge is that Saudi Arabia seems willing to challenge what has long been the norm at a faster pace.

Discriminatory attitudes toward women in the private and public spheres have long existed in both Iran and Saudi Arabia. This extends to most areas of public life, including education, political activities and employment.

While reforms in Saudi Arabia are relatively new, the women’s movement in Iran dates back a century, after the Constitutional Revolution of 1906 propelled Iran into a new era. But there are still lessons for Iran to learn from the Saudi experience.

As an attorney and lawyer who practiced in Iran, my priority has always been that of assisting women in finding creative avenues to assert their rights, particularly where the government and existing legislation fail to protect them. Personal experience shows that law and culture can work hand in hand to shed light on the plight of women’s rights. But so does the political will of the ruling authorities, which plays an important role in reforming laws that discriminate against women.

The recent move toward reforms in Saudi Arabia is a clear sign of the political will of the Saudi government to change the face of the country when it comes to half of its population. Central to the reforms has been the apparent break between the state and hard-line clerics. To move ahead with its reforms, the kingdom understands that it has no choice but to part ways with such voices and rather move to more tightly control them. This has not been the case in Iran, where a strong connection between hard-line clerics and the ruling authorities still persists. Of course, one cannot separate religion and tradition from either society. But the two have much to learn from each other’s experiences with reform.

In Iran, advancement of women’s rights was state policy under the ousted Shah Mohammad Reza Pahlavi. Like King Salman bin Abdul-Aziz Al Saud of Saudi Arabia, the last Iranian monarch was not a supporter of feminism, but believed that development was impossible without the full participation of women and a complete change in their social status. Indeed, despite opposition by the clergy, the legal status of women improved during the Shah’s rule (1941-1979).

After Iran became an Islamic Republic, women were once again sidelined in Iran, losing most of the rights they had achieved. For instance, women lost equal rights in family matters — including divorce, marriage settlements and the custody of children.

Iranian women’s struggle to bring the country’s laws in line with social realities is an ongoing process. Despite periods of intense bargaining and large-scale campaigns, which receive popular support even from within the complex echelons of the Islamic Republic’s political elite, the underlying political-legal framework has resisted this round of efforts to bring about tangible change. There are many reasons to explain these challenges in Iran. But the real issue is the various interpretations of Sharia and, more important, the resistance of the conservative establishment to significant improvements in the status of women.

The One Million Signatures Campaign was launched in Iran in 2006 by women’s rights activists to put an end to discriminatory laws. Given the closed nature of the Iranian state and the major restrictions placed on political and social activism, the campaign’s goal of creating a mass movement was seen as a direct threat from the outset.

The campaign faced huge challenges, including the arrest and imprisonment of its members. In fact, membership in the campaign became an excuse for the arrest of many activists. Newspapers and magazines that promoted equality were banned, and the campaign’s website was blocked by the authorities several times.

The hard-liners in the government mistakenly saw the campaign as a political opponent and worked to control, confront and repress it. Yet the campaign explicitly announced its major aim: to change the laws that discriminate against women in Iran. These do not include constitutional provisions, but just a focus on changing provisions in civil and criminal codes.

Strong opposition shown by Iran’s religious and conservative establishment to change or amend the codes has decreased the likelihood of any substantial positive reforms for Iranian women in the foreseeable future.

That is why, irrespective of whether a moderate president or a government of another persuasion becomes involved in the advancement of women’s rights in Iran, the main objective of the women’s movement should be that of securing the government’s support and making use of this backing in order to lobby more senior centers of power, such as the supreme leader of Iran (who holds ultimate power), to relent on restrictions on women’s rights.

Saudi Arabia appears to have opened up opportunities for women by realizing that the country cannot advance until women’s rights are improved in the kingdom. But it is clear that in the case of Iran, women are unlikely to be able to effectively continue the advancement of their rights until religious figures change their outlook toward women and the government demonstrates political will to engage in such reforms, too.