Saudi Arabia seeks to turn back clock on Iran

The debacle surrounding the resignation of Lebanon’s prime minister amid growing Saudi hostility toward Iran suggests a coming showdown in the region. 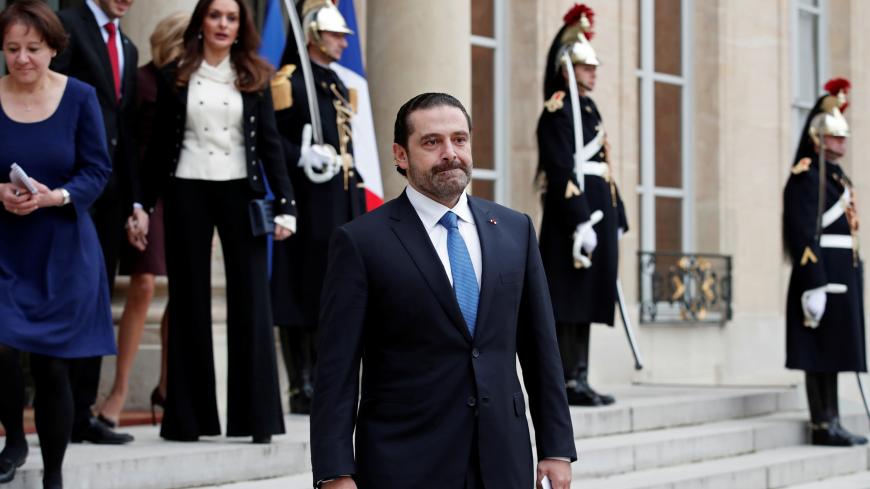 Saad Hariri, who announced his resignation as Lebanon's prime minister while on a visit to Saudi Arabia, is pictured at the Elysee Palace in Paris, France, Nov. 18, 2017. - REUTERS/Benoit Tessier

The abrupt resignation of Lebanon’s Prime Minister Saad Hariri during a trip to Saudi Arabia earlier this month and the events surrounding his presence in Riyadh appear to have increased Iran-Saudi tensions and brought to the fore the possibility of a new military confrontation in the region.

The recent developments come just over one year after the deal that ended a 2½-year political vacuum in Lebanon, whereby former army commander Michel Aoun became president and Hariri prime minister. Yet it seems Lebanon is once again entering a new crisis, and once again with the seeming hallmarks of foreign interference.

Hariri’s odd resignation on Nov. 4 on foreign soil— particularly that of Saudi Arabia — has dealt a major shock to Lebanon’s political system. In his resignation speech, Hariri said his decision was due to Iran and Hezbollah’s meddling in Arab affairs and creating instability in Lebanon.

Regardless of the circumstances surrounding Hariri’s mysterious trip to Saudi Arabia, or whether or not the various reports about him having been held against his will are true, there are several important issues to consider.

Whether Hariri wrote his resignation speech himself is questionable. However, what is certain is that the language used in his speech was very favorable toward Saudi Arabia. In fact, Hariri’s choice of words seemed very similar to previous speeches delivered by Saudi Minister of Foreign Affairs Adel al-Jubeir and Saudi Crown Prince Mohammed bin Salman regarding Iran’s role in regional issues.

Iran’s reaction to Hariri’s resignation was rather different. In a series of tweets on Nov. 6, Iran’s Foreign Minister Mohammad Javad Zarif described Hariri’s resignation as bizarre and linked it to US President Donald Trump’s trip to the Middle East earlier this year as well as the October visit to Saudi Arabia by Trump’s son-in-law, Jared Kushner.

This is while on Nov. 14, Ali Akbar Velayati, the foreign policy adviser to Iran’s supreme leader, described Hariri’s resignation as a “domestic issue” of Lebanon. He did, however, emphasize that “everyone realized today that Mr. Hariri resigned under Saudi pressure.”

It should be borne in mind that when the United States invaded Iraq in 2003, Saudi Arabia saw a change in the regional order that was to its disadvantage. In the years since, Riyadh has tried hard to alter this perceived imbalance. The developments in Syria, the events in Lebanon, Saudi Arabia’s long lack of interaction with Iraq and the severing of ties with Iran, the cutting off of relations with Qatar and the war on Yemen all took place with the intention of changing the regional balance of power to Iran’s disadvantage.

In this vein, former Iranian Ambassador to Jordan Nosratollah Tajik told Al-Monitor, “The way in which Hariri resigned was all wrong, whether in terms of time or location. This resignation took place under Saudi pressure and illustrated Riyadh’s intention to clash with Hezbollah — a group that has played a direct role in fighting terrorism in the region.” He added, “Saudi Arabia is trying to disrupt the recently calm political scene in Lebanon and blame it on Hezbollah. I doubt this will happen. Considering the strategic mistakes that Saudi Arabia made in Lebanon, its strange invitation to Hariri to visit Riyadh and not letting him return to Beirut, the political groups in Lebanon are now seeing Riyadh’s true face.”

Although various political groups in Lebanon have attempted to return Hariri to Beirut, he appears to only be planning to do so via Paris and Cairo. Hariri spoke publicly for the first time since his resignation on Al Mustaqbal Television Network on Nov. 12. However, the strange events that happened during that interview, from Hariri repeatedly drinking water to a man who was briefly seen in a corner, holding a paper in his hand, have all added to the rumors about his situation in Lebanon.

Yet Saudi Arabia continues to threaten Iran. Adel al-Jubeir on Nov. 16 warned that Riyadh’s patience is running out in regard to Iran and that Saudi Arabia would respond to Iran’s animosity.

Meanwhile, on Nov. 16, Israel’s military chief Lt. Gen. Gadi Eizenkot gave an unprecedented interview to a Saudi newspaper underlining the ways in which the two countries could unite to counter Iran’s influence in the region. The Israeli official said Tel Aviv had no intention of attacking Hezbollah but would also not tolerate a strategic threat to its borders.

Azizollah Hatamzadeh, an analyst in international affairs and the Middle East, told Al-Monitor, “Despite Saudi Arabia’s strong desire to disarm Iran’s military and thereby reduce its regional influence, it seems that Riyadh will need the support and cooperation of the United States and Israel to make this a reality. Without their cooperation or green light, it will not do this. Clearly, Israel will welcome such a move, but it does not want to pay any costs either. The United States, however, is against a military option against Hezbollah since it believes that such a measure would lead to a weakening of Lebanon and a civil war in that country and lead to no significant achievement. Nonetheless, Donald Trump himself has openly defended … Salman’s decisions in his tweets.”

What is clear is that Saudi-Israeli cooperation and unity regarding Iran and Hezbollah will be expressed more transparently in the coming days. This axis, by relying on each other, is trying to change the regional balance of power to its benefit and to Iran’s disadvantage. But will Saudi Arabia and Israel’s unsuccessful experiences in Yemen and Lebanon respectively prevent the two from starting another war? Although the answer is not clear, Trump’s full backing of the young Saudi crown prince’s ambitions may encourage Riyadh and Tel Aviv to revisit the idea of changing the regional balance of power and starting a new war in Lebanon in order to stand against Iran.