An increasing number of foreign visitors enter Iran to either undergo medical treatment at specialized hospitals or to make use of traditional medicine. 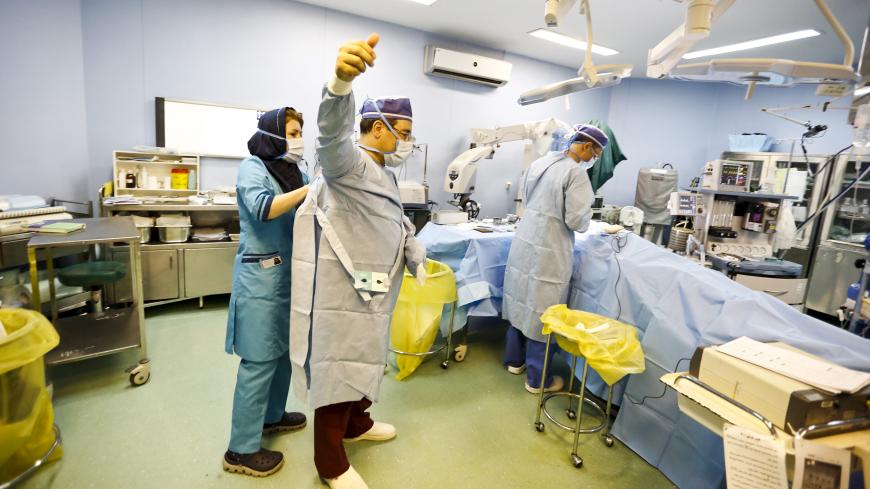 Iranian surgeon Ali Manafi puts on his sterile gown before performing nose surgery on a female patient in the operating room at a hospital in Tehran, Iran, Aug. 19, 2015. - REUTERS/Raheb Homavandi

TEHRAN, Iran — Tourism is nowadays at the core of attention of many governments across the world because of its major contribution to social and economic development. As the World Tourism Organization states, the business volume of tourism equals and sometimes surpasses that of crude oil exports.

Such facts, along with possessing numerous tourism attractions — including UNESCO-designated World Heritage sites — have prompted Iran to step up efforts to boost its tourism industry, particularly under President Hassan Rouhani.

To achieve this aim, the Rouhani administration has taken measures that mainly focus on creating better conditions to attract foreign tourists in addition to showcasing Iran's historic and natural attractions.

In this respect, the development of medical and health tourism has been put on the agenda on the grounds that the country enjoys diverse climate conditions, natural resources such as hot and cold mineral springs, and different types of medicinal herbs. Geographical proximity along with high-quality medical services at low cost in comparison with developed and regional countries have also contributed to reasons behind the government’s decision to bolster medical and health tourism.

In this vein, inclusive measures — such as holding medical tourism exhibitions in other countries and signing memorandums of understanding with 32 countries to host representatives from Iran’s leading company (HEGTA) in charge of health tourism to help facilitate travel of foreigners to Iran for medical purposes — have been taken. The holding company, affiliated with Iran’s Social Security Organization, is also conducting a major medical tourism plan that in its first phase involves the participation of 22 hospitals — five of which are private.

In terms of infrastructure, measures taken so far are divided into two sections: those in major cities, and the others in border areas such as free economic zones. Projects in major cities include a hotel hospital in the capital city of Tehran, which is the largest in the Middle East. The complex, now operational, has 100 beds and 100 suites to accommodate patients’ companions. To the south of Tehran, a health care complex dubbed Healthcare City is underway in the historic city of Isfahan. The project consists of four phases and is estimated to cost $260 million. The first phase became operational in late October, offering services such as beauty treatments and traditional medicine. In the northwest, the private sector is constructing a hospital in the city of Urmiya in which nearly $260 million has been invested so far, and almost the same amount is still needed to complete the project, which will become Iran’s first smart hospital capable of being connected with similar hospitals in the world.

This is while infrastructure projects in border areas mainly involve the construction of medical centers. In this regard, free zones have been paid special attention as they enjoy competitive factors such as sharing borders with neighboring countries, easier transit and lack of visa-related issues. The Persian Gulf island of Kish has made progress in medical tourism by offering visa-free medical services and possessing well-equipped medical centers and proper accommodations. Although other free economic zones such as Aras in the northwest and Arvand in the southwest are not as advanced as Kish, measures have been taken in these regions as well. On Oct. 28, Esmail Zamani, head of the Arvand Free Zone, said the region will soon make its first visa-free health tourism center operational. "[The neighboring Iraqi city of] Basra with a population of 5 million is of special importance. Citizens of Basra would be able to travel to the [Arvand] free zone by land and receive medical services or other services available and then return home,” Zamani was quoted as saying by local media.

According to Zamani, more than $230 million has been invested to develop infrastructure in Arvand Free Zone over the past three years, while foreign and Iranian private sectors have also made a $1.3 billion investment in the same period.

Speaking to Al-Monitor, Mohammad Nasri, the CEO of one of the licensed travel agencies active in health tourism, said, “The majority of our patients are from the UK, Australia, Iraq, Canada, Pakistan, Jordan, Bahrain, Germany, Qatar, [the United States] and India.” He added, “Rhinoplasty, IVF, hair transplants, weight-loss surgeries, dental treatments and eye care are the top inquiries of our patients, in order.”

According to the Health Ministry, 105,000 inbound tourists visited Iran for medical purposes during the last Iranian year (which ended March 2017), bringing $588 million in revenue to the country — up from $350 million in 2012. This is while earlier in the year, Mohammad Panahi, vice president of the Association for Development of Medical Tourism Services, said the country’s revenues from health tourism were around $1.2 billion in 2016 without mentioning the number of medical tourists who had visited Iran.

One reason behind the contradicting figures is the country’s visa procedure. Although Iran issues visas on arrival to citizens of over 180 countries, it requires health tourists to apply for a special visa. Since a great number of medical tourists travel to Iran independently or through unauthorized agents, they’re not counted as medical tourists in official data.

Based on Iran’s Sixth Economic Development Plan (2017-22), the number of health tourists must increase to up to 600,000 every year. Also, by 2025, Iran plans to increase revenue from health tourism to $2.5 billion. Despite all the advancements in recent years, the set targets seem difficult to reach, as there are challenges that need to be addressed.

To help better manage health tourism affairs, the Health Tourism Council was formed two years ago. However, as Cooperatives Minister Ali Rabie stated back in August, lack of integrated management along with insufficient advertisement is still hampering activities in the health and medical tourism sectors. In the meantime, Health Minister Hassan Ghazizadeh Hashemi believes that the nonmedical sectors are the main challenge. “Medical society currently enjoys required skills and scientific capabilities,” he told the IRNA news agency Oct. 14, adding, “The medical industry is not the problem now. Other issues must be addressed such as hotels, passenger transportation, flights and particularly visa-related affairs.”

An insufficient number of approved travel agencies and hospital and medical centers to accept foreign patients along with unauthorized agencies and middleman is also among existing problems. If the country is to meet its planned targets in health and medical tourism, it is widely believed among officials and experts alike that more needs to be done. Such a necessity becomes more highlighted when rivals like neighboring Turkey plan to become the world’s second hub for health tourism by 2023 — and Turkey has already taken measures to advertise its health tourism and thermal tourism in at least 40 countries.