An Egyptian pharmaceutical company launched a campaign that highlights low-cost treatment to hepatitis C patients from all over the world as part of efforts to promote medical tourism to the country. 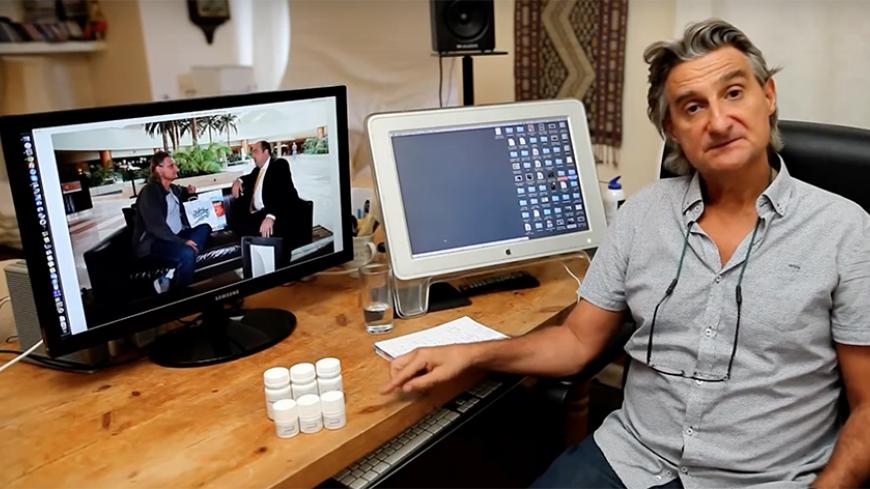 A still from a video in which English documentary filmmaker Tim Coleman talks about his experiences traveling to Egypt to receive medical treatment, June 12, 2016. - YouTube/Tour n' Cure

“Tour n’ Cure, what are you waiting for?” With these words, English journalist and documentary filmmaker Tim Coleman ended a video message June 12, in which he relays his journey to being treated for the hepatitis C virus in Egypt, after having contracted it over 30 years ago.

Coleman said in the video that his particular treatment in England with what are being called revolutionary drugs would cost 120,000 British pounds (roughly $152,000) and that he has sought to get free treatment from the English National Health Service (NHS), but still has not received it. He said that during a trip to Cairo, he saw the Tour n’ Cure campaign ad and found out that the Egyptian campaign offers a complete course of hepatitis C medication for no more than 1,200 pounds ($1,500).

He said that he received free treatment in Egypt with the new drugs for six months starting Feb. 15, and feels much better.

He had applied to be treated under the NHS program in 2015. In part because the treatment is so expensive in Britain, NHS England is rationing care. It is planning to fund 10,0000 hepatitis C courses annually, although 160,000 people are estimated to have the disease in England. A 12-week course there can cost up to around $50,000; some patients require more than one course.

The Tour n’ Cure is a campaign that Prime Pharma, a private Egyptian pharmaceutical company, launched May 24 after six months of promotional efforts to revive therapeutic tourism in Egypt. According to the official website of the campaign, it started its activity by attracting hepatitis C patients from around the globe and offering them low-cost treatment and a one-week sightseeing program.

Tamer Wajih, the chairman of Prime Pharma, told Al-Monitor, “Researchers at the company succeeded in innovating low-cost therapeutic protocols with 97% cure rates instead of relying on imported medication reaching $100,000 per treatment regimen.”

According to a recent field survey conducted by the Egyptian Health Ministry in December 2015, the number of Egyptian citizens with hepatitis C is estimated at 3.6 million, or 4.4% of the population.

In October, the World Health Organization held an event that celebrated the treatment of 1 million patients in low- and medium-income countries in 2015 and 2016 under the new treatment regimen. Qadri al-Said, the CEO of the Egyptian National Committee for the Control of Viral Hepatitis, said in his speech during the event that this figure included 830,000 Egyptians.

Wajih said that Egypt’s success in developing a cure for hepatitis C, in addition to the five-year period needed to register the medication in European markets, have made the therapeutic tourism campaign inevitable. The aim is to extract the most economic benefits by offering a treatment and an entertainment program that costs 4,900 euros ($5,200) at most, including the cost of medication.

Wajih added, “We want to bring in 100,000 patients in 2017. The campaign seeks to turn the spotlight on Egypt as the world healer of hepatitis C, so that patients would need to come to Egypt. Besides, the patient’s daily expenditure would exceed that of a tourist visiting Egypt only for tourism and opting for the cheapest choices. Tour n’ Cure packages include residence in five-star hotels, direct flights and daily leisure tours.”

Wajih detailed the steps that a patient must take before deciding to travel to Egypt: The patient must provide the campaign with the home country's test results so that the medical team can look into the case and assess whether the patient is eligible for treatment in Egypt. According to him, the medical team is focusing on countries that are relatively close to Egypt geographically, such as Spain and Italy as well as England, as they have a high number of hepatitis C patients. He said, “The citizens of these countries know Egypt well. They can easily be persuaded with the quality of touristic and therapeutic services we offer."

Wajih emphasized the complete coordination between the campaign and the relevant ministries, namely the Civil Aviation, Health and Tourism ministries. He said that Minister of Health Ahmed Emad El-Din Rady suggested using the state hospitals and labs, but the campaign had already signed contracts with private labs and hospitals.

Wajih expected the campaign to expand its activity to include cancer patients. He did not seem worried about foreign patients’ treatment in public hospitals.

In this regard, the director of the Therapeutic Tourism Department at the Ministry of Health, Abdelati al-Manai, told Al-Monitor, “The Health Ministry has been capitalizing on the infrastructure of some public health facilities and on the skills of Egyptian medics to attract patients from Arab and African states.” Wajih said this doesn't mean he doesn't trust public hospitals, but that they opted for private hospitals to give patients the most appropriate medical service in Egypt.

The Tour n’ Cure campaign chose Cairo as a starting point for its activity. Wajih said that the capital abounds with human resources and medical facilities. He said that patients could be welcomed in Sharm el-Sheikh hotels if the influx exceeds the capacity of Cairo’s facilities.

International soccer players are also promoting therapeutic tourism in Egypt. Wajih said, “The campaign has teamed up with FC Barcelona’s striker, the Argentinian Lionel Messi, to launch the initiative from Cairo to ensure the right of hepatitis C patients to receive low-cost treatment.”

The head of the Egyptian Tourism Activation Authority, Hisham al-Demiri, told Al-Monitor over the phone that he fully supports the campaign and that his committee is trying to promote therapeutic tourism in Egypt. He asserted that this sort of tourism is popular around the world, and that it can attract foreigners who are not used to visiting Egypt for tourism purposes. The aim is to help Egypt’s tourism sector to overcome its current stagnation.

The tourism sector in Egypt has been stagnating for five years. According to the Central Agency for Public Mobilization and Statistics, 506,200 tourists visited Egypt in October 2016 as opposed to 909,400 in October 2015 — a 44.3% decline. The economic performance indicators that the Ministry of Planning issued in early December showed that the tourism sector witnessed a 28.7% decline during the 2015-16 fiscal year, while it had achieved a 19.5% growth in the preceding fiscal year.

Demiri said, “People traveling for treatment do not come alone. They are often accompanied by family members. During and after the treatment, they get the chance to discover Egypt, and they might be interested in visiting again even after being healed.”

On whether the campaign can bring 100,000 patients to Egypt in 2017, Demiri said, “Egypt is new to the therapeutic tourism sector, and it is still in the promotion phase. The committee has not assessed the outcome of the promotional campaigns yet.”

He concluded that some European tourism companies in Spain, Belgium and the Netherlands are interested in the medical treatment programs in Egypt.