From developing infrastructure to expanding marine tourism and easing visa issuances, Iran is increasingly focusing on its underdeveloped tourism sector as US sanctions are reimposed. 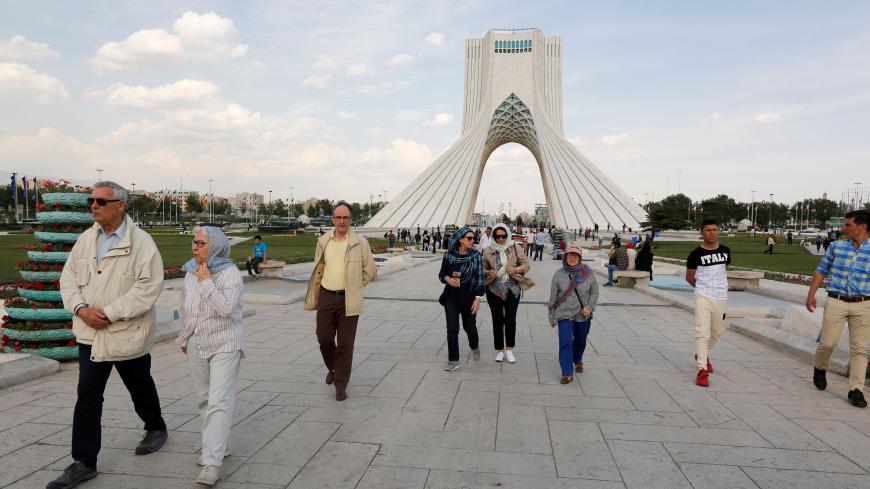 As another round of broad US sanctions against Iran is set to be implemented, the Islamic Republic is redoubling its efforts to boost its underdeveloped tourism sector through new initiatives and accelerating the finalization of nascent measures.

The psychological effects of the return of US sanctions and underlying structural weaknesses in Iran's economy have jointly acted to send the national currency into a tailspin in recent months. But a weak rial also means cheaper travel for foreigners, prompting Iran to snatch the opportunity to both ease pressure on its hard currency reserves and also to combat US efforts to isolate the Islamic Republic.

Marine tourism has proven an especially effective target for development in recent months. Starting Sept. 23, the Swedish-made Sunny — Iran's only cruise liner — commenced operations between the southern port city of Bandar Abbas and Sharjah in the United Arab Emirates. A result of private investment, the Sunny in March 2017 became the first Iran-owned ocean liner to touch the waters of the Persian Gulf since the 1979 Islamic Revolution. It can carry 420 passengers and takes trips that last about 11 hours — at prices cheaper than air travel — and carry export containers, too.

On Sept. 28, a marine route was also established between the southwestern Iranian port city of Khorramshahr and Basra in neighboring Iraq. The establishment of the route, which is aimed at improving bilateral ties through religious tourism, was accelerated in order to be able to offer services in time for the Arbaeen pilgrimage, which has attracted some 2 million Iranians to Iraq.

Given Iran’s access to both the Persian Gulf and the Sea of Oman, it has further plans to utilize its geographic potential. For one, local authorities have said in recent weeks that a plan to restart a recreational sea line between Bandar Abbas and Oman's Khassab is close to finalization. Private sector cooperation is again key here — especially since Iran-Oman trade ties have only warmed this year. The Sunny is expected to service this line as well once the route begins operation. Meanwhile, authorities are preparing infrastructure in the southern port of Bushehr, a key city in development of trade ties with Qatar, to restart a passenger sea line to Doha by the end of the current Iranian year in March. The aim is to expand the line to be able to take passengers to ports in Saudi Arabia and Bahrain as well in the near future.

Ambitious plans are nearing implementation to the north as well. Iran wishes to establish sea routes for both passengers and cargo with other Caspian Sea littoral states. Russia, which appears to have found more reasons to strengthen ties with Iran after the US withdrawal from the Joint Comprehensive Plan of Action, is a major piece of that puzzle. Reza Masrour, CEO of the Anzali Free Trade Zone in northern Iran, a district hosting dozens of Russian companies, said the Anzali-Astrakhan tourist sea route will become operational by March as a designated vessel is being constructed. There has also been talk of activating sea travel to Kazakhstan and Turkmenistan for the past year, though no tangible results have been reached.

To the southeast, Iran and Pakistan are also eyeing marine connections. The aim here is mostly to capitalize on the thousands of Pakistanis who travel to Iran for religious tourism, to shop in local markets or to travel on to Iraq. Much of the plan has been finalized as Iran's Chabahar and Pakistan's Gwadar are already sister ports based on a previous agreement.

To further incentivize foreign tourists to visit Iran, and also to propel domestic tourism, Iranian authorities are increasingly paying attention to the development of local markets. A prime example of this endeavor can again be seen in the southern provinces with access to the Persian Gulf. For instance, Hormozgan province is home to 14 islands and is boosting its tourism sector through the construction of recreational piers and cruises, maritime sports facilities, high-end beaches and swimming areas as well as marine and beach stays and restaurants. Marine tours will also take tourists on diving tours. Travelers will be able to see unique sea turtles, venture into untouched nature, visit a crocodile park and have access to extensive traditional bazaars featuring local handicrafts, among other things.

Beyond activating travel routes and infrastructure, which also include the construction of dozens of five-star hotels in the coming years and offering cheap loans and tax incentives to industry players, Iran has executed initiatives to make foreign travel easier.

Most importantly, the Islamic Republic has concocted a direct response to the much-contested US travel ban, which either outright prohibits or severely restricts entry to the United States for anyone who has visited Iran. Indeed, foreign tourists who visit Iran no longer have their passports stamped per a scheme that has been in effect since Sept. 23. Meanwhile, Iran is granting visa-on-arrival facilities to nationals of all except 10 nations (with US citizens on the latter list). Iran has also waived visa requirements for citizens of 10 countries who may stay in Iran for various designated time periods. Omanis are the latest to be granted visa-free access, a move that is expected to help Iran's health and medical tourism sector the most. Waiving visas for group tours coming from China, Iran's top trading partner, is on the agenda. Lastly, the head of Iran's Tourism Organization, Ali Asghar Mounesan, announced Sept. 26 that short-term transit tourists will soon be offered 72-hour free-of-charge visas to enter the country.

Official figures appear to show that the combined effect of all these initiatives is positive. Mounesan said some 3.14 million foreign tourists traveled to Iran from March 21-Aug. 22 — 45% higher than the corresponding period last year. This could signify a promising jump-start to an immensely underdeveloped sector that saw only 5.11 million visitors enter the country during the last Iranian year, even as Iran is home to a rich ancient culture and 23 UNESCO heritage sites among many other attractions.