A young Palestinian hikes and bikes around Gaza to explore its cultural and historical heritage and landscape and share its beauty and traditions with others. 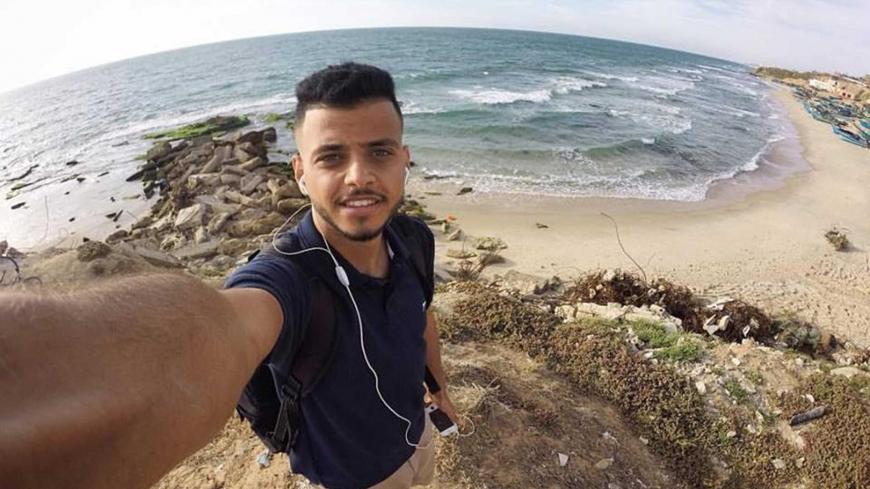 Abd al-Rahim al-Zraiee during his bicycle tour of Gaza, image uploaded May 28, 2017. - Facebook/Gaza.Tourist

A backpack, camera, tent, bicycle and social media platforms are all the equipment Abd al-Rahim al-Zraiee needs to reveal hidden gems in Gaza that even local residents might not know. The young Palestinian is known on social media as the Gaza Tourist. Through his travels — which are posted to Facebook, Instagram and Twitter — Zraiee documents the territory’s history and seeks out its beauty.

Zraaie set out on his first tour about a year ago, exploring his own hometown, Deir al-Balah, a historical city in central Gaza. “What motivated me to start this initiative is my wanderlust and passion for discovering new places, meeting new people and understanding different cultures, traditions and rituals,” Zraaie told Al-Monitor. “I started traveling around Gaza and documenting my tours through photos and short comments. I focused on dusting off our archaeological sites and presenting Gaza’s beauty, which still remains despite the wars and crises it has experienced.”

Zraaie said he also wanted to learn more about Palestinian heritage, from archaeological sites to history to local traditions. “I wanted to show the world the sublime beauty and history of Gaza,” he said. He therefore created the Facebook page Gaza Tourist. With time, and a few trips, it has become a gallery of photographs, videos and stories.

The young documentarian has visited more than 80 locations in Gaza. “Unfortunately, a lack of equipment prevented me from taking many pictures,” he said, referring to when he first set out on his tours. He explained that he does not follow a set protocol or try to predetermine a route in deciding on his next destination. He either hikes or bikes from one city to the next, where he meets residents and learns about their lifestyles and local culture.

Zraiee has trained in electronics, but the lack of employment opportunities in Gaza has left him jobless. According to the Palestinian Central Bureau of Statistics (PCBS), the unemployment rate in February reached 42%. This pushed Zraiee to do something in life in line with his passion.

“Pack your equipment, and go anywhere. … explore your country.” That is how Zraiee sums up his tours, which get him out of his own routine for three or four days at a time. He cooks in a small tent that he carries with him. He might sometimes have company at dinner, if some of his friends accompany him on his travels.

Zraiee says that his bike and tent at times initially elicit negative reactions from residents, but that he tirelessly strives to establish good relations with them. They often end up introducing him to their daily routines and recommending camping areas worth visiting.

The Gaza Strip, with an area of some 140 square miles, is something of an archaeological gem, with more than 15 archaeological sites, 20 ancient mosques and three ancient churches. Yet much of this is crumbling due to government neglect. Zraiee says he wants to exploit social media to create awareness and encourage visits to what remains of Gaza's heritage.

Among the places Zraiee has visited is the Barquq Fort, the fifth most important Islamic monument in Palestine, located in Khan Yunis. It dates to the 14th century. He has also traveled to Saint Hilarion, the oldest monastery in Palestine, and explored the Qissariya Market, or Gold Market, in Gaza City, as well as the Orthodox Church of Saint Porphyrius, the oldest active church in the city.

“When I visit [new] places, I feel happy and enjoy them in silence,” Zraiee said. “I touch on all the corners of the places and imagine how many people before us passed through them.”

He also said, however, “I feel extremely sad to see places that have stood through time, and yet are at risk of disappearing because of our neglect.”

This past summer, Zraiee led the Hiking Challenge: From the Crossing to the Border. On July 14, he and 30 others walked the 33 miles from the Erez crossing, in the north, to the Rafah border crossing, in the south. The journey took 10 hours.

Zraiee's ambition is to become the foremost Palestinian tourist and to document the history and traditions of all Palestinian cities. After that he would like to become a globetrotter. “I aspire to visit all the countries around the world, discover their cultures and other interesting aspects and introduce them to mine,” he said.