Turkey is closing in on the Kurdish stronghold of Afrin in northern Syria. 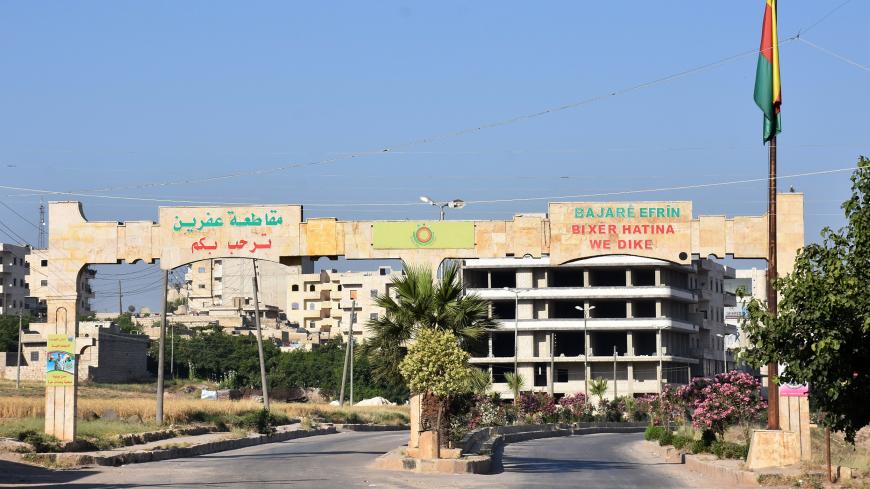 The main entrance to the city of Afrin, along Syria's northern border with Turkey, Afrin, Syria, June 9, 2017. - GEORGE OURFALIAN/AFP/Getty Images

Afrin, a small piece of Syria abutting Turkey’s Hatay and Kilis provinces, is known for its olives and pomegranates as well as its stubbornly resistant Kurdish population. This land where Kurds have been living for a thousand years is now Turkey’s primary target, but not because it poses a threat to Turkey’s borders. While Atme, Azaz and Jarablus were scenes of violent clashes, Afrin had remained calm.

Today, the Turkish Armed Forces (TSK) and National Intelligence Service are focusing on Afrin because of the local population's strong support for imprisoned Kurdistan Workers Party leader Abdullah Ocalan. Afrin had been under occasional artillery harassment by the TSK and its local allies in the Free Syrian Army and is now under pressure from the south. The TSK set up a command center on Sheikh Bereket Hill overlooking Afrin, followed by new bases at Salve, Daret Izza and on Seman Mountain.

“The operation at Idlib is mostly done with. Now, as I said earlier, we could suddenly come one night,” Turkey’s President Recep Tayyip Erdogan said on Oct. 24 at the Justice and Development Party's parliamentary meeting.

According to pro-government Turkish news reports, the TSK will launch its Afrin operation from Azaz and Seman. Its objective is to take control of an 80-mile (130-kilometer) stretch from Azaz to Daret Izza and Deir Ballut. The reports claim that if the TSK succeeds in Afrin, it will carve out a corridor from Harem, Serakip, Sermin, Jisr ash-Shughour, Khirbet Al-Joz and Turkmen Mountain all the way to the Mediterranean Sea.

It is a very ambitious and risky plan. But local sources also talk of a different scenario, saying a strong local resistance is likely. In this case, a corridor would need to be established between Azaz and Idlib to totally encircle Afrin. This operation would require the capture of Tel Firat in addition to Cinders and Seman.

According to Turkish news reports, the TSK has completed its preparations and is now awaiting orders to advance.

But the Turkish media seems to be ignoring that orders for the operations were issued some time ago. A new order could only be for a new ground offensive.

Al-Monitor obtained from Kurdish sources a log of the attacks targeting Afrin over the past two months. It shows a narrowing ring of fire around Afrin to erode the People’s Protection Units (YPG) to open gaps in its defensive lines and intimidate the population. But Afrin’s mountainous topography and the strong sense of unity among the population provide the area with strong defenses.

Although it has been under heavy pressure since 2013, Afrin is part of the Rojava democratic autonomy project and has survived economically, even while immigration has taken its original population of some 400,000 to 1 million people. Afrin enjoys ample water and agricultural resources and succeeded in creating and operating robust civilian and military administrations. Ankara sees this structure as the framework of a terrorist organization.

“Turkey has been hitting Afrin for a long time. There were several attempts to enter the area on the ground, but the YPG and the YPJ (Women's Protection Units) did not allow it. Its local Civilian Defense Force has also been active. People are prepared to defend themselves. I am talking about thousands of people who pull guard duty at night,” Ozgur Serhat, a journalist working in Afrin, told Al-Monitor. “People are inured to pressure. They are not afraid but angry because of incessant rocket and mortar fire. Farmers cannot work their fields near the border. It is also the pomegranate season. Soon olives will be ripe for harvesting. I just spoke to a farmer who said his pomegranates are left on the trees because every time he goes to pick them, he comes under fire. They are destroying olive trees and setting fire to fields … the main sources of income of the people. If Turks enter on the ground, people will resist. They don’t have heavy weapons but are determined to resist.”

The Kurds are confident in their self-defense forces and believe that despite Russia's cooperation with Turkey and Iran, the deployment of Russian troops in the area indicates that Moscow will prevent Turkey from entering Afrin. Last August, the Russians deployed observer forces in the area the Kurds call Sheba that also covers Tel Firat. “The mission of Russian forces together with the YPG and Jaish al-Suwar is to ensure security of Sheba and Afrin,” the YPG said in a statement on Oct. 29.

But there is a limit to the assurances the Russians can give to the Kurds in defiance of Turkey. Turkey's confidence has grown after scoring gains against Kurds, particularly in Iraq.